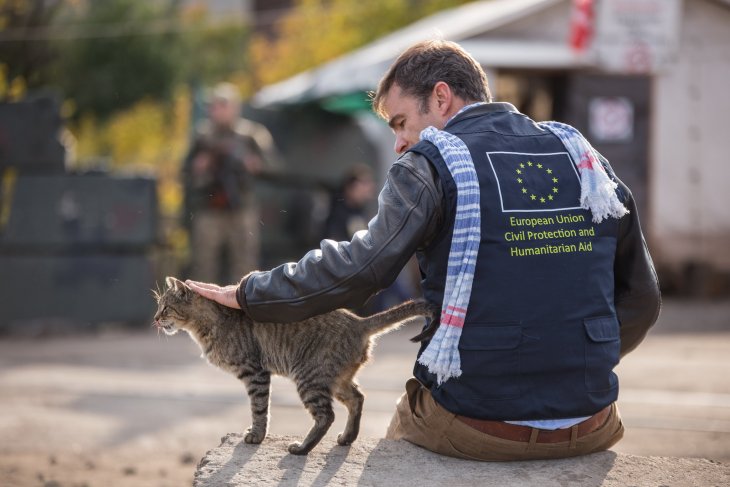 A striking imagery coming out of Ukraine is that of a mass flow of displaced pets, accompanied by continuous updates about abandoned pets, animal shelters and zoos inside besieged and bombed-out areas.

The care for animals rapidly became a part of the humanitarian narrative of the attack on Ukraine, with innumerous heroic accounts of the efforts of activists, shelters and zoo staff to keep animals alive, as well as underground operations to get them to safety.

Advocacy efforts by national and international animal rights groups have pushed receiving countries to modify entrance requirements, wave fees, shorten or eliminate quarantine times, or introduce new types of “animal passports”. The EU uses a special derogation in Regulation 2013/576, which allows refugees from Ukraine to import their pets into the EU without meeting standard requirements. In an unprecedented development, many governments signal a willingness to accommodate the passage of pets with or without their owners, and even without documentation, rabies vaccination and/or microchip.

…there has been little academic
attention to pets and war…

So far, there has been little academic attention to pets and war – including the crossing of humanitarian borders. Here I draw on perspectives from disaster studies, international humanitarian law (IHL), refugee studies and animal studies to map out three problem framings that can provide the starting point for a discussion.

I argue that this points to the larger issue of speciesism and paternalism – and how we can confront the moral problem of the anthropocentric bias when calibrating critiques of the humanitarian border.

Humanitarian action is essentially human-centric. When discussing the protection of pets during war and conflict there is a concern that alleviating the extreme suffering of human beings during hostilities would be impaired if animal protection is considered, or that this would amount to “species treason”.

…protecting the pets of Ukrainians raises uncomfortable questions about the politics of care and attention.

A recent example illustrates this well: in what has become known as the Afghan animal airlift, Boris Johnson was revealed to have authorized the evacuation of 94 dogs and 68 cats from Afghanistan when the Taliban seized control in August 2021. The animal rescue mission was led by a former Marine, who set up an animal shelter in Afghanistan after serving in the war in the mid-2000s. The Afghan staff was initially left behind. As Afghan refugees are now deprioritized by all large resettlement countries in favor of Ukrainians, there is no denying that the issue of protecting the pets of Ukrainians raises uncomfortable questions about the politics of care and attention.

A first step is to acknowledge the possible difficulties arising with an animal-centered protection discourse (the animal airlift may have come at the expense of Afghans), while also highlighting false trade-offs (the reception of dogs without quarantine in Norway does not come at the expense of refugee resettlement). Yet, it will be difficult to maintain clear-cut arguments: nothing stops veterinary expenses of hosting countries from being budgeted as “aid”.

A different way of approaching this dilemma is to consider the plurality of perspectives addressed in refugee studies. As noted by Ben White, to understand human displacements, past and present, we need to consider animals too. Recent work focuses on historical aspects of animals and refugee contexts; how camps are shaped by the need to accommodate animals as well as humans; the role of working equids (horses) in humanitarian emergencies; or the devastating impact of prolonged conflict on animal welfare and zoonotic disease risks in refugee and host populations. Moreover, in the context of climate change, there is a need to see animal and human migration together. Thus, going beyond the human/animal dichotomy, there is a broad set of policy and normative issues to be considered.

Disasters: The ethics of planning and non-planning

…more than half of the world’s households were thought to contain at least one companion animal.

Even before the pandemic, more than half of the world’s households were thought to contain at least one companion animal. In practical terms, it is necessary to make humanitarian policies for pets.

Disaster studies has a relatively longstanding focus on pets in the context of emergency planning, evacuations and shelter, in part ushered in by singular disasters such as the 2005 US Hurricane Katrina. Reforms are motivated by the recognition that people will protect their pets, even at the expense of their own security. Focusing on a wide range of events (flooding, fires and hurricanes), these perspectives offer important vantage points for discussing pets in war. Yet, they are also peacetime analyses of emergencies. They presuppose the existence of an essentially benevolent (if ineffectual) state and do not take violence against owners or the difficult priorities of deciding which human lives to save into account.

We should also recognize the politics and ethics of non-planning and non-inclusion of pets into preparedness planning and humanitarian programming. This is highly relevant with respect to the interface of animal and human health: we are familiar with the acute repercussions of animal emergencies and their catastrophic impact on groups of animals subjected to mass slaughter because of animal-human transmissions (such as Jacob-Creutzfeldt disease or avian flu). Where do mass displacement of pets feature in these kinds of animal-emergency scenarios? Ukraine is a high-risk country for rabies. Who is responsible for maintaining animals’ health, for example in regions that are rabies free? What kind of individual responsibilities rest on Ukrainian pet owners, and what kinds of responsibility – and legitimate expectations – do receiving communities have?

In the small but rapidly growing IHL literature scholars are now asking a range of questions regarding the classification and status of animals.

Historically, animals, including horses, camels, donkeys, mules, oxen, dogs, pigeons, cats, dolphins, sea lions, and even mice have been intrinsic to war efforts as “animal soldiers”. Much of the current IHL discussion focuses on the lack of specific protection for animals – and the problematic protection guarantees resorting from classifying animals as property. For example, Article 53 of Geneva Convention IV prohibits the destruction by the occupying power of private and public properties, except in cases of absolute military necessity. This provision could provide minimum protection to certain animals but only when considered to be items of private or public (or living) property. Conversely, it is argued that animals should be recognized as legal persons and treated as sentient beings, which would ensure animals greater protection than inanimate objects. At the same time, animals cannot be assimilated into the category of “protected persons” under IHL (“combatant/prisoner of war” or of “civilian”), because this status also incurs obligations animals are unable to undertake.

Towards a dismantling of the anthropocentric bias?

The three problem framings outlined in this blog are concerning a range of very different topics – from the regulations covering animal soldiers on the modern battlefield, to the status of livestock in refugee responses, to the challenge of animal emergencies such as the avian flu and the politics of pet evacuation during disasters. Still, they all point towards the increasingly contested underlying issue of speciesism and the anthropocentric bias of law.

In refugee law, it has been proposed that the refugee definition could be extended to animals…

Across the world, the status and rights of animals in many national jurisdictions are changing, with increasingly forceful advocacy for the recognition of animals as legal persons with full rights. In refugee law, it has been proposed that the refugee definition could be extended to animals, for example that many elephants meet the criteria in the refugee definition: they “have a country” in the relevant sense; they have a fear of persecution; they are displaced by that fear; and they cannot return to their country, or will not, due to their fear.

Yet, in the context of the humanitarian border, we must be aware that attempts to reorder the relationship between humans and animals can quickly become a legitimation of the practice of sorting humans, where some humans get to decide that animals should be prioritized over other groups of humans. At the same time, the de facto and the de jure accommodation of Ukrainian pet owners raises issues with respect to the expectations of future refugee populations that they will be able to bring and care for animals across international borders – and that resettlement programs will accommodate this.