The full-scale re-invasion of Ukraine, ordered by Russian President Vladimir Putin on February 24, came as a shock for many groups within the Russian elite. They are still assessing the consequences of that autocratic decision and adapting to the fast-deteriorating political and economic environment.

Meanwhile, Putin persists with rigidly confronting the West and apparently expects that the international sanctions, which personally target many beneficiaries of his regime, will force a consolidation of the elites inside “fortress-Kremlin” (Eurasia Insight, June 2). 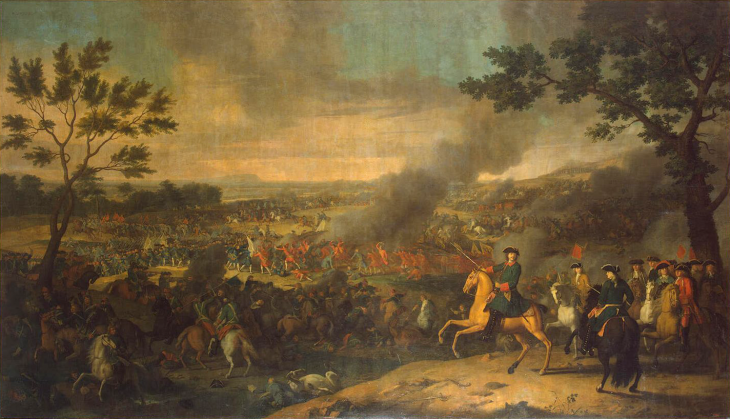 Putin has increased his presence in the public space last week and compared himself with Peter the Great. Peter I at the Battle of Poltava in 1709. Louis Caravaque

Asserting his monopoly over decision-making, Putin increased his presence in the public space last week and notably likened himself to Tsar Peter I (the Great) (Kommersant, June 10). The comparison with the emperor-reformer is flawed in many ways, but one informative reminder is that Peter’s death, at the age of 52, opened up a period of fierce elite squabbles.

A possible change at the top

Putin’s peculiar obsession with his own health is a subject of much speculation and countless jokes; nonetheless, all stakeholders in the stability of the Russian state have to make plans for his sudden departure (Svoboda.org, June 10).

Many of Putin’s closest subordinates — from Nikolai Patrushev, the long-serving secretary of the Security Council, to Sergei Chemezov, the CEO of the defense conglomerate Rostec — are in the same 70-something age cohort. But it is the younger generation of courtiers who are actively positioning themselves for a possible change at the top (Meduza, May 31).

Dmitry Medvedev, the former president, former prime minister and presently a deputy head of the Security Council, has reinvented himself as the most ardent supporter of the “special military operation” against Ukraine; though he has gained more ridicule than respect (Rosbalt, June 7).

Sergei Kiriyenko, another former prime minister and currently the deputy chief of staff of the presidential administration, has taken the initiative to lead the political project of annexing the conquered Donbas; and he has insinuated himself into the group of Putin’s hypothetical successors (Meduza, June 8). In contrast, Prime Minister Mikhail Mishustin, formally the second person in the state hierarchy, prefers not to partake in “patriotic” reality shows, but he claims credit for stabilizing the state’s finances under the pressure of sanctions (Forbes.ru, June 10).

In turn, Russia’s business elites find that embracing the war seriously cuts into their profits, but distancing themselves from the Kremlin’s foreign aggression is personally risky.

Oleg Mitvol, the former deputy head of the Russian environmental inspectorate Rosprirodnadzor, who back in the mid-2000s compelled a consortium of oil companies led by Shell to transfer a controlling stake in the Sakhalin-2 project to Gazprom, was detained last week in Krasnoyarsk, while trying to board a flight to Dubai (RBC, June 10).

Many Russian entrepreneurs have sought to depart quietly to this safe heaven, while some veteran-oligarchs, like Roman Abramovich, attempt to challenge the sanctions in Western courts (Obozrevatel.com, June 9). They hardly expect a quick favorable decision; but they may count on a softer attitude in a situation of possible ceasefire, when most heavy-hitting measures likely remain in place but personal sanctions could be fine-tuned (Russiancouncil.ru, June 8).

Putin’s absence is a key feature of this hypothetical picture. And for many beneficiaries of the deeply corrupt regime, his vision of reconstituted Soviet-style control over a re-centralized economy is entirely disagreeable (Riddle, June 6).

Oligarchs presumably have too much to lose to spell out their disapproval of the “special military operation,” but many prominent figures among Russia’s cultural elites have no such inhibitions.

High-volume propaganda duly amplifies the effect of targeted punishments of dissident Russian authors like Dmitry Glukhovsky; yet the anti-war voices of such bestselling writers as Boris Akunin or Dmitry Bykov carry more weight among the reading public than TV-propagandists can deliver (Meduza, June 7).

Music reaches even further. And Alla Pugacheva, a superstar of Soviet show business, has added her clout to the furious anti-war performances of such popular rappers as Oxxxymiron (Moskvichmag.ru, May 26). Putin may be unaware of the unique role underground rock played in the decay of Soviet ideology, but several veteran-rockers, including Boris Grebenshchikov and Yuri Shevchuk, now stand tall against his war (Novayagazeta.eu, June 11).

This cultural opposition makes it difficult for the government to produce a convincingly unassailable narrative glorifying the attack on Ukraine; and the security services are concerned about potential shifts in public opinion, already manifesting themselves in various subtle forms, from theater productions to street art (New Times, June 6).

Repressive legislation is expanding, but resources for its enforcement are not, as many paramilitary National Guard (Rosgvardia) units have been deployed to Ukraine to maintain order in the occupied territories (Mediazona, June 8).

Putin’s siloviki (security service personnel) may be disconcerted by the spread of war-time discontent, but it is the military elites who are increasingly frustrated by the contrast between the policy of preserving “normal life” in Moscow and St. Petersburg and the harsh reality of the protracted war they are left to wage (Nezavisimaya Gazeta, June 9).

It is uncertain to what degree Putin tries to control tactical combat engagements (his attention span is widely known to be capricious), but the pressure on the generals to deliver victories is clear — and results in high casualties even among commanding officers, with Major General Roman Kutuzov being the latest addition to the official list (The Insider, June 5). Putin keeps bragging about hypersonic missiles, but it is artillery that dominates the Donbas battlefields, and the hard shelling makes the warfare highly manpower-intensive for both sides. However, in the absence of a (politically problematic) general mobilization, reserves are not arriving quickly to the depleted and demoralized Russian battalions (UNIAN, June 11).

Lessons from the trenches for the top brass may be quite different from the assessments that business elites (deprived of their yachts and jets) make regarding broken supply chains, but the prospect of a war of attrition is disagreeable for all parts and segments of the Russian ruling class.

And though Western sanctions may have enforced greater unity among the targeted oligarchs, bureaucrats and siloviki, their loyalty toward the pinnacle of the power pyramid could suddenly waver as they start to draft fortune-securing and career-saving plans for themselves.

Fidelity to the Putinist system has long been the crucial condition for survival in this corrupt environment, but the ritual demonstrations of obedience and adoration are merely a cover for cynical self-interest; and in the inclement climate of war, this cover is fast wearing thin. Putin tries to make sure that individual betrayals are punished, and collective action still remains foreign for the fragmented elites. Yet they can find quite a few historical inspirations when it comes to ridding themselves of an otiose autocrat.