To paraphrase Mark Twain, the reports of the UN Security Council’s death have been greatly exaggerated.

That does not mean to say that the legitimacy crisis is not real nor that the long-term trajectory – escalated by the Russian invasion of Ukraine – might not be terminal. The consequences for states in weaker positions and for the international norm on women, peace and security (WPS), a framework promoted and formalized over decades of harsh fights in the Council, can be detrimental. 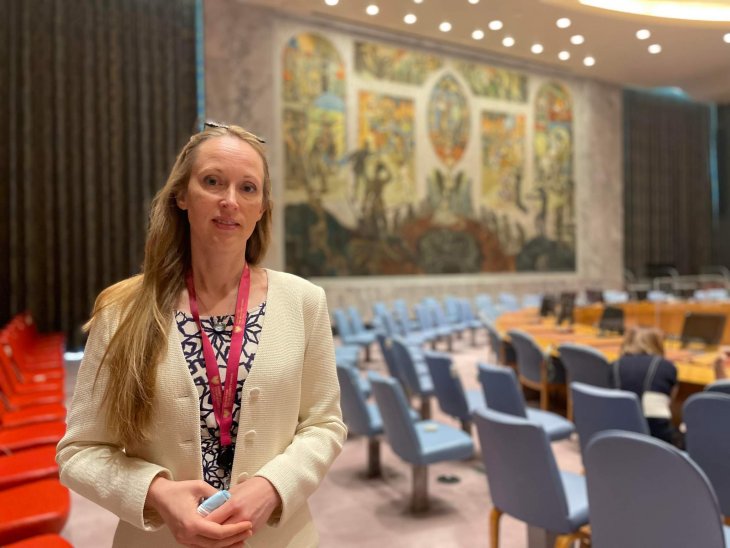 As stated by Dag Hammarskjold: “It is not the … big Powers who need the United Nations for their protection. It is all the others.”

We arrived in New York to better understand the crisis of the UN Security Council (UNSC) following Russia’s invasion of Ukraine. That the Russian veto has resulted in a failure to prevent or halt the aggression, a direct breach of the UN Charter, has undoubtedly taken a large toll on the Council’s already weakened legitimacy.

I have met many for which the UNSC, and perhaps even the UN, is considered outdated and obsolete. The inability to handle the Ukraine crisis just constitutes the final nail in the coffin.

But before we consider abandoning the current multilateral institution that is the UN, there are two questions we should answer.

First, what roles do the UN and its Security Council fill for state relations and for the normative framework it has created on women, peace and security?

Many states have larger diplomatic delegations in NY than they have in most countries. Why? Because in the hub that is the UN, a sizable part of many countries’ foreign policies plays out on a daily basis. This means an endless stream of countless negotiations and consultations, something which allows for handling misunderstandings, clarifications of positions, and resolving a range of low-grade conflicts. State relations to a high extent consist of actual meetings between people representing states, rather than only the abstract formal rules or institutions we sometimes depict in lecture halls and public debates.

Those that argue that the UN is just ‘talk’ underestimate the function this has for the majority of state interactions.

In fact, at this core hub, the international norm on WPS has been developed and now integrated into the seamless and endless web of dialogues that constitute state relations; resulting in real possibilities of addressing the serious problems that the norms were created to handle. As demonstrated by Zehra Arat, the UN has constituted a fundamental and successful arena for a multitude of diverse interest groups for forwarding women’s rights over time, including in the context of peace and security through the UNSC resolutions.

WPS and women’s rights are also part of the current debate on Ukraine. A recent example is the UNSC debate on the Maintenance of peace and security of Ukraine with a focus on conflict-related sexual violence (CRSV) and trafficking held on June 6th. It constituted the 23rd meeting held on Ukraine since the invasion. The meetings have been used to bring into the light the many hideous and devastating effects that the invasion has caused, and to maintain pressure on the invading state. At this meeting, the Ukraine Ambassador sat at the table where a war of words was fought, just a few seats down from Russia. A civil society organization took part online from Ukraine, hovering over the room from the screen above the table, expressing views from the conflict area.

CRSV has become a recognized form of war violence…

Unlike wars prior to the work on WPS, CRSV has become a recognized form of war violence, and women’s agency in contributing to prevention was portrayed as central. I remember when that perspective was considered impossible and irrelevant – and it is not that long ago.

Is this sufficient as we watch the war in Ukraine unfold? No. But as expressed by the ambassadors we interviewed, the UNSC is an important platform where Ukraine can meet Russian narratives head on and in full view of the world as debates are broadcast.

Moreover, there are a number of serious humanitarian situations and wars ongoing in addition to Ukraine. Research has demonstrated that warring actors actually tend to listen to what the UNSC says and there is a concern from many states that the crisis of the UNSC will result in weakened ability to address the many crisis of the world.

We do not yet have an agreement on another forum that could replace this function of the UNSC as a hub of states facing each other, pressuring each other, supporting each other, or continuing dialogue. And that is a serious concern. Could the situation deteriorate further without the UNSC? Definitely. Relations between the nuclear weapon-holding states in the Council are sinking below freezing. In NY, the diplomatic channels in the near daily work of the UNSC remain open, something which could turn out to be vital for international peace and security.

Second, do we have another encompassing multilateral platform for creating and upholding norms on women, peace and security that can obtain international legitimacy?

The UNSC, with all its faults, is the only body with the right to adopt decisions on peace and security at the highest international level. The efforts by other states to hold them accountable for how the members practice this power has grown.

This is evident by Lichtenstein’s successful attempt to get the UNSC members to agree that when they place a veto, they have to come and explain their reasons to all other members in the General Assembly (GA).

Moreover, while the permanent members’ legitimacy is in question, the elected members still represent the broader constituency of the world’s states, precisely due to their role as elected representatives. This continued effort to create alliances and cooperation between the GA and the UNSC is important as the space for working for WPS in the Council could potentially deteriorate over time if it is not backed up with the support of states in the GA.

… the ones protected by the norms created and upheld at the UN are mostly smaller states and their peoples.

Ergo, as resistance to WPS increases in some quarters, the UN constitutes the only truly joint hub where there is the highest chance of forming broad global alliances to maintain the gains on WPS. In fact, with the growth of more authoritarian approaches among the dominant powers, it can be good to remind ourselves of Hammarskjold’s observation that the ones protected by the norms created and upheld at the UN are mostly smaller states and their peoples. In that sense, the UN constitutes an arena where joint protests could be launched.

Still, I hear more and more arguments that we can just abandon the UNSC and continue to progress WPS outside of the UN. It is an important debate to have. In fact, by now, many regional organisations and states have adopted their own frameworks on WPS.

Significant to remember in this conversation, though, is that many of these still refer back to the decisions at the UNSC in order communicate consistency and agreement. This is particularly critical when these policies are to be applied in contexts outside of the territory of that organization or state. It is difficult to see how this norm could be further pushed and maintained internationally without an anchoring at a multilateral organ such as the UN; particularly as the role of the elected members, i.e. state representing the GA, to the Council have played a key role for its creation. Hence, it would be a gamble to abandon the UNSC anchoring without a realistic, better option. At stake are the security and influence of actual people and states.

All is also not lost in the UNSC. While women’s rights have become more questioned and at risk of being negotiated out of UNSC decisions, even the current crisis does not appear to have rocked the foundation of the norms to the core.

At the latest resolution on the UN mission in Afghanistan, negotiated by penholder Norway even after the Russian invasion, all states in the Council agreed on extensive language on women’s rights. This went through even with Taliban concerns, a matter that could have swayed some of the P5s. That the Council has created the WPS norm and reaffirmed it in their own resolutions matter.

In fact, our project, Tracking and analyzing WPS in the Security Council, mapping WPS language in Council resolutions adopted in the last five years, shows that the UNSC has moved from primarily focusing on women as victims to recognizing their rights and agency – participation catching up with protection references in UNSC resolutions. These are gains for which maintaining a functioning UN is central. It does not mean that reforms and continuous efforts to improve UNSC functionality are not absolutely necessary.

“It is very easy to resign; it is not so easy to stay on.”

Hence, while many of us agree that something better than the UNSC is needed in order to promote conflict resolution and to forward norms on women’s rights in matters of peace and security, the questions remain as to what that something should be and how it could be realistically created?

This is something we need to answer before we are tempted to abandon or dismantle what we have. As noted by Hammarskjold: “It is very easy to resign; it is not so easy to stay on.” For now, to paraphrase him, we should keep believing in the collaboration that is the UN. We should remain in our post.

This blog constitutes personal reflections based in three ongoing projects:

Louise Olsson is a Research Director and Senior Researcher at PRIO.