If nations are separated by national borders, the risk of civil war and interstate conflicts increases – as in the case of Ukraine. For this reason, Lars-​Erik Cederman believes that sanctions should also be designed to have a deterrent effect on other nationalists. 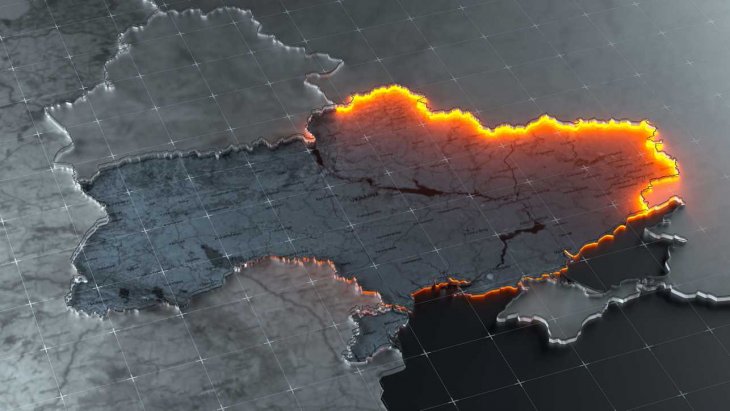 Ukraine’s borders are to be shifted by force. Image: Adobe Stock

For numerous observers in the West, Putin’s invasion of Ukraine came out of the blue. Hopes of a cooperative, economically interwoven, and practically borderless world have been dealt a serious blow. In many ways, Russia’s annexation of Crimea in 2014 heralds the “return of geopolitics.”1 A large number of analysts, especially those of a realist persuasion, expect the Russian aggression to result in a return to the old-​fashioned, multipolar great-​power politics of the 19th century.2

But does realist theory depict this ostensible anachronism correctly?

Indeed, geopolitics is back with a vengeance, but the question is: which type of geopolitics? While various realists identify with the purportedly sober and sophisticated 19th-​century masters of Realpolitik, their perspective seems oddly anachronistic, even by 19th-​century standards. Great-​power competition, the law of the strongest, and territorial conquest dominated international relations long before the 19th century, and in some cases persisted beyond 1945.

The cosy relationship of power politics and nationalism

Our recent research suggests that it is not so much century-​old geopolitical forces as the ideology of nationalism, which emerged in the 19th century, that helps us put Russia’s actions in historical context.

… the ideology of nationalism […] helps us put Russia’s actions in historical context.

While realising that power politics and nationalism are intimately related, realists have – in my view – so far failed to integrate the core premise of nationalist politics into their theoretical edifice.3

Drawing on the lessons Clausewitz learned from the military might of the French citizen army in the Napoleonic Wars, many of them view nationalism primarily as a “power booster” within fixed state borders.4 National leaders deliberately employ nationalistic indoctrination in order to kindle their population’s enthusiasm for going to war – wars that then serve security-​policy and geostrategic aims. In my view, this all-​too-instrumental, nation-​state-based perspective blinds us to the radical, potentially border-​shifting power of ethnic nationalism.

Ernest Gellner has argued that making nationalist principles reality required aligning political and national boundaries.5 Since most national communities in 19th-​ and early 20th-​century Europe were constructed around ethnic, and frequently linguistic, cores, nationalist grievances served as a rallying cry for political action wherever ethnic groups found themselves under alien rule by another nation or divided by state borders.

When “nation” and “state” are incongruent

In a recent working paper, we show how deviations from Gellner’s nationalist congruence principle shaped patterns of warfare in Europe between 1816 and 1945.6 Newly collated geographic data on ethnic population distributions and state borders since the start of the 19th century allow us to systematically identify state-​to-nation mismatches and to test how they relate to both domestic and interstate conflict.

Our findings indicate that relatively large ethnic minorities under alien rule by another group are significantly more likely to start secessionist civil wars. This risk almost doubles when politically powerless groups are kept apart by state borders. Both conditions apply to the Russian-​identifying population in Ukraine, which formed the main support base for separatist violence against Ukrainian troops in the Donbas.

Nationalist violence is by no means limited to domestic civil wars. Where an ethnic nation is divided by a state border, and controls the government on one side but faces alien rule on the other, the risk of irredentist interstate conflict runs high. Nation-​states with powerless co-​ethnics in neighbouring states are significantly more likely to make territorial claims or fight militarised disputes against the ethnically distinct “host government” across the border than states without such links.

Putin’s annexation of Crimea, the current invasion, and claims on eastern Ukrainian territory fit precisely into this pattern

Putin’s annexation of Crimea, the current invasion, and claims on eastern Ukrainian territory fit precisely into this pattern. Taken together, these findings suggest that civil and interstate wars are more closely related than often acknowledged. In 19th-​ and early 20th-​century Europe, both types of conflict were frequently fuelled by similar ethno-​nationalistic ideologies. Our analyses also reveal that both types of war can reinforce each other, as Russian support for the separatists in eastern Ukraine and the annexation of Crimea in 2014 illustrate.

How an idealised past increases the risk of war

Studying state borders and ethnic group distributions from a geographical perspective is only a first step toward understanding the violent potential of ethnic nationalism. To better predict which state-​to-nation mismatches are likely to cause war, we need to get to the bottom of ethnic nationalists’ obsession with history.

In a second working paper, we show that incongruent borders are more likely to be contested by violent means if nationalist rulers can contrast current division and alien rule with supposedly more unified and independent “golden ages” in the past.7 Revisionist conflicts are especially frequent when past state borders incorporated significant areas of national territory now being claimed – in other words, if the territory currently inhabited by the ethnic nation previously belonged to their “own” state.

Putin has repeatedly lamented Russia’s lost unity as a result of the breakup of the Soviet Union. Essays8 and speeches9 reveal a motivation to restore Tsarist imperial glory. Putin and many other nationalist leaders frequently go back centuries to unearth medieval kingdoms, early modern territorial states, or empires that allegedly satisfied the nationalist ideals of ethnic unity and home rule.

Russia’s territorial revisionism in Ukraine is indeed a throwback to the 19th and early 20th centuries.

When modern notions of national consciousness are projected onto pre-​modern populations and lines of ethnic continuity are constructed across centuries, they rarely stand up to scrutiny. Nonetheless, ethnic nationalists are frequently very adept at blending historical facts with myths and assertions in order to form self-​serving narratives.

Our analyses clearly show that nationalist conflict has fortunately become an extremely rare phenomenon in post-​1945 Europe. In this sense, Russia’s territorial revisionism in Ukraine is indeed a throwback to the 19th and early 20th centuries. Russia’s nationalism is a challenge to precisely those post-​war liberal norms and institutions that were developed to effectively contain this quintessentially European ideology.

Setting a bad example for other nationalists

Against this backdrop, the outcome of the war in Ukraine is crucial for the future world order. Should Russia be perceived to have won, there is a risk that revisionist nationalists elsewhere will take note. A hollowing-​out of the norm of territorial integrity could pave the way for further destabilising events.10 Most ominously, China’s irredentist desire to bring Taiwan “back into the fold” increases the risk of a major war in the region.

Western sanctions against Russia are crucial, both as a punishment and a deterrent

Within Europe, there is the risk that Serbia and Hungary might more offensively mobilise grievances around ethnic division and lost unity. For these reasons, Western sanctions against Russia are crucial, both as a punishment and a deterrent. Following the naïvely realist analyses of current events puts us at risk of being as surprised by the subversive force of nationalism as Prince Metternich was in 1848, when nationalist turmoil forced him to resign.

1 Mead, Walter Russell.  2014.  “The Return of Geopolitics: The Revenge of the Revisionist Powers.”  Foreign Affairs 93

8 On the Historical Unity of Russians and Ukrainians, Wikipedia.