Russia’s attack on Ukraine has clearly lost momentum, but the intensity of its multi-prong confrontation with the West keeps rising.

Russian military command announced an “operational pause” in Donbas after the hard battles for Severodonetsk and Lysychansk, implicitly admitting that a regrouping of battalions, which have not been rotated in four months of fighting, is necessary before the push to Slovyansk (Izvestiya, July 7).

This inability to sustain offensive operations contrasts sharply with Russian President Vladimir Putin’s words that “we have not even started anything in earnest” in Ukraine (RIA Novosti, July 8). Putin’s boasting departs only slightly from the usual assurances that the “special military operation” is going perfectly according to plan, which in retrospect appears strategically incomprehensible (Svoboda.org, July 5). 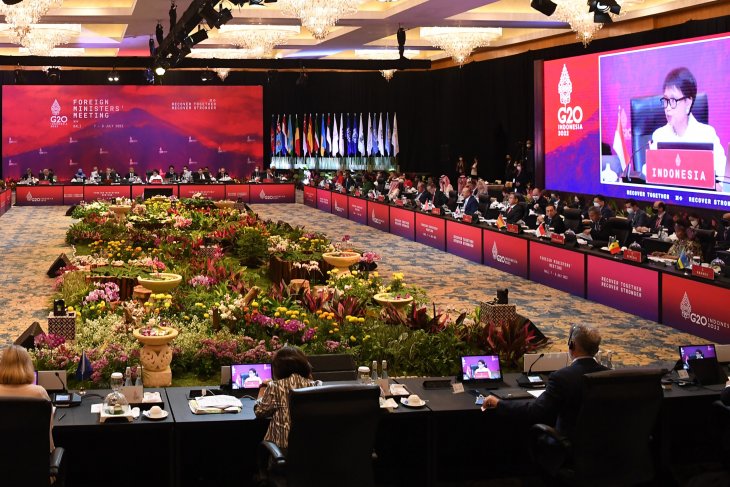 The meeting of G20 foreign ministers in Bali, Indonesia, in early July showed that Moscow has little influence on the world order’s course. Photo: G20

Attempts to pin blame for the war on the collective West also fit the Kremlin’s usually embellished discourse, but the idea that the West-enforced world order has been decisively broken from day one of Russia’s military operation rings more discordant than most harangues about a multipolar world (Kommersant, July 8).

Putin appears to believe deeply in the global and historical impact of his decision to invade Ukraine, so much so, that the failure to crush a neighboring state he perceives as an artificial construct is camouflaged by the presumed breakdown of Western influence over the world order.

… in reality, the transformation of the world order proceeds more constructively and less chaotically than the Kremlin imagines.

He is conveniently blind to the paradox that aggression driven by imperial ambitions is supposed to reinforce the anti-Western and anti-imperial aspirations in the Global South (Globalaffairs.ru, July 4). The Russian leader’s resort to brutal force according to the old-fashioned exploitation of war as an instrument of policy may answer some deep concerns in Russian public opinion, but it certainly alarms most non-Western audiences that traditionally support Russia’s bold stance against the collective West (Republic.ru, July 5). The Russia Federation’s assault on the basic rules of the international order reverberates strongly in energy markets and imperils global food security. But in reality, the transformation of the world order proceeds more constructively and less chaotically than the Kremlin imagines (Svoboda.org, July 4).

The meeting of G20 foreign ministers in Bali, Indonesia, in early July illustrated this unsteady process and showed that Moscow has little influence on the world order’s course. Furthermore, the G7 has strengthened its profile because of regained unity in recent months (Russiancouncil.ru, July 7).

Russian Foreign Minister Sergei Lavrov had little to contribute to the discussions on matters of global concern and focused more on countering the Western boycott against him (Izvestiya, July 9). Lavrov sought to lay the groundwork for Putin’s participation in the future G20 summit scheduled for mid-November 2022, but the possibility of Putin’s in-person presence does not look probable (Forbes.ru, June 27).

Big and small states of the disunited and disconcerted Global South may show little interest in joining the sanctions regime against Russia and even try to benefit from buying Russian oil at a discount, but these nations are certainly not ready to express any solidarity with Moscow’s brutal aggression (Kommersant, July 8). The meeting ended without a joint statement and group photo, and Lavrov’s scorn regarding UK Prime Minister Boris Jonson’s resignation did not earn him any diplomatic points (Mid.ru, July 8).

Perhaps the most consequential meeting on the sidelines of the G20 gathering was between US Secretary of State Antony Blinken and Chinese Foreign Minister Wang Yi; Moscow has good reason to follow this dialogue with especially keen attention (Rbc.ru, July 9). Russian policymakers have worked on the assumption that the fundamental conflict between the United States and China is the main driver in the breakdown of the international order, and the escalation of this clash — seen as inevitable — will divert Western attention from the Ukraine war and grant Russia an opportunity to escape from the deadlock in Donbas.

Russian leaders are therefore not overly upset about the lack of material support from Beijing in the current conflict and seek to boost ties with India and Vietnam (which Lavrov visited on his way to Indonesia) to reduce dependency on the Russian Federation’s neighbor (Nezavisimaya gazeta, July 5; Izvestiya, July 6). China demonstrates indifference to these activities and tends to shrug off Russian overtures to expand the United Nations Security Council by reserving a permanent seat for India, instead generally inclining to accept Moscow’s subordinate position (Rossiiskaya gazeta, July 4; Nezavisimoe voennoe obozrenie, June 23).

The region that best illustrates Russian perceptions regarding the world order is the Middle East, but Moscow is worried about the fast decline of its capacity for manipulating local conflicts there. The notorious Wagner Group, for example, is presently focusing on recruiting criminals in Russian prisons for fighting in Donbas rather than sustaining its activities in Libya (Meduza, July 8). Syria serves as Russia’s main anchor to the Middle East, and the Kremlin is trying its best to dissuade Turkey from launching another land-grabbing offensive and exploiting the reduction of Russian military presence in the country (Nezavisimaya gazeta, July 7).

Seeking to assert its key role, Russia opted to veto the UN Security Council resolution that would have secured the continuation of the flow of humanitarian aid into rebel-controlled Idlib province, much to Turkey’s chagrin (Rbc.ru, July 8). Growing tensions in the Middle East severely affect Russian interests regarding the fluctuation of oil prices, and the forthcoming visits of US President Joe Biden to Israel and Saudi Arabia are being watched with increased anxiety (Russiancouncil.ru, July 5).

A worldview distorted by war

The worldview from Moscow is increasingly distorted by the Ukraine war, but the high-risk decision to start this ill-planned invasion was shaped by the perception of a collapsing world order. Thus, at the time, the re-invasion of Ukraine was deemed the best option for Russia to accelerate this catastrophic process rather than wait for its consequences.

Russia [is left] not in the vanguard of a presumed historic process but on a collision course with it.

Yet, this preemptive strike has instead yielded results opposite of the quasi-apocalyptic expectations (perhaps influenced by the COVID-19 pandemic), as the collective West has restored its solidarity under re-energized US leadership. India and Turkey may prefer to collect benefits from staying neutral, but China — which did not want the war to spread and now does not want Russia to be defeated — is gradually coming to the conclusion that a gradual reconstruction, rather than a complete breakdown, of the evolving global system is in its best interest. This leaves Russia not in the vanguard of a presumed historic process but on a collision course with it. Even so, it will take plenty more resistance from a defiant Ukraine to ensure such an outcome.