Norway is becoming more secure. Not only will the military balance change, but also the geographical situation. 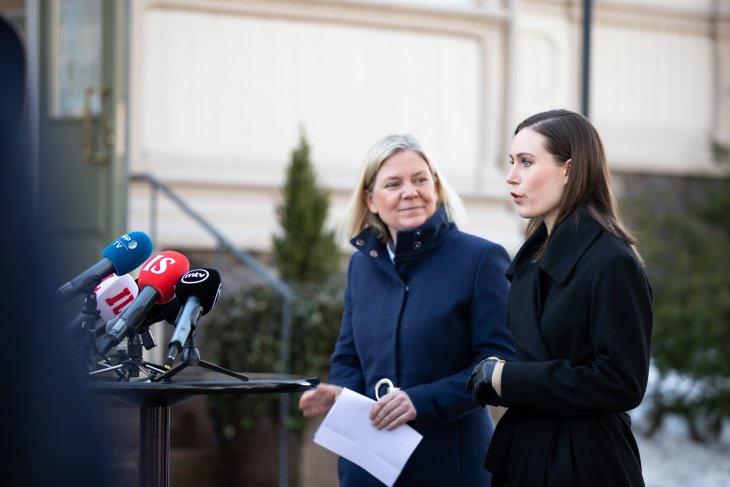 The Nordic region is now more militarily capable than it has been for centuries. And Russia is in a historically weak position. Norway was in an isolated position during the Cold War: we bordered two neutral nations, a threatening Soviet Union, and the cold Atlantic Ocean. If a war had broken out, Norway would have had to independently keep the Soviet Union at bay while waiting for help. Making sure we actually received such help would have made the task all the more difficult. We therefore invested vast resources to secure our country against a military attack, both money and personnel, up until right after the end of the Cold War.

… new technology has made it more expensive than ever for a small nation to uphold an armed force with a broad spectrum of capabilities.

When Putin’s Russia revealed its true colours by annexing Crimea, Norway was once again back in this isolated position with Russia as a threatening neighbour. In fact, in some ways our situation was worse: the arrival of new technology has made it more expensive than ever for a small nation to uphold an armed force with a broad spectrum of capabilities. For periods of time, we were entirely without such necessary capabilities, like surface-to-air missiles. A broad spectrum of capabilities is important when you are isolated geographically and have no allied bases on your territory.

However, Sweden and Finland in NATO transforms the new security situation to one that differs significantly from the Cold War scenario. We no longer need to look longingly over the ocean to the US, and across the North Sea to Britain, for help. While support from bigger NATO countries is still key in an armed conflict, we now have significant capabilities ourselves. The Nordic countries have a large number of fighter planes, the majority of which are so advanced that it is uncertain whether Russia would be able to shoot them down at all. While Russia has invested in 440 aircrafts over the past decade, Norway, Finland and Denmark have 150 new F35s, and Sweden can boast about a couple of hundred older, newly upgraded aircrafts. This is proof of the very real military power of the Nordic countries. The Nordic countries also have a vast number of foot soldiers and tanks, especially Finland. What is more, the Nordic countries would not face Russia alone. It would not be possible for Russia to solely focus on attacking us as they have been able to with Ukraine, as NATO’s Article V would mean that they would have to be prepared to defend themselves against NATO attacks from Poland, Turkey and the Baltic States, not only on the ground but also from the sea.

At the same time, there are two reasons why we should reassess the threat posed by Russia. The first, and of lesser importance, is Russia’s close to depleted military potential. The brigade based in Murmansk, the one Norway would face in a war, is practically obliterated. Russia has exhausted most of their inventory of precision-guided missiles. It is possible that they can produce replacements for lost equipment and ammunition, at least over time. Still, this would require finding replacements for Western technology that they no longer have access to due to sanctions.

The second reason for a reassessment of the threat from Russia is that we can now see that Russia never had a military force able to carry out large-scale offensive operations against determined defenders. The war has laid bare the fact that Russian military doctrines – their use of tanks, fighter planes etc. – are ineffective in the face of NATO doctrines taught to Ukraine by the US. Their equipment has essential defects, the technology they possess that actually functions is imported, and the pilots are poorly trained. Overall, it seems that the Russian autocracy is not capable of development, at least in a military sense. This was also the case prior to the war in Ukraine. Putin’s Russia does have intentions and ambitions that are worrying, but it does not have an equally worrying capability of acting on these ambitions. This is at least true when, hopefully in a short time, we can achieve a joint defence in the Nordic region, which will operate as an integrated part of a NATO command structure in the event of a conflict.

The role of the Armed Forces needs to change

A strong Nordic region and a weak Russia has several implications. First, it may no longer be necessary for the Norwegian Armed Forces to invest significant resources to ensure the capability to receive war-time support from allies. The Norwegian Armed Forces currently have three missions: directing defence of Norwegian territory, receiving allied troops, and joint military interventions abroad. Once Finland and Sweden join NATO, we will have significant military capability already stationed here in the Nordics. In any case, allied troops and equipment can now arrive through the Baltic Sea, where NATO will have complete dominance, and then through Sweden.

… it will … also be less important to impress the US with missions abroad.

This would imply a reduction of one third of the Armed Forces’ portfolio. Resources could be reinvested in more direct fighting power. With such a strong Nordic region, the US will lessen in importance for Norway’s defence, and it will therefore also be less important to impress the US with missions abroad. NATO membership for Sweden and Finland could potentially imply a reduction in the Armed Forces’ missions from three to one.

Secondly, the new situation should lead to a debate on whether we actually want to spend 2% of our GDP on defence. 2% is a target figure for NATO but it is voluntary for the individual nations. As mentioned, it will be of lesser importance to impress the US with missions abroad and significant investments. Thus, the question that remains is whether such a substantial investment in defence is necessary to keep Russia at bay.

Given the warnings from several political parties that we will not be able to afford our current level of welfare in the future, is it acceptable to sustain NATO at its present level of military dominance? It is true that it is less expensive to deter a war than fight one. Additionally, Norway’s defence capabilities in the North do not only secure the peace, they also prevent Russia from exerting pressure on us with military force. However, with Sweden and Finland joining NATO, we need to carry out new analyses to identify the minimum level of investments required by Norway and the other Nordic countries for securing a deterrent ability to prevent Russian aggression.

With Russia weakened and the Nordic region strengthened, a decent deterrent ability can be achieved with reduced capabilities.

This debate cannot be entrusted solely to military experts. It is a question of society-wide priorities. By acknowledging that no level of investments in the Armed Forces will give a guaranteed deterrent ability, it all comes down to a question of risk. We need to find a balance between how much risk we can tolerate and how many resources we are willing to invest in our Armed Forces in order to minimise this risk by means of deterrence. With Russia weakened and the Nordic region strengthened, a decent deterrent ability can be achieved with reduced capabilities.