The meeting in Sochi, Russia, on August 5 between Russian President Vladimir Putin and Turkish President Recep Tayyip Erdogan was more than just another chapter in the long track record of bargaining and testing the limits of mutual patience between the two leaders. 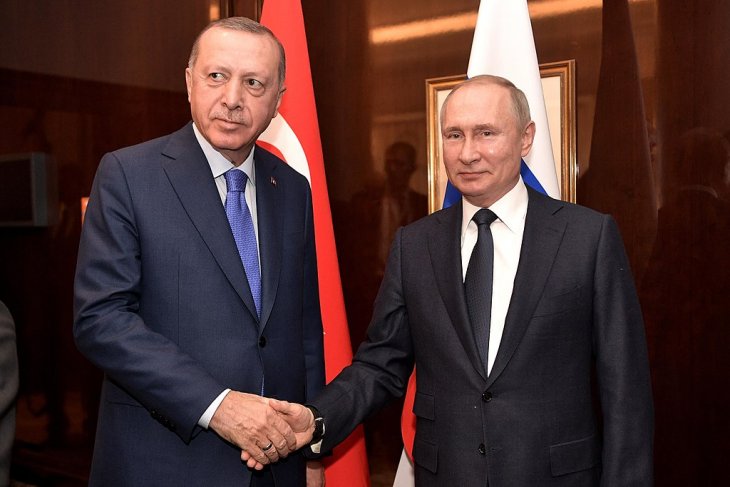 Putin’s war in Ukraine has badly damaged Russia’s international positions, and Erdogan can harvest benefits from transactional maneuvering in the margins of Moscow’s confrontation with the West.

The Turkish president has become an indispensable interlocutor for the Russian leader, who has not received a habitual phone call from French President Emmanuel Macron since late May and only rarely is granted the privilege of a conversation with Chinese President Xi Jinping. Erdogan decided not to stay for dinner in Sochi and cancelled the planned joint press conference, which he usually enjoys for dropping a sensationalist remark or two, leaving commentators guessing about the real outcome of the four-hour talks (Kommersant, August 6).

Energy matters were the main topic of conversation, but this was not a particularly rich agenda as Turkey remains exempt from Russia’s policy of manipulating the deliberately created gas crisis in Europe (Riddle Russia, August 3). Russian media emphasized the point in Turkey’s agreement to pay for imported gas partly in rubles, but the scheme for converting the cash flow into this tightly regulated currency has long been effectuated (Izvestiya, August 5). Moscow is truly interested in new channels for circumventing Western sanctions, particularly on imports of technologies for its defense-industrial complex, and Turkey offers plentiful opportunities for various murky deals (Nezavisimoe voennoe obozrenie, August 4). Putin is perfectly aware of the depth of the unfolding economic and financial crisis in Turkey, which to a large degree is a result of Erdogan’s misguided dirigisme, and the Russian leader is eager to press this opportunity (Moskovsky komsomolets, August 5). He is also keen to exploit Erdogan’s personal interest in the construction of the Akkuyu Nuclear Power Plant, where Rosatom has orchestrated new delays (Kommersant, August 5).

One success story that both leaders seek maximum credit for is the opening of the “grain corridor,” through which long-blockaded ships loaded with corn and sunflower oil finally started to leave the Odesa ports headed for Istanbul (The Moscow Times, August 3). These irregular shipments are certainly nowhere close to an exhaustive solution to the global food crisis, but Putin can at least pretend that he has taken to heart the concerns of the Global South about his weaponization of the grain trade (Svoboda.org, August 5). Erdogan can demonstrate to the United States and key European states that his mediation based on Turkey’s abstention from the sanctions regime against Russia bears tangible fruits and can present an appropriate platform for future peace negotiations (Novayagazeta.eu, August 3). The Turkish leader has earned no small amount of goodwill in Washington, DC, and Brussels by consenting to Finland and Sweden’s accession to the North Atlantic Treaty Organization (NATO), much to Moscow’s disappointment, and now, Erdogan hopes to capitalize on his gas-and-grain diplomacy (Russiancouncil.ru, August 4). He has been helped by a shift in the Kremlin’s military propaganda to focus attention on the US-supplied HIMARS mobile multiple rocket launchers and away from the Turkey-supplied Bayraktar TB2 combat drones, which wreaked havoc on Russian armored columns in the first few weeks of the war (Nezavisimaya gazeta, August 2).

Observers in Moscow maintain that another major theme during the Sochi talks was Syria, which was the main agenda item of the trilateral Iranian-Russian-Turkish summit in Tehran, Iran, on July 19 and was further discussed by Russian Defense Minister Sergei Shoigu and his Turkish counterpart, Hulusi Akar, without much progress (RIA Novosti, July 22). Tensions in northern Syria continue to escalate as Turkish forces prepare for a new offensive (announced by Erdogan in late May 2022) against the Kurdish People’s Protection Units (YPG) militia, which is aimed at capturing Manbij and connecting two sectors of the “security zone” (News.ru, August 6). The Kremlin is not particularly concerned about the plight of the Kurds, but it is worried that a Turkish operation would expose the weakness of the Russian military grouping in Syria, which is undersupplied after the closure of the Turkish straits to the Russian Navy. The recent naval parade in Tartus can hardly hide this vulnerability (Izvestiya, July 31). Seeking to placate Turkey, Russia granted consent on the delivery of United Nations humanitarian aid for six months to the Idlib province controlled by the rebels, but the economic situation in war-ravaged Syria remains desperate (The Insider, August 5).

Erdogan could have waited for a further weakening of Russian positions in Syria, but he needs to score a victory against the Kurds now, even at the price of reaching a compromise with the Bashar al-Assad regime because of growing domestic political pressure (Nezavisimaya gazeta, July 31). In Sochi, the Turkish premier tried to overcome Putin’s opposition by playing the Karabakh card, as Azerbaijan resumed military operations against Armenian forces in the Nagorno-Karabakh enclave (Rosbalt.ru, August 5). The small Russian peacekeeping battalion deployed there since the escalation of hostilities in late 2020 cannot make a difference in checking the ceasefire violations, but Moscow needs to hide its irrelevance (Kommersant, August 3). Azerbaijani President Ilham Aliyev is committed to achieving a lasting solution for the 30-year Karabakh conflict by military means, but Aliyev is prepared to coordinate the timing of this triumph closely with Erdogan — his closest ally (Forbes.ru, August 5).

The intensely competitive character of Russian-Turkish interactions is covered by the veneer of carefully polished cooperation between Putin and Erdogan, who each have a perfect measure of the other but now need to adjust their smiles and squabbles to a new trouble-rich set of circumstances. Putin would have rejoiced with making Erdogan a key sanctions circumventor, but the Russian president needs to grant his difficult counterpart not only superficial respect but also some real concessions to prop up the Turkish leader’s domestic standing. Elections in Russia are so rigidly controlled by the Kremlin that Putin may not fully comprehend Erdogan’s electoral issues, but he certainly wants his partner to stay in power for years to come.

For Erdogan, bargaining with Putin is often profitable, but it is also means to a larger extent upholding his reputation in the US and European Union — Turkey’s crucially important economic partners and security allies. Ankara stands to benefit from Moscow’s growing weakness, but the prospect of Russia’s defeat in its unjust war with Ukraine and lopsided confrontation with the West is worrisome for every autocrat — including Erdogan.