The Russian invasion was followed by rapid increases in global food prices which reached record levels during March to May 2022.

On 22 July 2022 Russia and Ukraine separately signed parallel agreements brokered by the UN and Turkey which allow the export of food crops from Ukraine and fertilizer from Russia. The agreement allows for the ships to be escorted and cargoes monitored and was hailed as a major step toward mitigating the 2022 food crisis which has seen basic stables reach record prices around the world.

It was described by the UN Secretary General as a ‘beacon of hope’ that would help tackle the world food crisis.

Three weeks after the agreement was signed the level of shipments is still modest. The UN has set up a website which provides a regular update of the ships which have left Ukraine, and as of 16 August, there had been 16 shipments.

… the first 16 shipments were not destined for the most impoverished countries.

Previously, analysts had emphasized the loss of exports of wheat from Ukraine. However, only one of these carried a cargo of wheat, the remainder being of corn, sunflower products and soya beans. Perhaps more importantly, the first 16 shipments were not destined for the most impoverished countries.

Instead, half of the ships have been sailed to Turkey, and the rest sailed to China, Iran, Italy, South Korea and the United Kingdom. The UN has also chartered a ship, the Brave Commander, which is planned to carry the first humanitarian cargo to Ethiopia.

The first 15 ships had been trapped in Ukraine since the start of the war. A further 11 ships had been inspected and were inbound to ports in Ukraine during 7-15 August. These ships will only transport a modest proportion of the estimated 23 million tonnes of grain and seed crops stockpiled in Ukraine, a total which will grow after the summer and autumn harvests. Transporting 23 million tonnes would require about 370 shipments by medium sized vessels, or twice that number of smaller ships which could deliver grain directly to ports in sub-Saharan Africa.

At 22 July when the agreement was announced, Ukrainian officials warned that it would take months before grain exports by sea could reach their pre-war levels. Further attacks by Russia on the ports, storage facilities and transport infrastructure would further extend that delay.

The loss of wheat exports from Ukraine appears to have been offset at a global level by increased production by China, Canada, Russia and the United States.

World food prices have though been falling since the record peaks observed immediately after the Russian invasion of Ukraine. The UN FAO’s global index of cereal prices reached a peak in May 2022 and declined in June and July. Chicago grain futures were trading on 16 August at roughly the level they were immediately before the Russian invasion, and were largely steady in the weeks following the announcement of the Ukraine export agreement. The loss of wheat exports from Ukraine appears to have been offset at a global level by increased production by China, Canada, Russia and the United States.

Despite these increases, global grain prices in July 2022 are still about a third higher than they were in July 2020. The Russian invasion exacerbated a pre-existing shortfall between demand and supply, and many of those wider structural factors remain.

The drop in global prices has not been reflected in retail prices in some developing countries. The World Food Programme Price Database includes information on wheat flour prices in Bangladesh and Benin up to July 2022 (at the time of writing July 2022 data was not available for that commodity for other countries). In both prices had not begun to fall in line with global markets – this is likely to because flour sold in July had originally been purchased months previously as wheat from a producer.  Lower prices in Bangladesh are likely due to government grain subsidies. 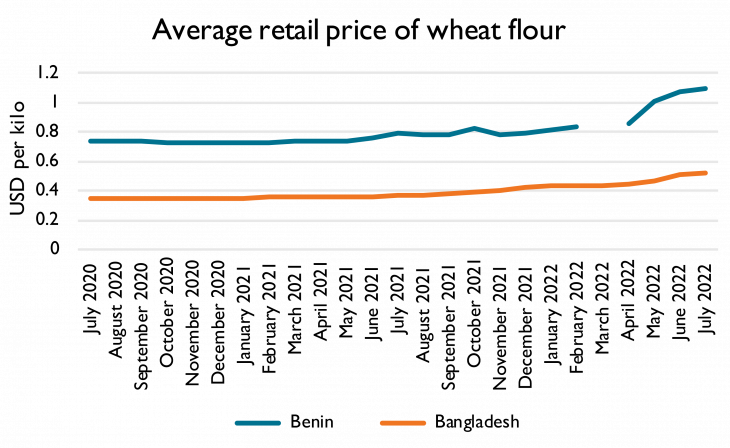 Note: data was not available for Benin in March 2022.
Source: statistics produced by the World Food Programme and compiled by the author.

To sum up, the decrease in global grain prices to pre-war levels has been achieved through improved production in areas outside Ukraine. The agreement to allow exports from Ukraine is yet to deliver food supplies to the areas most affected by hunger, and the total volumes delivered to date will have only had a modest effect upon Ukraine’s stocks and global supplies or prices.  The agreement may though have helped to calm markets.

Even before the February 2022 invasion, there was a shortfall between global supply and demand and prices were already high. A consequence of the Russian invasion of Ukraine is that the global shortfall in supply will remain despite increased production by several key suppliers. Global level price decreases have not yet led to cheaper flour in two developing countries.