Samarkand didn’t go well for President Vladimir Putin. The Shanghai Cooperation Organization (SCO) summit hosted by Uzbekistan in this ancient city gathered many leaders of various Eurasian states, from Belarus to Mongolia, but it was the meeting with China’s Chairman (the title that Putin addresses him with) Xi Jinping that was of crucial importance for the Russian leader. 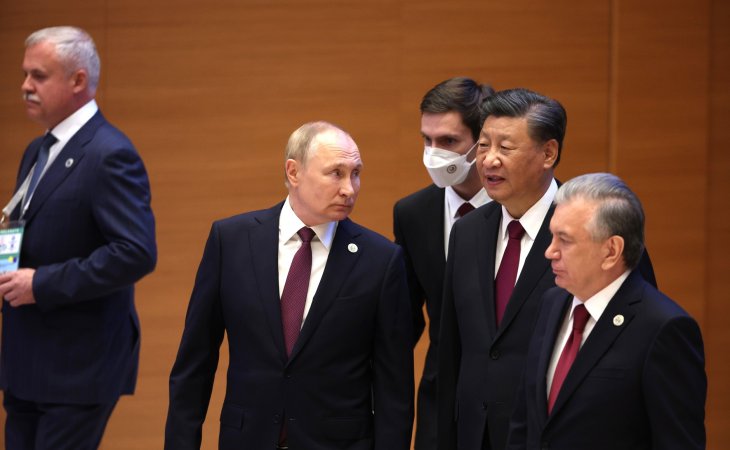 With President of the People’s Republic of China Xi Jinping before the expanded meeting of the SCO Council of Heads of State. Photo TASS / kremlin.ru

Just a week prior, Putin attended the economic forum in Vladivostok and was encouraged by the message from Li Zhanshu, the chairman of the National People’s Congress (Zhanshu is likely to be on his way out) after the XX Congress of Chinese Communist Party next month), who praised the strong dynamics of the China-Russia strategic partnership (Kremlin.ru, September 7). The meeting with Xi Jinping, for which Putin had to come to the hotel reserved for the Chinese delegation, was a visibly sterner affair (Izvestiya, September 15). The readout of opening statements tells that Xi Jinping was concise and noncommittal, while Putin felt obliged to acknowledge Chinese “questions and concerns” regarding the Ukraine crisis (Kremlin.ru, September 15).

What made a difference between these two events was a shocking defeat delivered to the Russian army by the Ukrainian offensive in the Kharkiv region.

… the Kremlin has good reasons to presume that the public opinion remains indifferently supportive to the war only so far as life in Moscow and St. Petersburg continues “as normal”…

The frontlines have stabilized anew, but the political resonance from the rout, which  the Russian Defense Ministry tried to explain away as a “regrouping”, amounts to the decisive turn in the course of the high-intensity war (Novayagazeta.eu, September 13). The weakness of motley Russian forces, comprised of depleted regular battalions, gangs of Wagner mercenaries and, companies of conscripts from the Donetsk and Luhansk regions, is crudely exposed, so Ukrainian command keeps probing vulnerable points for their next breakthrough (Nezavisimaya gazeta, September 15).

Russian “patriotic” bloggers claim that without a mass mobilization, the “special operation” is doomed to a humiliating defeat, but the Kremlin has good reasons to presume that the public opinion remains indifferently supportive to the war only so far as life in Moscow and St. Petersburg continues “as normal”, minus the subversive rock concerts and theater productions (Meduza.io, September 13).

At the press-conference in Samarkand, Putin made every pretense of controlling the execution of military operations and continuing the offensive push in the Donbass, but this denial of difficult reality on the battleground can reassure neither the perturbed Russian elites nor the displeased Chinese leadership (Svoboda.org, September 16).

Trade has increased, investments have stagnated

The self-congratulatory talk about expansion of economic ties cannot quite hide the fact that it is only trade that has increased, mostly because of price increases on commodities, while investments have stagnated, and hopes that China would deliver the Russian economy from the deepening recession are groundless (Russiancouncil.ru, September 13).

Narendra Modi found it opportune to inform Putin that “now is not an era of war”.

Western sanctions make it profitable for Chinese corporations to buy some additional volumes of Russian oil and LNG, but they are aware of the looming crisis in the Russian energy industry, so even mid-term plans have wide margins of uncertainty (The Insider, September 16). India makes similar assessments (and cannot expect any new supplies of Russian weapons), so Prime Minister Narendra Modi found it opportune to inform Putin that “now is not an era of war” (Kommersant, September 16).

Russia’s debilitation in the course of the war inevitably weakens its positions in Central Asia, and China is concerned about Moscow’s inability to perform the role of security provider in this conflict-rich region (Rosbalt, September 14).

Quite deliberately, Xi Jinping started his first overseas trip since the outbreak of the pandemic with a stop in Kazakhstan and reassured President Kassym-Jomart Tokayev of his full support to his program of political and economic reforms (Forbes.kz, September 15). Putin had conversations with each Central Asian leader (presumably more consequential than the SCO formal plenary session), but according to readouts, he didn’t mention Ukraine once (Kommersant, September 15).

The new wave of armed conflict in the South Caucasus

He also ignored the violent escalation of border clashes between Kyrgyzstan and Tajikistan, that has progressed with the use of heavy weapons even as both presidents pretended to maintain the atmosphere of good-neighborhood in Samarkand (RBC.ru, September 17). The new wave of armed conflict in the South Caucasus is formally outside the SCO area, but Azerbaijan’s President Ilhan Aliyev found full support for his new offensive from Turkish President Recep Tayyip Erdogan, while Putin left the desperate appeal for help from Armenian President Nikol Pashinyan (who found the danger to be too grave to travel to Uzbekistan) without response (Nezavisimaya gazeta, September 14).

The theme Putin was eager to elaborate upon was the tensions around Taiwan, and he duly condemned US “provocations” hoping to score a useful point with Xi Jinping (RFERL.org, September 15). An escalation of a China-US confrontation is indeed the best chance for Russia to see Western support for Ukraine downsized, so Moscow experts are eager to draw scenarios for naval-air battles in the Taiwan Strait (Valdai club, August 31).

China, however, measures very carefully the benefits of a boost of jingoist popular mobilization against the severe economic consequences of initiating a full-scale confrontation with the USA, illuminated sharply by the impact of Western sanctions on the Russian economy (NV.ua, September 16).

A partnership “without limits”

Xi Jinping probably regrets his commitment to a partnership “without limits” with Russia, if only because he has himself drawn some very firm limits for granting symbolic rather than material help to China’s partner-in-need. He doesn’t want to see Russia’s defeat and Putin’s inglorious exit, but neither does he fancy to ally with a loser and in doing so, anchoring China to a sinking ship.

Back in February, he missed the opportunity to dissuade Putin from launching the disastrous invasion, being too busy with the Olympic celebrations. Presently he is again extra-busy with the preparations for the XX Congress of his tightly-disciplined Communist party, but there is one important opportunity he shouldn’t miss.

In that political initiative, he unexpectedly finds himself on the same page with US President Joe Biden: the two world leaders need to act together for deterring the desperate Russian autocrat from resorting to his means of last resort: the nuclear arsenal. The word “don’t” is already spelled out in Washington D.C.; hopefully, the “don’t even think about it” message will come from Beijing as well.