On February 24, the world witnessed the full-fledged invasion of Ukraine led by the Russian President Vladimir Putin and his forces. Described as one of the most aggressive military acts seen in Europe since World War II, the military invasion of Ukraine has had far more geopolitical consequences than expected. Though it is too early to know how this war will end, it is clear that we are now at a significant crossroads in international politics. 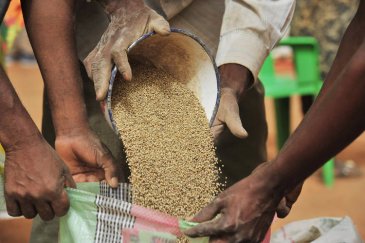 As the war continues in Europe, many political leaders in Africa are wondering what the long-term geopolitical implications of this crisis will be on Africa, both in terms of the region’s future security and future political development.

Africa, similar to many parts of the world, has yet to fully recover from the socio-economic decline triggered by the COVID-19 pandemic and other global economic crises.

Many intellectuals, political analysts, and diplomats have already written about the Russo-Ukrainian War and its consequences on the international stage. This blog post, therefore, does not aim to reproduce what has already been highlighted about the global implications of this crisis. Instead, we analyse the short- and long-term impact of the war on Africa’s geopolitics. This war has exposed the weaknesses of several political and economic structures in Africa, and the most severe direct impacts of the conflict are on the region’s food and fuel insecurity and internal conflict patterns.

From 2007 to 2019, the African region’s wheat imports grew by 68 per cent, thereby increasing to 47 million tonnes. In fact, the region accounted for 80 per cent of all wheat imports, and forecasts say that “wheat consumption in Africa is projected to reach 76.5 million tonnes by 2025, of which 48.3 million tonnes or 63.4 percent is projected to be imported outside of the Continent.” Meanwhile, sanctions imposed on Russia by Western states have not only led to a shortage of fertilizer, which has had a direct impact on the global food security through reduced agricultural production and outputs, thereby increasing  food prices, but have also negatively affected the export of Russian fertilizers to other global markets, including African.

As Africa heavily relies on import of food crop and oil from the warring parties, the Russo-Ukrainian War has resulted in extreme price shocks and a disruption of the supply chains of various commodities across Africa, ranging from wheat and sunflower oil to crude oil. Closure of ports such as in the Black Sea, where most of the trade between Russia and Africa takes place, has been heavily felt by African countries, which have seen an unprecedented surge in prices of food crops and fuel.

Furthermore, Russia is not only the second leading military power, but also the world’s third highest exporter of crude oil after the United States and Saudi Arabia. The news agency Al Jazeera English claims that “in 2019, 48 countries bought Russian crude oil worth $123bn”. As a country with great political, economic and military leverage, it is not surprising that their invasion of Ukraine has had implications on Africa’s fuel security. The disruption of oil prices has further exacerbated the cost of food production in Africa, with conflict-affected regions, such as the Sahel, being the most affected.

The Sahel region and conflict trends

… food insecurity will most likely increase the risk of long-lasting conflict in the Sahel.

As if issues like environmental degradation, climate change, migration, ongoing conflict and threats of insurgency were not enough, food insecurity will most likely increase the risk of long-lasting conflict in the Sahel.

The combination of environmental factors such as drought, extreme weather events and the Russo-Ukrainian War, affecting both the production and supply of food, will contribute to widespread malnutrition and famine in the region.

Research from PRIO scholars Marsh and Rudolfsen shows that “increasing food insecurity, especially in the form of increasing food prices, is found to increase the likelihood of protests and armed conflict”. They argue that one of the two groups of countries that are most likely to be vulnerable to the current food insecurity, is least developed countries (LDCs) that are highly dependent on food aid. Most of these countries are to be found in Africa. The Sahelian countries, especially fragile states such as Mali, Niger, Burkina Faso, Mauritania, and part of Northern Nigeria, are particularly vulnerable to these external shocks.

As a consequence, we are more likely to observe a rise in violent conflict across this already complex region. With no rigid regional security frameworks in sight that are capable of resolving these existing and potential security threats, spillover effects of conflicts and insecurities in the whole of Africa are likely.

Is there still any hope?

Despite its multiple challenges, this geopolitical crisis can be viewed as a window of opportunity for African countries to reduce their reliance on food imports from external actors, and instead build a resilient food system that can meet the needs of the growing population in the coming years.

African countries have infinite access to natural resources, including arable land for agricultural purposes. By successfully harnessing the potential economic opportunities that come with growing food for domestic consumption and export the remaining, African countries could strengthen their position on the international stage. However, whether this vision can be translated into a practical reality or not, remains to be seen.