Fast-moving developments in various tactical battlefields of Russia’s war against Ukraine have notably slowed during the past week, and Moscow is actively seeking to prolong this procrastination. 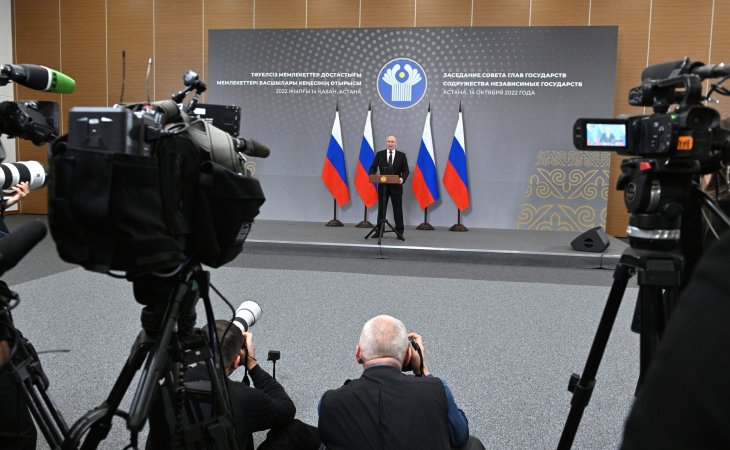 None of Putin’s counterparts supported Russia in the debates at the UN General Assembly last week, but most — with the notable exception of Turkey — opted to abstain from voting on the resolution condemning the annexation of the four Ukrainian regions (Meduza, October 14). Russian diplomats tried to explain away the fiasco of 143 states supporting this resolution (two more than supported the March 2 resolution condemning Russian aggression) as purely the result of the United States and its allies “twisting arms” behind the scenes (Izvestiya, October 13). The Russian leader, however, had a myriad of other reasons for softening his discourse.

A major concern for Putin is avoiding any untimely irritation of his key strategic partner, Xi Jinping

A major concern for Putin is avoiding any untimely irritation of his key strategic partner, Xi Jinping, who is busy asserting his dominance at the 20th National Congress of the Chinese Communist Party, which began on October 16. The Russian president knows that his “dear friend” disapproves of the decision to start the war against Ukraine and prefers a termination of hostilities as soon as possible, thus a demonstration of restraint should be perceived by Beijing as appropriate behavior for the moment (Globalaffairs.ru, October 13).

Putin has, therefore, refrained from any mention of nuclear options, in contrast to the alarming brinksmanship displayed in previous weeks (Russiancouncil.ru, October 6). Mainstream Russian media has reported only briefly on the North Atlantic Treaty Organization’s Steadfast Noon Exercise demonstrating nuclear deterrence capabilities in northwestern Europe. The maneuvers are due to continue until the end of October 2022 (Kommersant, October 14).

Change in tone on energy

Even more striking is the change in Putin’s tone regarding energy matters, as the barely disguised blackmail has transformed into seemingly sincere offers to resume gas exports to Europe, where prices have started to decline (The Moscow Times, October 14).

The explosions on the Nord Stream pipelines (which coincided with an explosion on the Kerch Bridge in Crimea) have alarmed Germany, Denmark, Sweden and particularly Norway — a major supplier to the European market — but Putin’s “goodwill” has found no takers (Svoboda, October 12). The Russian leader has also advanced a proposition for expanding Russian export routes to Europe via Turkey, but even President Recep Tayyip Erdogan, who, for many years, has cherished the dream of positioning Turkey as a major gas hub, remains lukewarm to Putin’s overtures (RBC, October 14). Erdogan knows all too well that Gazprom is in such dire financial and technological straits that a project for laying another undersea pipeline would be entirely beyond its current means (Kommersant, October 13).

Putin is courting Erdogan not only with the aim of expanding Turkish channels for circumventing the West’s sanctions regime but also with the hope of eroding and splitting the unity of the Western alliance (Currenttime.tv, October 14). Massive Russian missile strikes on Ukrainian cities on October 10 prompted NATO to commit to a new increase in military support for Kyiv, including multilayer air defense capabilities, and Moscow needs to dilute this commitment (Nezavisimaya gazeta, October 12).

Russian air defenses are clearly unable to protect crucial military infrastructure around Belgorod, while Sevastopol experienced multiple false alarms and surface-to-air missile explosions in empty skies (Meduza; Svoboda, October 15). Alternating between tough and soft rhetoric, the Kremlin is trying to diminish any sense of urgency among the NATO allies regarding military aid to Ukraine and thus reduce the gaps in capabilities emerging as a result of progressive de-modernization of the Russian army.

The implementation of Putin’s mobilization order has accelerated this process of converting heavily armored and mobile battalion tactical groups into companies of shabby infantrymen, as shortages in military hardware mean the army cannot provide even uniforms, let alone usable weapons (The Insider, October 11). The industrial base is quite incapable of boosting arms production as many sanctions-affected supply chains have been damaged beyond repair.

The morale among the new conscripts keeps plummeting

Additionally, many businesses are in shambles due to the sudden emigration of key management and the information technology cadre (Forbes.ru, October 12). The morale among the new conscripts keeps plummeting as stories about intolerable conditions in training centers and instant casualties circulate among social networks.

Meanwhile, officials try to present such outcomes as the results of brutal hazing, including characterizing the fratricide at a shooting range in Belgorod region as a “terrorist attack” (Novayagazeta.eu, October 15). Putin has tried to calm down the panic by announcing that there will be no more waves of mobilization, but the crude actions of press gangs in Moscow and St. Petersburg are far more impactful than his assurances (Meduza, October 14).

Perhaps the most striking aspect in Putin’s barely coherent justification for the mobilization was not the acknowledgement of chaos in conscripting new recruits but the promise that “first-class specialists” from the Russian Security Council would investigate the distortions (Kommersant, October 14). In fact, not a single person on Putin’s Security Council has any experience in military matters, except for Defense Minister Sergei Shoigu, who has increasingly become the target of war-mongering “patriotic” bloggers for his incompetent strategic planning (Svobodnaya pressa, October 16).

Irked by this criticism, the top brass has tried to tighten censorship of the unruly community of “war correspondents,” and one notorious firebrand, Igor Girkin (going under the more warrior-like name “Strelkov”), has opted to join a combat unit in Donbas (Moskovsky komsomolets, October 15). The cruel triumphalism among the “war party” aroused by Russia’s “big-bang” missile strikes has subsided, as the arsenal of missiles is nearly empty, and has given way to newfound alarmism as Ukrainian forces increase pressure on the Russian grouping around Kherson (Vazhnye istorii, October 15).

Putin’s pretenses at moderation and even at negotiating an end to hostilities can last only as long as the kinetic war remains relatively static. This approach will inevitably be dropped as the Kherson defenses break down. And it will be impossible to explain away this looming disaster as yet another “regrouping” because many of the trapped troops will most likely capitulate or desert, and the blame for this loss of recently annexed territory cannot be pushed on General Sergey Surovikin, the newly-appointed commander of the “special military operation.” No “party of peace” exists in the Kremlin, but many nervous courtiers are beginning to see profit in ganging together in a “postwar party,” which clearly means “post-Putin.”