The United States recently announced a new set of restrictions on the export of advanced semiconductors, chip-making equipment, and supercomputer components to China.

The interim final rule further escalates the geopolitical dispute between the US and China and raises concerns about the increasing fragmentation of the digital domain. 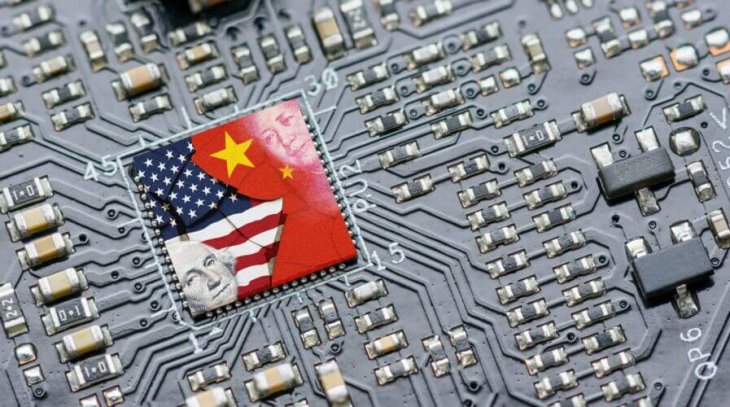 On October 7th, 2022, the Commerce Department’s Bureau of Industry and Security (BIS) released the interim final rule enforcing additional controls on the export of key advanced technologies to China with the aim to prevent military applications. The BIS framed the rule as a national security measure. The section on “supplementary information “amended the Export Administration Regulations (EAR) ”… to address U.S. national security and foreign policy concerns” (interim final rule, p. 3).

Notwithstanding such framing, the rule is expected to have major economic consequences on China’s technological sector, as it targets three key industry areas: semiconductors, chip-making equipment, and supercomputer components.

While these measures are expected to compromise China’s domestic chip industry, their implementation will also affect the global semiconductor supply chain, due to its strong reliance on global trade and international cooperation. To mitigate the short-term impact of the newly introduced controls, the BIS structured a four-stage implementation plan spanning from October 2022 to April 2023.

… both countries aim to reduce their technological reliance on its rival …

The adoption of the rule follows the signing of the CHIPS and Science Act on August 9th, 2022, which provided roughly 280 billion dollars to be invested in the domestic production of semiconductors. The Biden administration is embracing the acceleration of the process of “technological decoupling.” The term refers to the broad set of export control initiatives and protectionist measures implemented by the US and China as part of their economic and political competition, as both countries aim to reduce their technological reliance on its rival to safeguard economic and security interests.

In the US, the emergence of a “new American techno-nationalism focused principally on China” (Bateman, 2021) did not happen overnight. Already in 2012, the House of Representatives issued a committee report on Huawei and ZTE, which later became a milestone for future scrutiny of Chinese tech companies.

The decoupling process intensified under the Trump administration, which strongly promoted the adoption of defensive measures to preserve the US’ technological edge over China. The Biden administration did not reverse this trend. As Bateman reported, the number of unique Chinese companies featured in the Entity List quadrupled between 2018 and 2022, going from 130 to 523.

Russia is defined as an immediate threat […] China is presented as “America’s most consequential geopolitical challenge.”

A few days after the rule was released, the White House issued President Biden’s first formal national security strategy (NSS). The document further clarified Biden’s position on China, as it argues that “We are in the midst of a strategic competition to shape the future of the international order,”.

Although the NSS identifies Russia and China as the main challengers to the US-led international order (not surprisingly), it describes the two countries in different ways. While Russia is defined as an immediate threat to the free and open international system amid its ongoing invasion of Ukraine, China is presented as “America’s most consequential geopolitical challenge.”

The shift towards a policy of coexistence with China resonates in the emphasis posed on the rebuilding of global partnerships to safeguard the liberal international order from increasing Chinese challenges. With the decision to implement further restrictive measures on China’s tech, the US proposes to lead the way for like-minded states to counter China’s rise.

The US’ unilateral decision to escalate the process of technological decoupling does not come without concerns.

Firstly, the measure further deteriorates the overall bilateral relations between the US and China. China’s Foreign Ministry spokesperson Mao Ning stated that the new US export controls are an abuse of trade measures and designed to maintain the country’s “technological hegemony”. If possible, the interim final rule further restricts any window for future cooperation between the two countries and risks fuelling a vicious circle of protectionist measures.

Secondly, the decision to flex muscles endangers America’s soft power. As President Xi Jinping enters his third term and consolidates unprecedented control over the party-state, the interim final rule further aliments China’s anti-imperialist rhetoric towards the US. The decision to hinder China’s technological development not only reinforces the Communist Party’s domestic rhetorical strength, but also appeals states in the Global South, especially those with increasing economic and political relations with Beijing.

Thirdly, America’s decision to intensify the technological dispute with China raises questions about the reaction of its own allies as well as private actors. Since taking office, the Biden administration has attached significant importance to re-building multilateral agreements between like-minded states and the cooperation between the private and public sector to counter China’s increasing international influence.

While the US effectively promoted key initiatives in the technological domain, such as for instance the “Chip 4” alliance with South Korea, Taiwan, and Japan, the interim final rule did not result from consultations neither with allied countries nor with private actors, eliminating any room to align any diverging political and economic interests (Foreign Policy, October 12). If anything, the implementation of the interim final rule clarifies that the primary objective of the Biden administration is containing China’s technological rise, disregarding the economic or political price.

… the export of Chinese technologies raises fundamental concerns about the adoption of China’s digital authoritarianism … in recipient countries.

China’s increasing influence in the technological domain must certainly not be overlooked. The Communist Party has been extensively utilizing digital technologies to further enhance its control over its population, resulting in widely reported human, civil and political rights violations, especially targeting ethnic and religious minorities. As China increases its geopolitical reach, not least through the promotion of the Digital Silk Road, the export of Chinese technologies raises fundamental concerns about the adoption of China’s digital authoritarianism model of governance in recipient countries.

Considering China’s increasing investments to foster its domestic semiconductors industry, the decision to isolate China and preserve a comparative advantage in a key technological component is reasonable.

However, the unilateral implementation of restrictive measures could be a double-edged sword, as it might effectively push states in the Global South to align with China and potentially increase the digital divide. Furthermore, due to the high reliance of the semiconductor industry on global trade and cooperation, the rule is expected to have major consequences on private actors across the global supply chain.

To effectively counter China’s rise and protect the international liberal order, future measures should result from multilateral initiatives with America’s allies as well as the private sector.