Bold and unpredictable maneuvers are supposed to be the trademark political style of Russian President Vladimir Putin; last week, however, he surprised observers of various persuasions not with a proactive move but with an unusual act of avoidance. 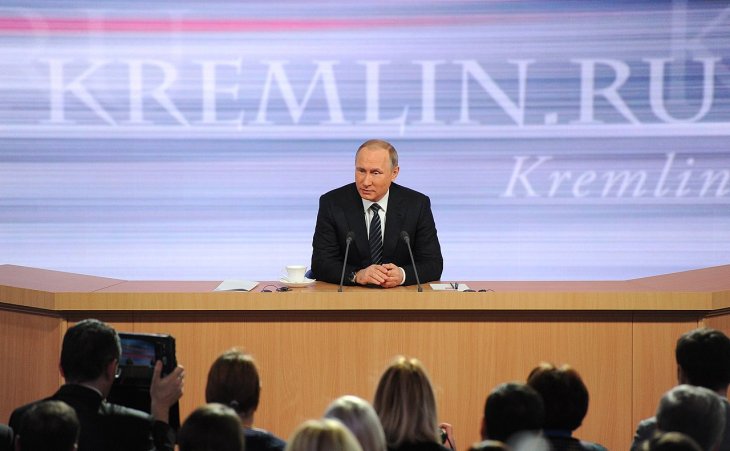 Putin at one of his annual press conferences. This year, this is canceled. Photo: kremlin.ru

Putin’s annual marathon end-of-the-year press conference has been canceled, as has the traditional “direct line” with carefully trained audiences, and his constitutionally prescribed annual address to the Federal Assembly has been postponed indefinitely (RTVi.com, December 15).

Speculation about Putin’s allegedly deteriorating health, always a dime a dozen, are rather subdued as the Russian president has been visibly active in multiple meetings with various loyal subjects, sometimes even face-to-face, as well as recently traveling to Kyrgyzstan.

More convincing appears to be the subversive proposition discussed by many watchers-in-exile that Putin does not want to hear even slightly uncomfortable questions and cannot find a positive or reassuring theme for his typically pompous address (Svoboda, December 15).

Seeking to disprove doubts in his performance, Putin held a long (but virtual) meeting of the Council for Strategic Developments and National Projects, going into much detail on the economic situation, scolding Europe for its sanctions regime (Kommersant, December 15). This demonstration of greater attention to social issues cannot hide the sustained lack of interest on economic policy, however, which is largely delegated to technocrats in the Russian government who may have reservations with the war but are working diligently to minimize its consequences (Novayagazeta.eu, December 16). Putin much prefers to deal with wider foreign policy matters, but, recently, his every attempt to advance a meaningful initiative has either fallen flat or backfired, which may partly explain his reluctance to report on “successes” (The Moscow Times, December 15).

Energy exports are Putin’s instrument of choice in his foreign policymaking, and he has promised a firm response to the European Union’s and G7’s enforcement of a price cap on Russian oil exported by sea (RBC, December 12). Nevertheless, this response has yet to be formulated, meaning that India, and others, can demand deep discounts on new purchases from the Russian Baltic terminals.

Meanwhile, the price for the Urals crude blend has slipped to between $50 and $55 per barrel, below the price cap and some $30 lower than the current level of Brent crude (Kommersant, December 14). Putin has also invested efforts to chart new routes for gas exports and proposed to Kazakhstan and Uzbekistan the establishment of a “gas union,” only to have this proposal politely downplayed by Astana and flat-out rejected by Tashkent (Forbes.ru, December 13).

Another one of Putin’s initiatives has been expanding on the idea of building a “gas hub” in Turkey, which he elaborated on in a phone conversation with President Recep Tayyip Erdogan on December 11, hoping to persuade Erdogan to show restraint in the Caucasus (Kremlin.ru, December 11). Erdogan is keen on the idea but interprets it much more widely, renewing his push for a trans-Caspian gas pipeline (which Moscow has always tried to block) during a recent visit to Turkmenistan (Oilcapital.ru, December 15). Russia’s influence in the Caucasus, meanwhile, continues to shrink as Azerbaijan increases its pressure on the rump Karabakh enclave controlled by Armenia, disregarding Putin’s feeble mediation (Nezavisimaya gazeta, December 14).

These setbacks are underpinned and sometimes even directly caused by the unfolding failure of Russia’s invasion of Ukraine, and Putin cannot fail to see that his narrative on the “special military operation” going according to plan satisfies neither a society perturbed by the poorly organized mobilization nor the noisy gang of “patriotic” war bloggers demanding a decisive victory (Topwar.ru, December 12).

Seeking to demonstrate his involvement in planning the war, on December 16, Putin visited the headquarters of the Russian troops involved in the operation against Ukraine and then dispatched Defense Minister Sergei Shoigu to the frontlines, where Putin himself has never been (Izvestiya, December 18; Kremlin.ru, December 17). The Russian president may see the fruitless and costly tactical offensive on Bakhmut as a potential for recapturing the strategic initiative by Russian forces, but the newly mobilized troops are suffering badly in frozen trenches with deplorable supplies (The Insider, December 15). Speculation about a possible new Russian offensive toward Kyiv will gain renewed attention with Putin’s visit to Minsk on December 19, but the shortage of tanks lost in enormous numbers in the past 10 months of fighting leaves the demoralized army only capable of holding its defensive lines — and the Belarusian army has little offensive capacity (Current Time, December 16).

Putin must be worried that a pre-planned pompous ceremony may be spoiled by an unexpected Ukrainian strike, much the same way as his road trip to the restored Kerch Bridge on December 5 was overshadowed by the shocking Ukrainian strike on two Russian air bases deep within Russian territory. The only response that the Russian command has mustered to such feats of Ukrainian arms has been the ongoing missile attacks on energy infrastructure, but this brutality has only further convinced the United States and its European allies of the need to supply Ukraine with MIM-104 Patriot surface-to-air missiles, ignoring Moscow’s loud objections (Svoboda, December 15).

The Ukrainian command has taken particular care in executing long-distance strikes — from the sinking of the Moskva cruiser to the hit on the strategic Engels-2 airbase — using only domestically produced weapons systems for such strikes. Now, Western allies have discontinued attempts to discourage Kyiv from hitting targets not only in Crimea but also inside Russian territory (Izvestiya, December 16). Russian military experts are predicting that new high-precision long-range weapon systems — such as the MQ-1C Grey Eagle drone, Storm Shadow cruise missile or TRLG-230 Multiple Launch Rocket System, to be supplied, respectively, by the US, the United Kingdom and Turkey — could drastically change the character of the war in Ukraine’s favor (Gazeta.ru, December 17; Nezavisimaya gazeta, December 11).

The post-Kherson pause in combat operations suits Putin just fine, but he cannot hope that it will last and cannot know what surprises the Ukrainian command will unleash next and when. Over 10 months in the war of his choice, the capacity of the Russian war machine has deteriorated severely, and the quality of leadership demonstrated by the Russian high command has not improved at all due to its patent inability to learn from mistakes. Putin’s war plans amount to a hope that the repetitive missile strikes will destroy Ukraine’s will to resist and the capture of Bakhmut, at whatever cost, will lead to further territorial gains. Such hope is as false as his original ambition to capture Kyiv in a week-long blitzkrieg was, and it is his last one. Ultimately, the corrupt elites have no way of knowing for how long the Russian president can feed his false narratives to an increasingly demoralized and frustrated populace.