The war in Ukraine has changed the atmosphere and the dynamics within the UN Security Council. 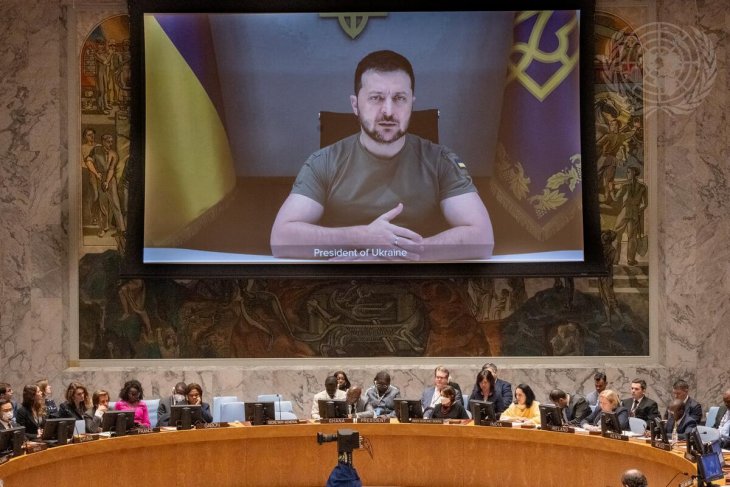 The five permanent members and veto powers of the Council distrust each other, and diplomats fear that the war will have long-lasting negative effects on other matters.

How did Norway and the other elected members of the Security Council work under these circumstances in 2022? Is it rational for states like Norway to allocate time and resources to serving on the Council when great power politics seem to dominate its agenda?

“The strong do what they can and the weak suffer what they must,” wrote Thucydides, the Ancient Greek historian.

Superficially, this seems like a fitting description of the UN Security Council. The five permanent members and veto powers have the final word when matters come to a vote. They also have the power to keep matters off the agenda, and they have resources that are unavailable to most elected members.

Even so, there are ways in which non-permanent – elected – members can exert influence. In a recent study, we have explored how.

On 31 December 2022, Norway’s term as an elected member of the UN Security Council came to an end. When Norway’s campaign to be elected to a seat on the Security Council was launched, it provoked some public debate at home: was such a use of resources – money, personnel, time and diplomatic attention – justifiable?

With some vocal exceptions, the answer was “yes” – from the government, parliamentarians and officials in the Ministry of Foreign Affairs. Norway would have an opportunity to make a difference in its key foreign policy areas and to strengthen its networks, build internal competence and boost its international reputation. As a supporter of the UN and an advocate of a rules-based international order, for many it went without saying that Norway would “do its part”.

Votes from the past

Still, it is only natural that the question about the usefulness of a term on the Council is asked. The Security Council can seem static and outdated. Its critics often cite its lack of decisiveness in the face of major crises such as the coronavirus pandemic, the wars in Syria, Ethiopia, Myanmar, Yemen and Ukraine, and the unstable security situation in the Sahel.

… the Security Council reflects the international balance of power in 1945.

With the United States, China, Russia, the United Kingdom and France as permanent veto-holding members, the Security Council reflects the international balance of power in 1945.

Accordingly, the room for maneuvre is unavoidably affected by the great powers’ interests. The five states also have other advantages. They have a long period of continuous experience from serving on the Council, enduring access to information, and the opportunity to identify and pursue long-term objectives. So why should other states bother to seek a seat on the Council – if in the end the veto powers always have the last word?

Ignoring for a moment the veto right and the Council’s formal procedures, diplomats representing elected members of the Council stress that there are indeed ways in which elected members can influence the Security Council’s agenda and its processes and outcomes. One example is the role of penholder for particular files or resolutions. For example, Norway shared penholder responsibility for the Afghanistan file with Estonia in 2021, while in 2022 it worked as co-penholder with Ghana to draft a resolution on piracy in the Gulf of Guinea.

Another path to influence is through the rotating presidency. The president chairs Council meetings and can use the agenda-setting process and signature events to put the focus on its own country’s priorities. During its presidency, for example, Norway opted to emphasize peace diplomacy, the protection of civilians in urban warfare and women, peace and security.

Coalition-building is important for all members of the Security Council, but is perhaps particularly important for the elected members. Some coalitions are formed on the basis of geographical factors, shared interests or a perception of “like-mindedness”. Others are based on dialogues between member countries with different viewpoints. Norway has been concerned with promoting greater cooperation between the elected members, for example.

At all times, the Security Council includes three elected members from Africa – often known as the A3. In 2022, these were Gabon, Ghana and Kenya.

The A3 have their own priorities, but the African countries also share a long-term, regional approach. In recent years, they have often presented joint positions that have been negotiated within the African Union (AU). They have raised security issues that are shared across the African continent and they want regional organizations – such as the AU and the Economic Community of West African States (ECOWAS) – to take more responsibility for peace and stability regionally in Africa, but with back-up from the UN.

An agenda set by crises

The work of the Security Council is shaped by unforeseen events and crises. During Norway’s previous term as a member – in 2001/2002 – the 9/11 terrorist attacks on the United States overshadowed most of its work. This time, Norway’s term as a member has been affected by unforeseen events such as the pandemic, the Taliban’s return to power in Afghanistan, and Russia’s attack on Ukraine.

Russia has blocked all attempts to pass a Security Council resolution condemning the attack on Ukraine. Other members have worked to find alternatives.

In March, the Security Council decided, in a procedural vote, that the issue should be referred to the UN General Assembly, where all UN member states are represented.

This was an important move, as the veto right does not apply in procedural votes. In the Assembly, the proposal went through.

All 193 member states had to take a stance and also make public their views on the Russian invasion. In the end, 141 countries voted to condemn the invasion.

Since Russia’s invasion, the Security Council has held frequent – even weekly – meetings about Ukraine. This frequency helps to maintain pressure on Russia, shed light on developments in the war, and document its course.

At the same time, many countries – including Western states – have warned against allowing the Council’s meetings about Ukraine to develop too far into routine presentations of deadlocked positions, where little new is added each time, while at the same time tying up significant diplomatic resources.

Although the war in Ukraine is dominating the international debate, conflicts and unstable situations in other parts of the world – and particularly in Africa – continue to comprise the majority of items on the Council’s agenda.

Although the veto-holding powers continue to dominate the Security Council, elected members can exert influence through the presidency, signature events, expert groups, procedural votes, the penholder system, informal processes, coalition-building, and collaboration with the General Assembly. When the scope for formal action narrows, the informal coalition-building and coordination processes that take place between Council meetings become more important and may provide more leeway to the elected members.

So far, the war in Ukraine seems to have had more impact on the climate of cooperation between delegates and the terms in which they express themselves, than on the Council’s actual collaboration, ability to adopt resolutions, and levels of activity. And while the atmosphere between the P5 have deteriorated with the war in Ukraine, it has arguably given more leeway to the E10s that know how to play their cards. The Council passed approximately as many resolutions in 2022 as in 2021.