France’s announcement to withdraw its forces from the Sahel in November 2022, alongside growing dissatisfaction with the nation’s presence in the region, opens the door for other actors to exercise greater influence in the Sahel and West Africa. 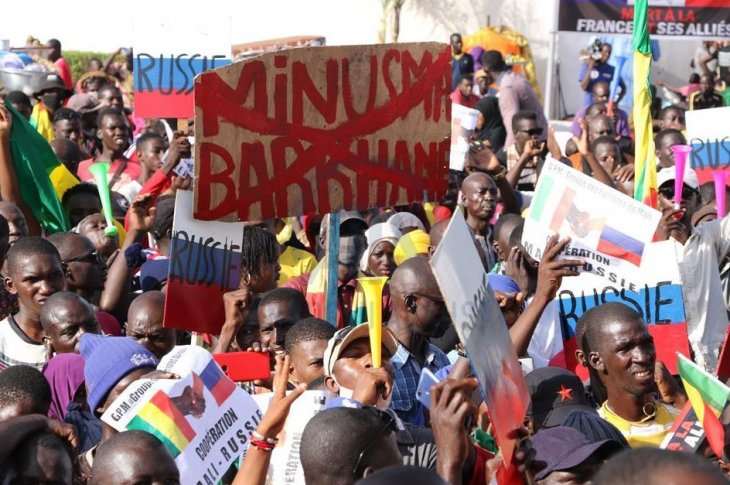 As the security situation in the Sahel deteriorated dramatically over the past decade, the international response has predominantly been led by Western actors, especially France and the European Union (EU).

However, France’s announcement that it would withdraw its counterterror operation Barkhane from the region, which had been a key security partner to Sahelian militaries over the past eight years, will likely have repercussions for other stabilization efforts, such as the EU training and capacity-building missions, and the United Nations peacekeeping mission in Mali.

There are expectations, both in the Sahel and abroad, that non-Western actors such as Russia and China will fill this void. These new dynamics have in turn raised concerns that we will see a decline in respect for democratic values and human rights protection in the Sahel.

Rising powers and their presence in the Sahel

While Western actors have dominated security involvement in the Sahel region for over a decade, other countries such as China, Russia, Turkey and the Gulf states have maintained warm relations with Sahelian states through trade, aid, financial support, infrastructure building and cultural exchange.

China’s engagement has mostly been motivated by economic interests, in particular sourcing natural resources and minerals. But China’s need to protect its interests has also prompted its involvement in security affairs, mainly through military exchange programmes and training, contributions to UN missions, donations to the G5 Sahel Joint Force, and arms sales. In addition, Chinese oil investments in Chad over the past two decades have made the Chadian army one of the most well-equipped forces in Africa.

Russia’s relationship with Sahelian states has been dominated by sales of military equipment and training of Sahelian soldiers in Russia. The private security firm, Wagner Group, has been involved in providing security services to Malian leaders, including by engaging in counterterrorism operations. Russia has also promoted several disinformation campaigns that capitalized on anti-French sentiment.

Other countries including Turkey, the United Arab Emirates and Saudi Arabia, have also attempted to extend their influence in the Sahel, notably through cultural diplomacy and by emphasizing Islam and religious education.

A geopolitical shift in the Sahel

As a result of the engagement of these powers, a geopolitical shift is now taking place, particularly in Mali. The worsening relations between Malian and French officials since 2021 – following France’s announcement to reconfigure Barkhane, and Mali’s subsequent relations with the Wagner Group – led to the deployment of the security group in Mali, and French withdrawal from Mali in the first half of 2022.

Since the Wagner’s deployment in early 2022, several trends have surfaced: Mali has distanced itself from France; The UN and EU missions have seen their physical and political maneuvering room shrink; civilians have faced increasing attack from state forces; and the Malian military interim government has continued non-democratic practices.

Speculation points to Burkina Faso possibly also having entered an agreement with the Wagner Group. Even though other Sahelian states, like Niger and Chad, have experienced popular protests voicing pro-Russia and anti-French sentiments, neither nation have yet turned from France, though it remains to be seen whether the announcement of French withdrawal will change this.

Despite being involved in a range of activities across the whole Sahel, the extent to which non-Western powers will extend their influence in the region is yet to be seen. With Russia fighting a long war in Ukraine, its resources to militarily and financially engage elsewhere are limited.

Should other Sahelian states than Mali also wish to deploy the Wagner Group or engage with the Russian military, it might not be feasible for Russia to prioritize such engagement, depending on how the conflict in Ukraine develops. China has largely focused on development and economic issues, and at present there is no indication that Beijing wishes to further its involvement in the security theatre more than it already does.

So while the security space in the Sahel may be opening up to other actors, Russia and China may not want or be able to fill this space. If anything, it may be more likely that other non-Western states, such as Turkey and the Gulf states, will advance their interests in the region.

Either way, it is likely that undemocratic regimes in the Sahel will continue to seek support and aid from non-Western powers as this typically comes with less conditions attached. As a consequence, such engagement with illiberal states will encourage the continuation of existing undemocratic tendencies.