The new year of cheerful celebrations and renewed hopes has failed to arrive in Russia, which is sinking deeper into the vortex of President Vladimir Putin’s devastating war against Ukraine. 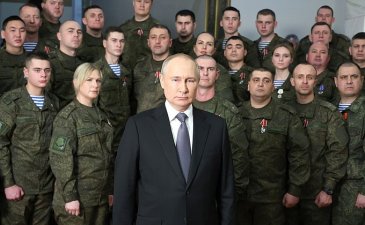 However, his best wishes did not produce any joy among the populace, which remains disconcerted with lost prosperity and worried about a new wave of mobilization (Nezavisimaya gazeta, December 24).

The first wave of mobilization, which was announced in September 2022 after many reassurances from the Kremlin that such dragooning would be unnecessary, was a big shock for society as many Russians had preferred to pretend that the “special military operation” launched on February 24, 2022 — again after many assertions that it would not happen — had no relevance for their everyday lives.

The contrast between Putin’s readiness to embrace the prospect of a protracted conflict and the growing fatigue in Russian society regarding the pains and hardships caused by the war, the purpose of which remains incomprehensible, is steadily sharpening (Carnegie Politika, December 19).

The plan for rebuilding the badly depleted capabilities of the Russian Armed Forces, proposed by Defense Minister Sergei Shoigu, is indeed necessary for waging such a war, but even the patriotic military commentators have expressed doubts regarding its feasibility (Topwar.ru, December 28). Putin may fancy himself a supreme commander of the obedient elites and disciplined masses, but growing discontent among the latter translates into a souring mood among the former (Re: Russia, December 26). Russian opinion polls tend to err toward loyalty when every anti-war statement is treated as a crime, but they, nevertheless, show a clear preference for peace talks rather than more fighting; for those between the ages of 18 and 24, two-thirds of respondents hope to see an end to the war (Levada.ru. December 23).

Older generations may be more inclined to stay loyal to the official course, but they are the most vulnerable when it comes to curtailing state-provided social benefits …

Older generations may be more inclined to stay loyal to the official course, but they are the most vulnerable when it comes to curtailing state-provided social benefits, particularly healthcare, which was hit hard by the COVID-19 pandemic and remains severely underfunded (The Insider, December 29).

The full economic cost of Moscow’s war against Ukraine is difficult to estimate, not least because of the reduced official release of basic statistical data. In addition, the government is concerned more about presenting the picture of a resilient economy than about addressing the severe distortions in critical supply chains (Riddle, December 21; Kommersant, December 30). Fiscal manipulations help in suppressing inflation, but the general scale of economic decline and degradation remains camouflaged — and it is assuredly set to deepen (The Insider, December 25).

Cuts in oil and natural gas production, as determined by the progressively tightened Western sanctions regime, will multiply the effect of export prices curtailed by sanctions and cause such heavy damage to the state budget that government officials prefer to operate with fanciful calculations, which are curated to match the Kremlin’s wishes (Novayagazeta.eu, December 29). Putin’s long-promised decree in response to the price ceiling levied on Russian oil exported by sea has impressed neither importers nor the world market, and it may backfire by further aggravating the consequences of sanctions for Russian producers (RBC, December 27).

In Putin’s view, his massive application of military force has demolished the old, unfair and United States–dominated world order. Yet, in truth, his actions have only resulted in Russia’s drastically diminished role in global governance (Russiancouncil.ru, December 29).

Moscow’s main hopes rest on the weakening of complex economic ties between the US and China as well as on the rise of tensions between them, which would cast Russia as a more valuable ally to its mighty neighbor (Rossiiskaya gazeta, December 26). Much media attention has been given to the partly televised virtual talks between Putin and Chinese President Xi Jinping on December 30, 2022, but the discrepancy in perspectives between the two leaders is difficult to hide, even if the official Kremlin readout of the event omits Xi’s words on the difficult road to peace in Ukraine (Kremlin.ru, December 30). Putin was eager to focus on military-technical cooperation, but Xi, in his much shorter opening statement, did not say a word about it, instead focusing on cross-border ties (Meduza, December 30). Importantly, the Chinese leader did not find it opportune to accept Putin’s invitation to pay a state visit to Moscow in the spring.

Much could change in Russia

This caution was probably dictated by the foreboding that much could change in Russia over the next few months, breaking the ugly continuity of 2022. On the battlefields of Ukraine, the state of trench warfare is far from stable, and the series of Russian missile strikes on Ukrainian critical infrastructure are hardly sustainable, with diminishing effectiveness (Novayagazeta.eu, December 29).

Putin needs a success, even if symbolic, to prove that the war is indeed going according to plan …

Holding defensive lines is a feasible strategic option, but Putin needs a success, even if symbolic, to prove that the war is indeed going according to plan (Nezavisimaya gazeta, December 24). The hard-won capture of Bakhmut, if it indeed happens, would hardly qualify even as a Pyrrhic victory, but a large-scale offensive operation could push the undersupplied and demoralized Russian army to the brink (Radio Svoboda, December 28).

The Ukrainian army keeps hitting logistic routes and command centers, carefully probing for weak spots in Russia’s defenses, and even a small tactical success will resonate soundly in Moscow (Meduza, December 29). Different elite groups in Russia are perturbed in dissimilar ways, but they all know that a protracted war will destroy Putin’s popularity, and their loyalty may expire preemptively and suddenly (Republic.ru, December 29).

Ultimately, Putin has no way out from the unfolding disaster, and he needs a more complete mobilization around his cause. Meanwhile, he also needs to keep up pretenses that life in Russia can carry on as normal.

The problem is not that he cannot have it both ways, but rather that he cannot have it either way: the country is unable to produce the collective effort necessary to sustain the war, and the costs and pains of the unwinnable conflict continue to traumatize Russian society. And so, the nightmare of deadly 2022 drags on, and Putin counts on its indefinite continuation. Yet, the Russian state’s very survival may depend on it ending, not in several years, but in a few months, or perhaps even weeks.