Despite tensions over Syria, Turkey is increasingly turning to Russia to secure its foreign and domestic policy needs. 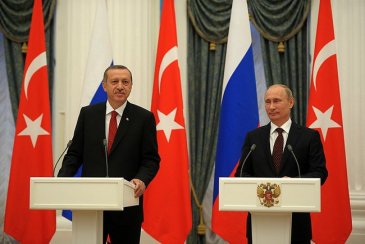 Though anticipated, the May 9 announcement by the Donald Trump administration that the United States would arm fighters of the Kurdish People’s Protection Units (YPG) in preparation for an advance on the Islamic State stronghold of Raqqa in Syria brought a swift and angry response from Turkey.

Demanding a policy reversal, Minister of Foreign Affairs Mevlut Cavusoglu noted ominously that any arms obtained by the YPG were a direct threat to Turkey — strong words from one NATO ally to another.

This fallout with the United States benefits Russia

For Turkey, U.S. support for the Kurdish Democratic Union Party (PYD) in Syria and its armed wings, the YPG and the Women’s Protection Units (YPJ), is framed domestically as a deliberate effort to strengthen Turkey’s perceived internal enemy, the Kurdistan Workers’ Party (PKK). This fallout with the United States benefits Russia. Since the July 15 coup attempt in Turkey, Russian President Vladimir Putin has been stepping in to capitalize on the worsening Turkish–American relationship, reviving the prevailing Western concern over “losing Turkey.”

Turkey’s relations with Europe are also faltering. The April 16 constitutional referendum establishing an executive presidency was widely criticized by European election monitors, and European leaders emphasized the need to safeguard Turkish democracy. And while Trump duly congratulated Recep Tayyip Erdogan, the U.S. Department of State warned of the need to protect the “fundamental rights and freedoms” of all Turks, “regardless of their vote.”

This lukewarm reception of Erdogan’s narrow victory mirrored the West’s weak condemnation of Turkey’s coup attempt in July 2016. Then, as now, it was Putin who supported Erdogan, noting that the referendum was “exclusively an internal matter” of the Turkish republic. This succinct support for state sovereignty illustrates the growing understanding between Putin and Erdogan, whose authoritarian populisms and regional ambitions make them uncomfortable, if necessary, bedfellows.

Anti-Western rhetoric has grown in Turkey

In response to rising criticism from Europe, anti-Western rhetoric has grown in Turkey. Domestic politics increasingly define the foreign policy of the ruling Justice and Development Party (AKP), and Erdogan’s focus on pushing through a constitutional referendum to consolidate his power has served as a driving force since the AKP briefly lost its parliamentary majority in the 2015 elections.

In an attempt to shore up nationalist sentiment, the AKP’s deeply unpopular Syria policy has found scapegoat in the refugee return deal the EU signed with Turkey in March 2016. Despite Turkey’s efforts to stem the tide of refugees to Europe, the EU has not lifted its visa requirements as promised.

The European response to the coup attempt a few months later paled in comparison with the EU’s concern over the human rights abuses that followed, leading Cavusoglu to state, “Unfortunately the EU is making some serious mistakes. They have failed the test following the coup attempt.” Meanwhile, the AKP laid the blame on the United States for harboring the Islamic cleric Fethullah Gulen, widely believed in Turkey to have been behind the coup.

… the two countries diverged on Syria

Nowhere are Turkey’s partnerships more complicated than in Syria, where the need to align with powers that can satisfy its domestic political and security needs drive an inconsistent Turkish policy.

Although Turkey already had substantial trade relations with Russia, particularly in the construction, tourism, and energy sectors — Turkey relies on Russian gas and is Russia’s second-largest consumer — the two countries diverged on Syria.

When Russia entered the war in September 2015 to prevent the defeat of the Assad government, it did so to secure its own military and economic interests, particularly natural gas pipelines passing through Syria. Two months later, Turkey downed a Russian plane on the Turkish–Syrian border, further souring relations. Russia imposed economic sanctions on Turkey that, according to early estimates, cost Turkey $10 billion in lost trade alone at a time when the Turkish economy was already in decline.

Putin’s support for Erdogan after the failed July coup was therefore timed perfectly. By August 2016, in a major policy turnaround, Turkey abandoned its absolutist position on the removal of Syrian President Bashar al-Assad, and by the following January, Turkey’s deputy Prime Minister Mehmet Simsek stated at the World Economic Forum in Davos that Turkey could no longer “insist on a settlement without Assad.”

This opened possibilities to coordinate with Russia and Iran on a diplomatic solution to the Syrian crisis. The start of peace talks in Astana in January was significant because these three new partners were leading the process, with the United States only observing it. Notably absent was the Syrian Kurdish PYD, which Turkey opposed for its links to the PKK. However, despite three rounds of talks, there has been little success, and the fact that the opposition boycotted the third round of talks in March, allegedly under Turkish instruction, illustrate the extent to which the negotiations are yet another arena to protect respective national interests.

After the Assad government launched a chemical attack on Khan Sheikhoun on April 4, the international outcry gave Turkey another opportunity to reformulate its Syria policy. Erdogan’s response  — now referring to Assad as a “murderer” — was equally decided by moral outrage and his need to heighten nationalist sentiment leading up to the referendum. Even though the U.S. response to the attack was similar, it did not usher in realignment.

Unilateral Turkish airstrikes on Kurdish YPG forces in Derik on April 25 dispelled possibilities of cooperation with the United States. Instead, the YPG forces moved toward closer collaboration with the U.S. military to secure the border and prevent further attacks on Syrian Kurdish coalition allies.

In sum, Turkey’s persistent fear of Kurdish autonomy and the AKP’s ability to mobilize nationalist fury among its electorate on this issue have been the guiding arrows of its Syria policy.

This weakens Turkey’s traditional Euro-Atlantic commitment, replacing it instead with greater autonomy to pursue its regional foreign policy interests. Though not without persisting tensions, the Turkey–Russia rapprochement benefits both parties strategically and economically.

The two countries are drawn together in a complex system of geopolitical checks and balances. For Russia, having ties with a strategic NATO country has the added value of weakening NATO by raising questions regarding Turkish loyalties. The Turkey–Russia relationship further serves as a balance against Western dominance in the Middle East after the Arab uprisings.

For Turkey, Russia is indispensable to keep a check on Kurdish autonomy and to shore up a suffering economy. Meanwhile, by not making a clear stand on the Kurdish issue, Putin is able to keep Turkey in check — for now.

The author writes: “After the Assad government launched a chemical attack on Khan Sheikhoun on April 4, the international outcry gave Turkey another opportunity to reformulate its Syria policy.”
The question of whether such an attack occured, and who in case was responsible for it, is highly disputable.

Thank-you for your comment. Yes, I am aware that there has been controversy over who was responsible for the attack. However, Turkey’s response was in line with the consensus that it was an attack by the Assad government, particularly as this was reinforced the AKP’s earlier sustained position regarding the removal of the Assad government. The shift in their position regarding Assad has been instrumental (based on containing the Kurdish threat) whereas their previous position was more ideological.

[…] capitalize on worsening Turkish-American relations, reviving the West’s concern over “losing Turkey.” Despite conflicting ambitions, Erdogan and Putin seem to be able to find some common ground […]