The time for this year’s Nobel Peace Prize is coming up, and as identified by PRIO’s Director, there are many worthy laureates. 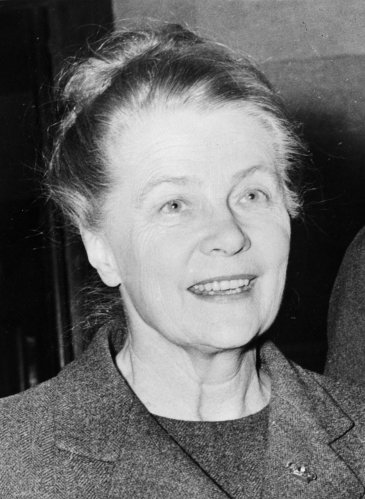 35 years ago, Alva Myrdal (1902-1986) received the prize for her work with nuclear disarmament – a question that has unfortunately resurfaced and is again a likely theme for the peace prize. To a peace researcher, Alva Myrdal’s approach and attitude towards the role of knowledge in reversing a negative conflict trend is inspiring, particularly at a time when darkness appears to be drawing ever closer. As expressed by the Nobel committee chairman,

“…her name has become a rallying point for men and women who still cling to the belief that in the last resort, mind is bound to triumph over matter.”

In 1962 Alva Myrdal was appointed chief negotiator of the Swedish delegation for nuclear disarmament negotiations in Geneva, and from 1967 she also held the position as Minister for Disarmament in the Swedish Government. After 1973, she continued her disarmament efforts, this time by seeking to influence political developments through popular information and mobilization, mainly through her book The Game of Disarmament, published in 1976.

She was awarded the Nobel Peace Prize in recognition of her work founded on a combination of gathering of research information, diplomatic excellence and a deep personal commitment

On December 10, 1982, she was awarded the Nobel Peace Prize in recognition of her work founded on a combination of gathering of research information, diplomatic excellence and a deep personal commitment. She performed this work during a period of the Cold War when the chances of success were minimal, but the cost of failure could be catastrophic. A period in which, as she put it, despite all resistance and disillusionment, it is not worthy of a human being to give up.

A year prior to winning the Nobel Peace Prize, she was awarded the ‘People’s Peace Prize’; a grassroot initiative bestowed partly as a protest for Myrdal not being recognized by the Nobel Committee despite numerous previous nominations. That she was awarded this ‘People’s Prize’ testifies to her important role for the peace movement – a movement that grew stronger in Europe during the period Alva Myrdal was working for disarmament. Myrdal considered the peace movement to be central for creating pressure to influence the higher political levels of the democratic side in the disarmament negotiations, political pressure that could revise the nations’ understanding of the costs for a continued arms race. Research would label this as changing the actors’ rational calculations, and thereby creating the potential for opening up to new possibilities for disarmament and – as Myrdal saw it – moderation. Her estimates would prove to be correct, in particular with regard to short distance and tactical nuclear weapons.

Myrdal’s arguments were often research based, which made them precise and demanding

During the nuclear disarmament negotiations, Alva Myrdal was recognized as being highly knowledgeable, as well as being well informed in many of the technical aspects. Myrdal’s arguments were often research based, which made them precise and demanding – not only to her adversaries, but also to allies in the peace movement. She calls for rationality, objectivity, and realism on both sides. She underlines the need to formulate substantiated and achievable goals, instead of broad slogans and utopian visions. She emphasizes the need for highlighting viable measures going forward. Research provided her with this base. As she expressed in her Nobel lecture when receiving the prize together with Dr. Garcia Robles: “Maybe I should add – and I hope this does not sound boastful – that we are two delegates who have shown at the disarmament negotiations and in the United Nations that rhetoric is by no means enough. We have tried to speak for greater emphasis on analysis, and constructivity.”

At a conference commemorating Alva Myrdal’s 100 year celebration in 2002, Peter Wallensteen (Professor of Peace and Conflict Research at Uppsala University) stated that Alva Myrdal should be recognized as a model for how to combine research in peace and security with practical work. In this, she made a number of concrete contributions.

An extensive contribution was made by leading the efforts to create the Stockholm International Peace Research Institute, SIPRI, established in 1966 at a time when peace research was still highly normative, rather than empirical. This was something she helped to change through SIPRI, along with the efforts of the Peace Research Institute Oslo (PRIO), already established in 1959, and later the Department of Peace and Conflict Research at Uppsala University, among others. As early as in 1966, Alva Myrdal also encouraged the universities to support peace research, as she noted the lack of education on the subject of peace, an issue close to her heart. 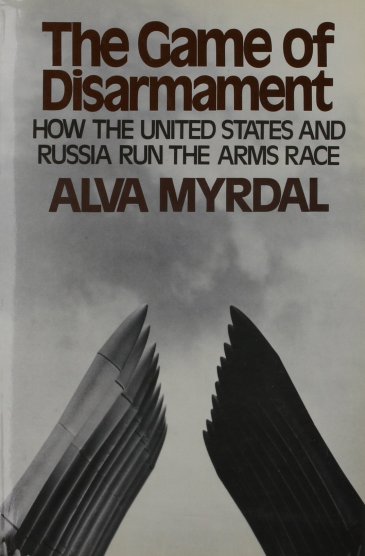 Today, the empirical tradition that Myrdal contributed to is strong within peace and conflict research. This could provide us with a better foundation for what we today call evidence-based decision making – if we decide to operate like Alva Myrdal. Here, she made a contribution through her own working method, which combined research and politics. For example, in her book The Game of Disarmament, she frequently refers to research and data, specifically from SIPRI, and comments on what these can tell us about the existing political debate. What is more, she makes certain explicit evaluations of how far the interpretation of research results and data trends can be drawn in formulating credible political arguments for specific questions. Lack of knowledge, on the other hand, or allowing emotion to triumph over reason, she viewed as major obstacles for peace and development. Today, this is no less concerning, as it is a prominent issue in debates about information, propaganda, and “fake news”. Now as before, it is essential that we use our knowledge and methodological skills to form our own opinions.

Alva Myrdal’s life and writings provide rich material and suggest a hypothesis for a peace researcher – especially on women’s different roles in the work for international peace and security. Being active during a period of the 1900s that entailed major social changes and the negotiation of difficult political questions, Alva Myrdal wanted to contribute to a better situation for both men and women. This is an area of major importance today, as can be seen, for example, in Sweden through its feminist foreign policy, and in Norway’s efforts to strengthen women’s participation in peace processes.

Current research substantiates Alva Myrdal’s standpoints on many of the questions she brought forward. It points towards her being correct, in that the broader questions concerning gender equality really are connected with possibilities for peace and economic development, and that the participation of women is important to building a better peace for everyone in a society. Her own life and work gives insights into female participation in higher level decision-making and direct participation in peace negotiations, where Alva Myrdal was in many ways a forerunner and a role model. She was one of the first female senior directors in the UN system; she was the first married woman to be appointed Swedish ambassador (to India); she was chief negotiator in the Swedish delegation to the disarmament negotiations in Geneva; and she was a minister in the Swedish government. Globally, as emphasized in research, these are all spheres that still to this day are dominated by men.

In conclusion, I want to return to her personal commitment – which in 1982 inspired the Nobel Committee, and which we all need to be inspired by today. In a situation where it may be tempting for us to switch from the news to So You Think You Can Dance, and to ignore the world’s problems, she probably wants to remind us that every person can do something, not least by participating in the public debate in an informed manner. She would emphasize the need to continue the research on how to create, in PRIO’s motto, “a world in which violence is the exception and peace is the norm“, and to actively use this knowledge in practice. Finally, she would tell us not to give up in the face of resistance, since as she herself underlined, these are very difficult and complex issues. As she put it in 1980 when she received the Albert Einstein Peace Prize:

“I have, despite all disillusionment, never, never allowed myself to feel like giving up. This is my message today; it is not worthy of a human being to give up.”