Last week, Norway made history with Ine Eriksen Søreide becoming the country’s first female foreign minister. Even in relatively gender-equal countries like Norway it is still rare to find women holding top positions in the so-called “hard issue” sectors of foreign affairs and peace and security. Barriers to the full involvement of women in work to prevent and resolve violent conflicts still persist. 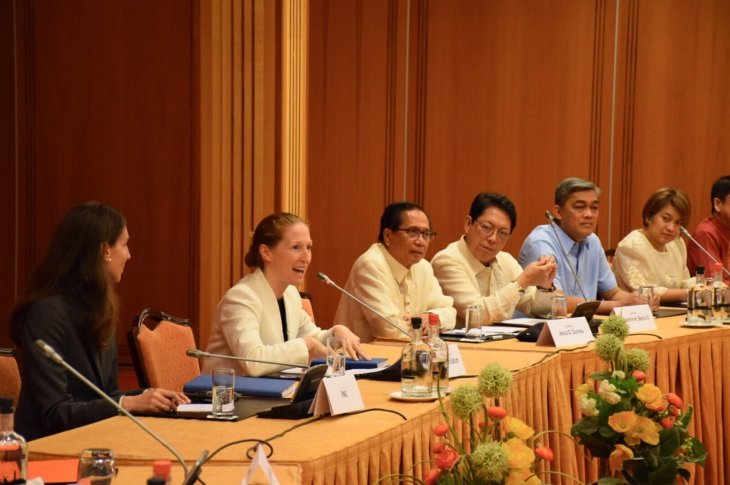 Women’s underrepresentation in the peace and security sectors is one of the issues on the United Nations Security Council’s agenda. Today, the UN Security Council holds its annual open debate on Women, Peace and Security. Seventeen years have passed since the Security Council adopted Resolution 1325 and made a commitment to increase women’s participation in all matters of international peace and security. Since then progress has been made in advancing the commitments of the UN and its member states to the Women, Peace and Security agenda, but women’s meaningful participation remains low. Nowhere is this more visible than in peace mediation.

A network of Norwegian women mediators

That is why in 2015, the Norwegian government decided to create, together with the other Nordic countries Denmark, Finland, Iceland and Sweden, a regional network of Nordic Women Mediators. The network includes over 100 women from all five countries who work in the fields of peace mediation, peacebuilding and negotiations.

At the national level, the Norwegian Women Mediators network – known as NWM-Norway – includes 40 women with diverse backgrounds and expertise. From diplomats and lawyers to military and police officers, to communications and logistics specialists, Norwegian members have experience either directly on mediation teams or in supporting negotiations. Our members are involved in peacemaking processes in countries such as Colombia, Iraq, the Philippines and Syria, and have experience from past processes in for example Afghanistan, Israel-Palestine, Nepal, Sri Lanka and Sudan.

The mission of the Norwegian network is to enable the inclusion and meaningful participation of women mediators and peacebuilders in all phases of peace and dialogue processes. As members of the network we work to strengthen Nordic women actively involved in international peacemaking efforts as well as to strengthen the participation of women in peace processes globally. How do we go about doing this?

Second, to strengthen the participation of women globally in peace processes we will:

The Nordic Women Mediators is not the only regional women’s network of its kind. In fact, the NWM was inspired by a women mediators’ network initiated by the South African government in 2013. Since then, three more networks have been established or are underway. In March this year the African Union established a continent-wide Network of African Women in Conflict Prevention and Mediation, also known as FemWise-Africa. This week in Rome, Italy formally launched the Mediterranean Women Mediators Network. And the UK has also initiated the establishment of a Commonwealth women mediators network.

In his most recent report on Women, Peace and Security to the Security Council, the UN Secretary-General expresses great appreciation for all these initiatives. He also stresses the importance of ensuring collaboration between all the networks to promote mutual learning, information-sharing and a best possible use of expertise and resources. This is also a core objective of NWM-Norway.

Including women increases the chance for peace

NWM-Norway’s goals to strengthen the participation of not only Nordic women but also women elsewhere in the world – particularly in conflict-affected countries – are much needed. The formal peacemaking sector is dominated by men. Only two per cent of chief peace mediators, nine per cent of peace negotiators, and four per cent of signatories to peace agreements are women. The existence of networks of women with experience in these areas of work not only makes visible the many qualified (and under-utilised) women that are out there, but also provides a platform for these women to support each other in entering the male-dominated field.

Making sure that the people involved in formal peacemaking represent a more balanced group is also important for peace itself. When women participate in formal peace negotiations and are signatories to peace agreements, those agreements are much more likely to last. Including women of diverse backgrounds in the political decisions that bring a country from war to peace has a significant impact on the likelihood that the country will remain peaceful. This is not necessarily because women are inherently peaceful, but because a diversity of perspectives have been included in discussions about what a peaceful society should look like.

Ahead of today’s Security Council debate, member states have been challenged by the French chairmanship to adhere to the principle of “no backsliding” in the commitments made on women’s inclusion. The Secretary-General, in his report to the Security Council, also points to some concerning trends; in 2016 women continued to be underrepresented among delegations to peace processes led or co-led by the UN; women continued to be underrepresented as chief negotiators; and there were fewer requests for gender expertise for processes led or co-led by the UN. Similarly, consultations with civil society dropped from 100% in 2014 and 2015 to 86% in 2016.

The percentage of signed peace agreements containing gender-specific provisions also declined in 2016, which is particularly worrying after consistent increases between 2010 and 2015. Nevertheless, the Colombian peace agreement that was reached in September 2016 was a remarkable exception to the negative trend seen in 2016, in that it is arguably the most gender-inclusive peace agreement to date.

With the exception of the Colombian experience, the Secretary-General emphasises that these worrying developments highlight “the need to translate good practices into standard practice” so that “effective mechanisms are established to ensure the meaningful measurement of results”.

The many regional networks that are now being established represent one type of such mechanisms that can hopefully work to prevent further backsliding. As members of NWM-Norway, we are ready to do our share to achieve equal and meaningful participation of women in peace mediation – and ultimately contribute to sustaining peace.

The authors of this blog post are members of the NWM-Norway Steering Group.