Why do non-state groups engage in violent conflict with each other? Non-state conflict has been widespread in several countries in Sub-Saharan Africa, including D.R. Congo, Sudan, Somalia and Burundi. This type of fighting includes both formally and informally organised groups who fight each other without engaging the state, such as Al-Shabaab and the Ogaden National Liberation Front (ONFL) in Ethiopia, Christians and Muslims in the Central African Republic, and violence between Birom and Fulani in Nigeria.

Much of the literature within the field of conflict research has focused on the state as one of the participants in internal armed conflict, leaving less attention to inter-group fighting. Yet, for the groups and communities affected by non-state conflict, the consequences of this type of violence are analogous to those of civil war, in terms of battle-deaths, forced migration and war-related diseases, and more than 60 000 people lost their lives in Africa between 1989 and 2008 due to non-state violence. Also, there is great variation in time and space of non-state conflict occurrence across and within African states, where some areas see little conflicts between groups, while others experience multiple instances of inter-group violence.

A new study covering 46 Sub-Saharan Africa between 1989 and 2011 investigates under which conditions inter-group conflict is more likely. The findings suggest that the combined effect of weak state capacity and economic marginalization of groups increases the risk of non-state conflict by raising both the willingness and opportunity to engage in conflict. The expectation that politically excluded groups is more likely to fight in a weak state context is not borne out in the empirical evidence. In light of other evidence, this could suggest that such conditions may be more prone to violence of another kind, i.e., mobilization against the state. Overall, these findings highlight the importance of a functioning state for maintaining peaceful inter-group relations, while they also lend support to earlier research that reports divergent effects of economic and political inequalities on civil conflict risk. 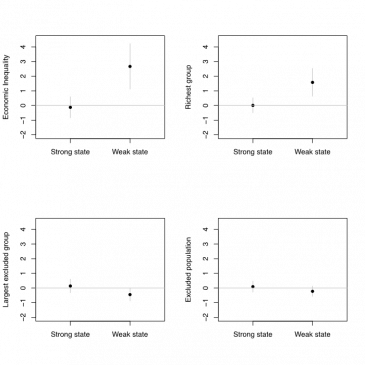 Figure 1. Estimated log odds of non-state conflict in Sub-Saharan Africa with the presence of economic and political inequality in weak and strong states, 1989-2011.

Read more in a recent publication in the journal Civil Wars.

[…] Inter-group Conflict: The Role of Weak State Structures and Exclusion […]