#HearMeToo is the theme of this year’s 16 days of activism to end violence against women. Responding to this catch-cry, as researchers, there is much we can do to link analysis to a theory of change. Reports of sexual and gender-based violence can deliver protection to victims. But there is also the potential to predict where and when sexual violence in conflict will take place from more in-depth analysis of sexual and gender-based violence reports. Moreover, this knowledge raises the question: if we can predict sexual violence in conflicts by looking at patterns and counts of reported violence, then don’t we also have the moral responsibility to prevent that violence in the first place?

Analysing conflict-related sexual violence reports – even though they may reflect only the ‘tip of the iceberg’ of the violence – gives us the when, where, and who, and the way forward to prevent such violence. What are the early warning signs of sexual violence in armed conflict in conflicts with different levels of intensity? There is a large volume of research on sexual violence in wars, particularly within Sub-Saharan Africa and increasingly the Middle East. But our knowledge is relatively limited when it comes to understanding incidence and reporting conditions in the protracted conflicts that often experience waves of ‘low-level’ violence over many years, coupled with short episodes of intense violence – such as Myanmar. 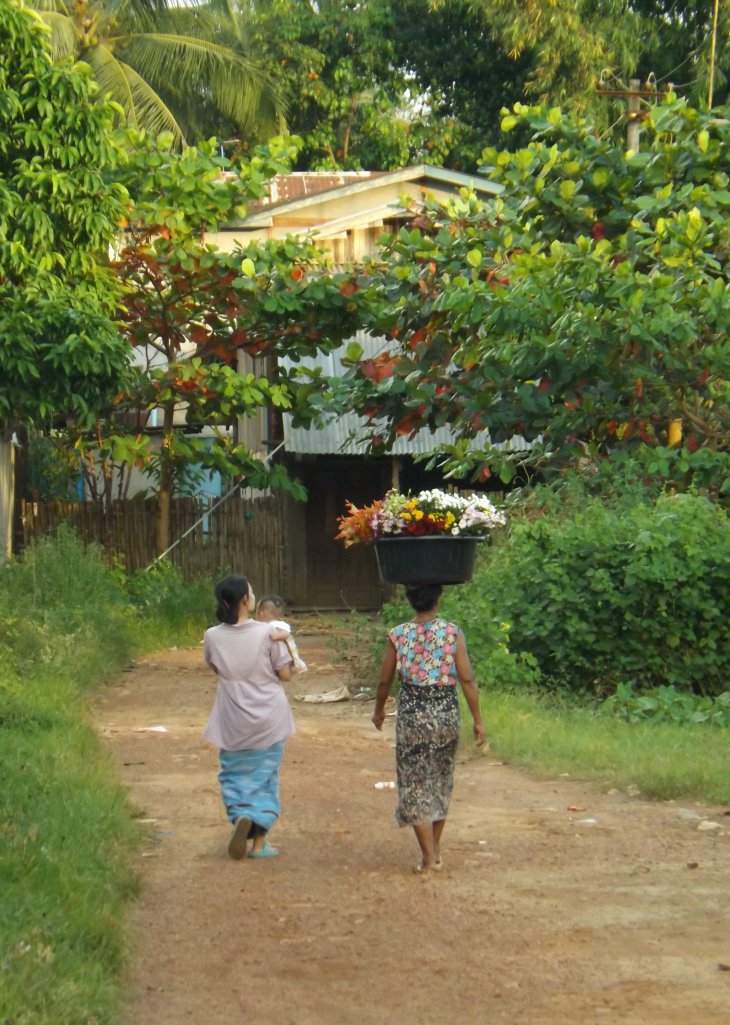 Women in an ethnic minority state in Myanmar.

The 2018 Nobel Peace Prize has been awarded to Nadia Murad and Denis Mukwege for their peace activism to end the use of sexual violence as a weapon of war and armed conflict. This decision of the Norwegian Nobel Committee bears witness to all those victims who survive without substantial justice or reparation, and to women’s human rights defenders (WHRD) around the world including victims and WHRD in Myanmar and the broader Asian region where we have focused our research. Just as Nadia was targeted by ISIS as a female member of the Yazidi ethnic minority, women from ethnic minority groups are being targeted in Myanmar – where impunity for sexual violence crimes remains widespread. In our research on Myanmar, we have found that sexual and gender-based violence often precedes and anticipates the outbreak of conflict (and migration crises) and make peace even more difficult to achieve. As Razia Sultana, a Rohingya rights lawyer and civil society representative said at the UN Security Council in April, with respect to sexual violence perpetrated by the Myanmar armed forces: “The international community, especially the UN Security Council, has failed us. This latest crisis should have been prevented if the warning signs since 2012 had not been ignored.”

We could have predicted the sexual violence perpetrated against Myanmar’s Rohingya people in 2017: our 1998-2016 dataset reveals that sexual violence often occurs just before and during periods of heightened conflict intensity.

We have compiled the new PSVAP (Preventing Mass Sexual Violence in Asia-Pacific) dataset of all existing reports of types of sexual violence and gender-based violence by official, unofficial, and media organisations to explore the patterns of reporting and of reported violence in three active conflict environments: Myanmar as well as the Philippines, and Sri Lanka (and shortly Colombia also). We wanted to see how far and in what ways reported (but not necessarily verified) violence matched our assumptions based on existing research studies about ‘where’ conflict-related sexual violence occurs (and is reported), ‘who’ perpetrates it, and ‘when’ it is used as a weapon.

Conflict in these locations is protracted and can shift across the spectrum from high intensity to low intensity in the space of a year. We wanted to test the idea that such violence rarely occurs in ‘low intensity’ conflict environments, and that the reports are even rarer than the actual violence perpetrated. To do this, we complemented our PSVAP dataset with our field research data from talking to key international, government, humanitarian, human rights and women’s rights organisations working in these conflict situations. Based on this, we could have predicted the sexual violence perpetrated against Myanmar’s Rohingya people in 2017: our 1998-2016 dataset reveals that sexual violence often occurs just before and during periods of heightened conflict intensity.

The rise in sexual violence reports revealed in the dataset does not mean its incidence is also increasing. Rather, with Myanmar’s democratic transition there is increased freedom to report and a greater presence of non-governmental and international actors on the ground. This statement is not controversial – but to leave it at that would be problematic. 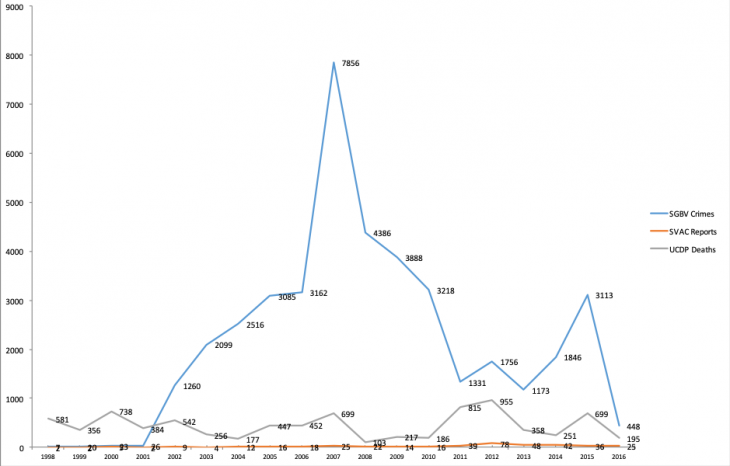 Addressing sexual violence is not a negotiable condition for achieving peace.

Building the PSVAP database has led us to further ask how we can use data and knowledge on patterns of reporting to intervene. With more information on the location of the crimes, the perpetrators, and the organisations reporting sexual violence in conflict, we can better report, respond to, and prevent situations of future violence. We need to know where human rights defenders and humanitarian workers can be best located to assist survivors and report on the crimes. They put their lives at risk documenting such violence, so when those being targeted tell their story – at the risk of more violence, retribution, shame and stigma – there must be an effort to mount a response that protects and prevents. These experiences should be part of the peace process discussions, specifically those on the ceasefire implementation at the 21st Century Panglong Peace Conference. Addressing sexual violence is not a negotiable condition for achieving peace.

The Nobel Peace Prize is a reminder of who has the power to change the world – Denis Mukwege and Nadia Murad follow awardees Malala Yousafzai, Kailash Satyarthi, Tawakkol Karman, Leymah Gbowee, and Ellen Sirleaf Johnson. These individuals have forever changed how we view sexual and gender-based violence in conflict situations as well as women’s participation in peace processes, and rights to education and freedom of expression. Nadia has said that, more than anything else, “I want to be the last girl in the world with a story like mine.” Her voice will give courage to others who can come forward to tell and testify so that appropriate guilt and consequence can follow. Denis’s example will encourage other men to join the movement against male violence whether in conflict or peace: “It’s not a woman question, it’s a humanity question, and men have to take responsibility to end it”. Nadia Murad and Denis Muwege’s Nobel Peace Prize award recognizes all those victims of conflict-related sexual violence including among Myanmar’s ethnic minorities and human rights defenders who cry out #HearMeToo.