Write about a book that has been particularly important for me? A difficult task! In those formative youthful years when one is attempting to shape one’s identity, in the profession as well as in society, many books and articles exert an influence – now in one direction, then in another. I could have mentioned Johan Galtung’s Forsvar uten militærvesen [Defence without armed forces] (1959) which contributed to my conversion to pacifism, as well as to my becoming a peace researcher.

Or Erich Fromm’s The Sane Society (1955), which almost turned me into a Utopian socialist. Or Hannah Arendt’s Eichmann in Jerusalem (1963), which made me aware that atrocities could be committed by bureaucrats.

Or my first sociology textbook, Erik Allardt and Yrjö Littunen’s Sociologi (1962), which used an example from Paul Lazarsfeld to introduce five ‘self-evident truths’ on the first page, only to go on to reveal that all the assertions were empirically incorrect.

Or of course Aschehougs konversasjonsleksikon, the encyclopedia that I grew up with, or the expanded version, Store norske leksikon, that was my children’s childhood companion.

Or I could simply have capitulated and said (which is true) that I am a slow reader and not particularly patient, so that I was influenced significantly more by articles than by books. 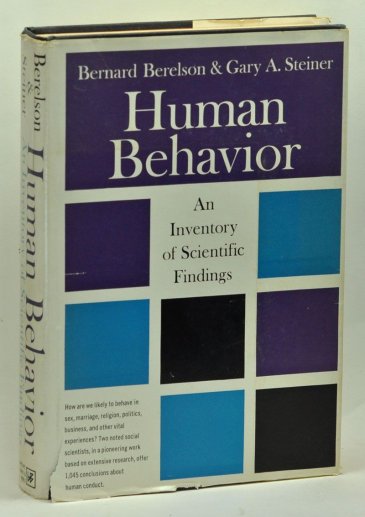 However, I have chosen Human Behavior: An Inventory of Scientific Findings by Bernard Berelson & Gary A Steiner (Harcourt, Brace & World, 1964). This book attempted to summarize everything that – at the time of its writing 50 years ago – was considered reasonably certain knowledge in the field the authors call behavioral science, with a primary focus on psychology and sociology. They catalogue this knowledge in the form of 1,045 findings, grouped into 14 chapters.

So, this is not a book for reading from cover to cover, but rather a resource for looking things up and use as an aid within one’s areas of particular interest. Its similarity to a dictionary may help to explain why I fell for it. Another explanation is that my copy of this book was a gift from my mentor, Johan Galtung, when I started working at the Peace Research Institute Oslo (PRIO) as a research assistant in 1964, the same year as Human Behavior was published. At about the same time, Galtung wrote a lyrical review in Dagbladet, where he described the book as an example of ‘a book that concludes one epoch and introduces the next’ (1).

… an example of ‘a book that concludes one epoch and introduces the next’.

It is not particularly surprising that the book had many, frequently positive reviews, and that it has been cited hundreds of times since its publication (2). Bernard Berelson was a well-known figure in American sociology, particularly media studies, and headed the influential Population Council. Gary Steiner was Professor of Sociology at the University of Chicago, but had also worked in marketing.

Summarizing this kind of book is almost impossible. It contains interesting chapters on social stratification, about families, and about institutions. But my current memory is that it was Chapter 8, on the study of small groups, that I studied with greatest enthusiasm.

In the early days of peace research, we moved seamlessly between different levels of social organization, and the findings on patterns of interaction in small groups inspired hypotheses about interaction between nation states. It was no doubt in this chapter that I first discovered Festinger’s study of an area of housing for married students at MIT (3). His findings of how even small physical distances can affect social interaction would later become an important source of inspiration for my own work on geographical distance and positive and negative interactions between countries. Neighbouring countries trade more with each other, but most wars also occur between neighbouring countries. Even so, there is broad agreement that trade (and other forms of positive interaction) tend to reduce conflict – even when one controls for the neighbour relationship.

Things would soon change, but not quickly enough to avoid a long-lasting and sometimes bitter conflict about the chairs in peace research at Oslo and Uppsala – a conflict that ended with one winner from each camp. The professorship at Uppsala went to Peter Wallensteen, who clearly identified himself as a peace researcher, while the professorship in Oslo (after Galtung retired in 1978) was captured by a political scientist and later abolished (4).

I also remember being fascinated by findings about sibling birth order. First-born children are likely to be more serious and less rebellious than their younger siblings (p. 73) and they are more conformist within a group (p. 255). Within a family, younger siblings are more intelligent than their older siblings. Possible explanations are either that the younger siblings learn from the older siblings, or that the earlier births are more physically stressful for the infant. In the population as a whole, however, later-born children are less intelligent because larger families occur more frequently in groups with lower IQs. A debate continues to rage among psychologists concerning the robustness of these findings. I cannot remember that we put these findings to any use for the purposes of peace research, and perhaps that was just as well. Much later, Frank Sulloway used sibling birth order in an ambitious attempt to predict which people will be political or academic rebels, an attempt that with hindsight appears (to put it mildly) extremely controversial (6).

These two hypotheses on sibling birth order, however, provide good examples of how Human Behavior qualifies apparently simple findings by indicating that the findings are uncertain (‘likely’), that they may have various explanations, and that they may appear differently if one makes comparisons within a family or within the general population. Such careful qualifications run throughout the book, and the many references give the reader a good starting point for following up a topic further.

Human Behavior is of course a product of its time. The now tabooed word ‘negro’ has 15 entries in the index. Individuals are generally referred to as ‘he’ (see e.g. B2, p. 537), regardless of whether the gender is recorded. The research that is summarized derives overwhelmingly from American society – naturally enough since behavioral research had a stronger position in the United States, but also because only the authors relied only upon English-language literature.

Nevertheless, the book gives a good picture of the status of knowledge 50 years ago. Given the rapid developments within sociology since 1964, the book has a more limited value today as a starting point for in-depth exploration of a more specialized discipline. Even so, there may well be some aspiring sociologist or another who will benefit from reading (C4, p. 617) that ‘Within a society, social change is unlikely to be based on the lowest social stratum.’, based on findings from Lipset & Linz (7).

Some people will of course see the whole project as pointless, because scholarly knowledge cannot be summarized in this manner. When I eventually left sociology, it was not least because far too many people had such thoughts about everything that I considered to be the most interesting research. The field was particularly hard hit by some of the negative aspects of the student revolt. What started as a reasonable uprising against traditional authorities ended for many with submission under new authorities. The belief in systematic research was often replaced with pure activism (9).

In his review of Human Behavior in the Norwegian daily newspaper Dagbladet in 1964, Johan Galtung concluded optimistically that the ‘next edition of the book would undoubtedly be even better’. But a next edition was not to be. Gary Steiner, who had been appointed as a full professor of sociology at the University of Chicago at a very young age, died at just 35, two years after the publication of Human Behavior (10).

The need for summaries of existing research has not disappeared however, nor has the quest for robust findings been abandoned. Meta-analysis has become a small industry; and within health research there are now more than 7,500 Cochrane Systematic Reviews (11). The Annual Review of Sociology, the Annual Review of Psychology and the Annual Review of Political Science are among the most cited periodicals in their respective disciplines. But so far as I know, no one has attempted to assemble anything that resembles Human Behavior. Unless perhaps we count Wikipedia.