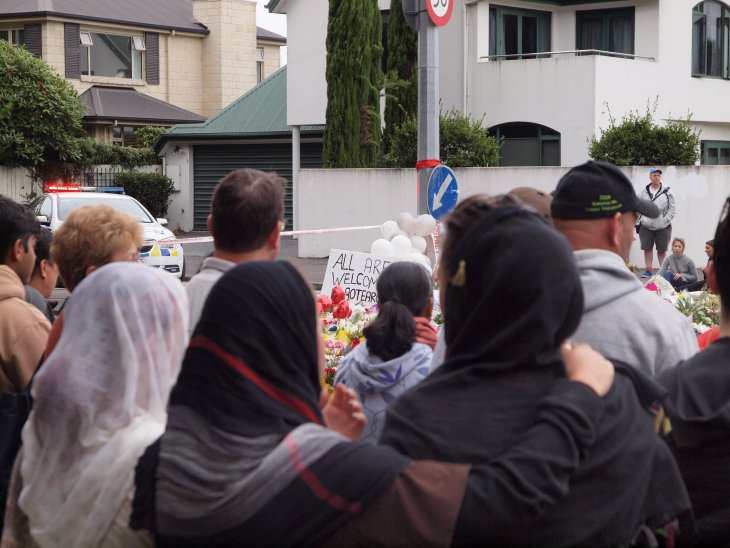 Women in veils console each other in front of a sign that reads “All are welcome in Aotearoa” (Aotearoa being the Maori name for New Zealand) at the Deans Ave floral tribute to the victims of the March 15th terror attacks. Photo: James Dann via Wikimedia Commons.

Known as one of the safest and most isolated countries in the world, New Zealand has experienced its darkest day, a terrorist attack perpetrated by a lone gunman against Muslim citizens in Christchurch in two mosques during Friday prayers. For us, in this antipodean part of the world, it is our 9/11 reckoning.

‘This is not us,’ is the resounding response across New Zealand (NZ) since the March 15th attack.

And yet this is us. While the gunman was an Australian born citizen – and much is being made of this in both NZ and Australia – he was able to live in and plan his attack as a resident of Dunedin, a city that is a five-hour drive to the south of Christchurch. He was able to procure his gun license in November 2017, practice his shooting techniques at the local rifle club and purchase successive weapons online from the Christchurch store, Gun City. He converted one of his purchases into a semi-automatic weapon.

As Kiwi journalist Steve Braunias writes, it would be false to describe this event as New Zealand’s end of innocence.

While New Zealand is a relatively peaceful country, ranking number one on the Global Peace Index in 2010 and the second most peaceful country in 2018, it has also been home to far-right extremist groups throughout the last century. Paul Spoonley, a NZ sociologist who researched 70 extreme right and white supremacist local groups in the 1980s, found that Christchurch was the home to most of these groups in NZ; their ideology linked to anti-Semitism and belief in the supremacy of the British race. One of the mosques affected by the terrorist attack on Friday has been a site of white supremacist attention in the past, receiving pigs’ heads delivered by a local Christchurch man, Philip Neville Arps, in 2016.

If we dig deep and across the poles of our planet […] we will see that we are connected in more ways than one. We face a frightening world of proliferating nuclear weapons and rising sea levels threatening island nations and where a few alienated, angry people, usually young men, threaten us all.

Today, the ease of access to the internet and the rise of social media has enabled the spread of these ideologies to new recruits on the web, in chatrooms, on Facebook and Twitter. Globalization has lowered the cost of international travel as well as allowed new online and offline alliances to be forged among right-wing, white nationalist groups in far corners of the world – including Norway and NZ. If we dig deep and across the poles of our planet as medieval Cumbrians did in Vincent Ward’s 1988 acclaimed film, The Navigator, we will see that we are connected in more ways than one. We face a frightening world of proliferating nuclear weapons and rising sea levels threatening island nations and where a few alienated, angry people, usually young men, threaten us all. In the New Zealand case the arrested gunman has clearly been influenced by his Norwegian kindred spirit who rendered the 2011 tragedy. New Zealand’s Prime Minister (PM), Jacinda Ardern has refused to say the name of the gunman to stem his notoriety and prevent future copycat attacks – and to focus on the victims, their loss to their grieving families and to the nation.

In the aftermath of terrorist attacks across the world, we frequently hear that the attacker was known to police in part because of domestic violence charges, making these findings unsurprising but also highlighting the importance of evidence in showing the links between violent extremism and violence against women.

The online spaces where the NZ gunman shared his manifesto as well as video footage of his rampage highlight the links between violent extremism and misogyny, racism, homophobia and other forms of bigotry and discrimination. The same platform (8chan) the gunman shared his intentions on was also the site where Gamergate was primarily based, in which a harassment campaign that included doxing, rape and death threats was used to target specific women working in or reporting on the gaming industry. That video is now being hosted in part by a website whose owner was fired as an administrator for 8chan for his alleged promotion of pedophilia and violent misogyny (he is also known for his online harassment and stalking of women). The website administrator’s response to NZ police’s request for cooperation highlights not only the gendered language these men frequently use with relative impunity, but also how little the law can regulate or even access these transnational spaces.

Seeking to understand those who join and promulgate extremist causes is a difficult but necessary task. We have to explain the root causes of violence without justifying it in order to stop future violence. Violent extremists target ‘others’, be they Muslims, immigrants, minorities, women, or, depending on their own ideology, left-wing politically-affiliated people. The killing of people seen as different, foreign, or inferior connects far-right extremism, white supremacist extremism, ‘incel’ extremism and Salafi jihadist Islamicist extremism. And as Michael Kimmel has suggested, violent extremists typically share one thing, their gender. Monash University’s Noorhuda Ismael in his study of Indonesian foreign fighters has found that their life trajectories demonstrate radicalization is rooted in a certain ideal of hegemonic masculinity. We cannot know fully yet what the gunman in Christchurch’s radicalization trajectory was, however, we do know that he lost his father as a teenager and that since then on his world travels he has sought out the camaraderie of other male role models – extremist, white male supremacist role models.

Now is the time to take women’s voices seriously in our efforts to counter and prevent violent extremism in all our societies.

In New Zealand, Muslim women’s early warning concerns about rising Islamophobia over the past decade were ignored or at least only minimally responded to by government. Anjum Rahman writes, “For more than five years, Muslim representatives knocked on every door we could, we spoke at every possible forum.” Why was she not heard? Rahman’s story shows the blind spot that authorities often have in PVE and CVE programming, targeting Muslim communities but paying scant attention to the growing threat of white supremacist violence. This violence frequently targets Muslim women who wear the hijab as they are frequently the most visible members of the community. The NZ security agencies tasked with this work are currently in a process of reckoning when it comes to past strategies as the Muslim community and others ask: how was the gunman missed? It is important that similar questions are asked in other contexts also since there is a common pattern here of women’s early warning calls not being heard or heeded. Think also of Marawi, in the Philippines: Before Islamic State took control of their city in 2017, women tried to inform local government of weapons stockpiling. They were turned away. Now is the time to take women’s voices seriously in our efforts to counter and prevent violent extremism (CVE/PVE) in all our societies. 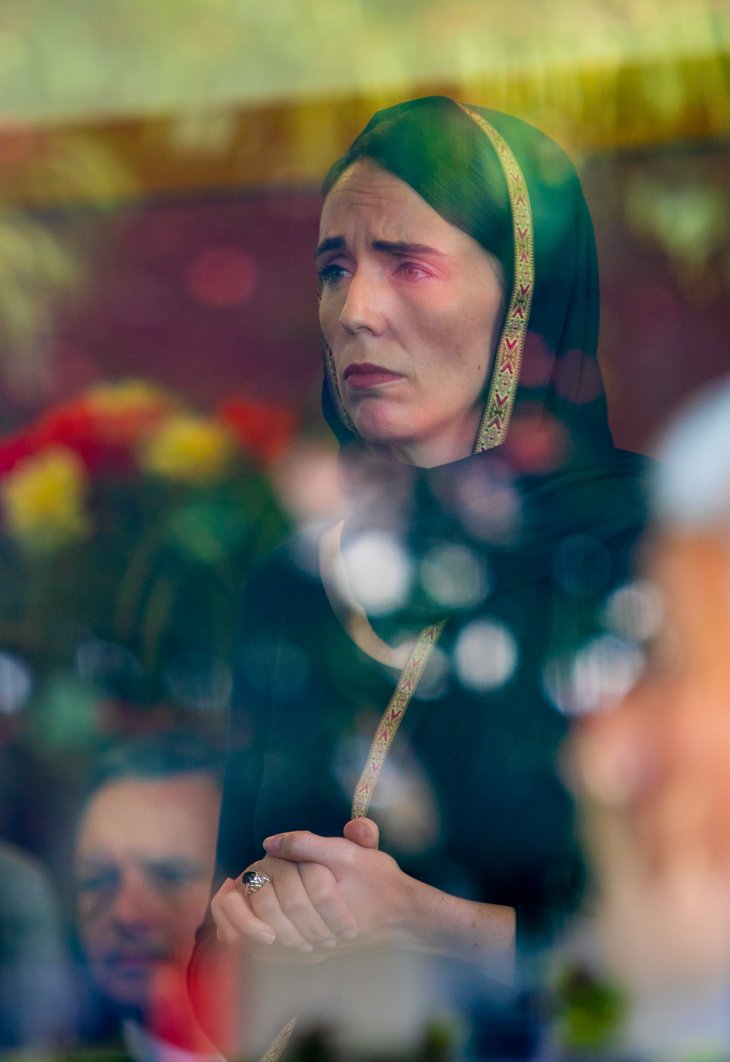 Communities, neighbourhoods and families have a crucial role to play in CVE and PVE and they need to be supported. United Nations Security Council Resolution (UNSC) 2242 (2015) requires states to consider a gender perspective on prevention and opportunities for experienced women to participate in high-level decision-making where prevention strategies are designed and implemented. UNSC Resolution 2178 (2014) calls for the need to empower women as a prevention response and mitigating factor to the spread of violent extremism and radicalization; and in June 2018 the Sixth Review Resolution of the Global Counter-Terrorism Strategy urged states and UN entities to integrate a gender analysis on the drivers of radicalization to terrorism into their relevant programmes, and to seek greater consultations with women and women’s organizations when developing CVE strategies.

[Ardern] has shown compassion – listening to and empathizing with the families and communities of the victims, as well as their cultural and religious needs. She has proven that typically feminine behaviour is powerful.

Our research on gender and preventing violent extremism at Monash GPS has underscored the important role of communities and families in P/CVE (CVE/PVE).Where there is more empowerment and self-efficacy in communities through programming focused on empowering women, and building peaceful communities, people, particularly men, reported being less likely to use violence as a political tool to address poverty and inequality, and both women and men were more likely to report concerns about violent extremism.

Leadership matters especially in times of crisis: New Zealand is lucky to have a PM who is a model of leadership. Jacinda Ardern has been decisive – immediately rallying her government to tighten existing and to institute new gun laws and to assist the victims. She has also shown compassion – listening to and empathizing with the families and communities of the victims, as well as their cultural and religious needs. She has proven that typically feminine behaviour is powerful, and – echoing Martin Luther King – Ardern has shown that only light can drive out darkness, only love can banish hate.

Jacqui True is a PRIO Global Fellow  and Director of Monash University’s Centre for Gender, Peace and Security. Yasmin Chilmeran is a Doctoral Candidate at Monash GPS. Melissa Johnston is a Postdoctoral Fellow at Monash GPS.