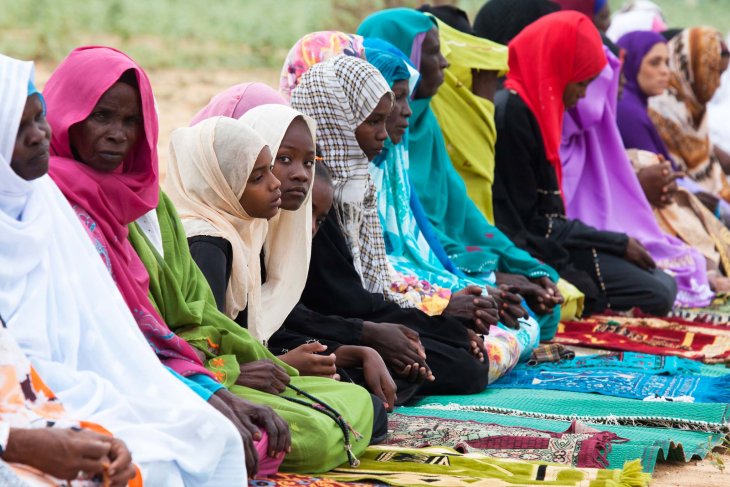 Sudanese muslims from El Fasher, North Darfur, attend the morning prayer at the outskirts of the city to celebrate the Eid ul-Fitr, the feast marking the end of the fast of Ramadan in 2012. Photo: Albert González Farran – UNAMID

Today is Eid, the Muslim festival that marks the end of Ramadan, the month of fasting. Families and friends will gather today to enjoy good food and each other’s company. Many Norwegian Muslim children look forward to celebrating Eid, and for many people the social aspects are just as important as the festival’s religious significance. In addition, many Muslims use Eid as an occasion to help those who are less fortunate, by making their annual payment of obligatory alms (zakat in Arabic), which in Sunni Islam are equivalent to 2.5 percent of annual income after living expenses. Zakat is one of the five pillars of Islam, together with the Declaration of Faith, Prayer, Fasting during the month of Ramadan, and the Pilgrimage to Mecca.

Zakat payments are usually made in connection with the festival of Eid. Ramadan, the month of fasting, has been a period of cleansing, self-denial and spiritual development. Many people use this time as an opportunity to share their good fortune with people who have less. We see this in Norway, too. We know from our previous research into Muslims’ enthusiasm for helping the poor that Muslims in Oslo are enthusiastic supporters of various types of charitable, humanitarian and development initiatives.

In autumn 2018, we conducted a questionnaire-based survey of Muslims in the Nordic countries, with a focus on issues relating to religion and economics. In addition, we have collated a large quantity of data from interviews with individuals and focus groups. Over the coming year we will present our findings in a series of articles and in a report on our findings from the questionnaire. But we think that much of what we are seeing in our data is so interesting that we want to highlight some results of particular on the day of this important Muslim festival.

Our questionnaire was completed by around 2,500 people living in the Nordic countries. All considered themselves to be Muslim. Thus, we included people with backgrounds from Asia, the Middle East and Africa, as well as from European countries. The study is not statistically representative of the Muslim population of the Nordic countries as a whole.

However, it provides a bird’s-eye view of the enormous diversity that exists among the backgrounds of Nordic Muslims. It also tells us something about patterns in attitudes and behaviour among Muslims from different backgrounds, with a particular focus on the relationship between economics and religion. Most of these attitudes and behaviours are invisible to society at large. So let us present three findings from our research:

No one should be surprised that religion – and culture – are important for determining people’s financial values and priorities. This is especially true in Norway, where strong religious leaders such as Hans Nielsen Hauge have exerted a huge influence on our attitudes to work and economic values and activity. We also find many of the roots of sociology in the debate about the significance of Protestant Christianity on the development of modern capitalism. Thus, we believe that the topics of our research are of key scholarly importance, and we look forward to analyzing in greater detail our data on Nordic Muslims’ economic values and practices, and to making our findings public. Meanwhile, we wish all Muslims: Eid Mubarak! Happy Eid!

Yes it is hard to distinguish between religion and social motivation but generally Muslims the world over are generous people.