As the Sudanese have ever more reason to celebrate the political declaration signed by the Forces for Freedom and Change (FFC) and Transitional Military Council (TMC), one may have some reservations and concerns but with optimism of a better future for Sudan. 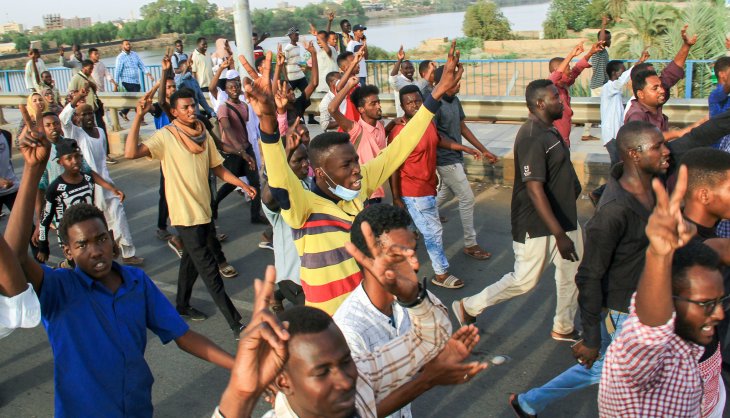 Protestors in Sudan in April. Photo: Hind Mekki via Flickr

The Sudanese Professionals Association (SPA), which is part of the Forces for Freedom and Change (FFC), stated after the conclusion of power-sharing agreement on 5th of July between the Transitional Military Council (TMC) and FFC that “Today, our revolution has won and our victory shines”. There is no doubt that the 5th July power-sharing deal and the subsequent political declaration both deserved to be celebrated by the Sudanese people, particularly the protesters who have shown exceptional determination and resilience.

The persistent defiance and nationwide mass demonstration on June 30 after the deadly crackdown of protesters by security forces on June 3 was a defining moment that contributed to the conclusion of the 5th July agreement. This demonstration has not only challenged the political power calculus of the TMC of crushing the uprising but it has shown that FFC enjoys a very broad support from all spectrums of Sudanese society and exceptional capacity to mobilize Sudanese people to sustain the uprising. The agreement and political declaration have unlocked the impasse on abolishing the TMC and replaced it with sovereign council with civilian majority. With this agreement and political declaration, all transitional institutions will not only have civilians as a majority but they will be headed by civilians, with the exception of the sovereign council that will be headed by the military during the first half of transitional period.

But while there are reasons to celebrate, there are also reasons to be cautious about the power-sharing agreement and political declaration.

One important provision of this agreement is the establishment of an independent national investigation committee for the atrocities committed since the eruption of uprisings in December 2018, including the killing of innocent protesters on 3rd of June. Other important aspect of this agreement and political declaration is the affirmation of equality of citizens before the law regardless of race, religion and sex with clear focus on equal rights for women. These commitments are meant to undo the laws enacted by the regime of Bashir to segregate citizens on the basis of religion and sex. In other words, the political declaration has made the TMC succumb to the will and demand of the Sudanese people to establish civilian transitional institutions. The management of this transition period requires both legitimacy and conducive security environment that can be only provided by FFC and TMC respectively. With this agreement innocent lives can be spared, the sacrifices and agony sustained by protesters since the beginning of the uprising can be ameliorated and daily life can return to normalcy. One would say the agreement is a win-win and the Sudanese have the right to celebrate.

Reasons to be Cautious

But while there are reasons to celebrate, there are also reasons to be cautious about the power-sharing agreement and political declaration. The TMC has been changing its position over the power-sharing agreement; particularly the transitional legislative assembly, and this raises serious concerns. This makes some analysts doubt whether TMC is genuine in transferring powers to the civilians. Besides this concern of the real intention of the TMC, there are other concerns including some unresolved transitional issues, the possibility of new power calculus and dynamics that may emerge to undermine the agreement and the uphill task of meeting the expectations of the Sudanese people and addressing the structural problems that triggered the uprising.

Hemedti may rebel and wage a new coup during the transition; particularly if the findings of the national investigation committee implicate him in the atrocities committed on 3rd June.

The real game changer during the transitional period will be Gen. Mohamed Hamdan Dagolo ‘Hemedti’. Recognizing his political, security and economic might, the agreement did not tamper with his forces, the Rapid Support Forces (RSF), that have been recognized as part of the national army. Alex De Waal describes Hemedti as the dominant player in Sudan’s political marketplace as he has economic power through gold; smuggling; and the funds earned from the troop deployment in Yemen, coercive power through his RSF and a shrewd politician who moves fast and seizes opportunities. With these sources of power, Hemedti may rebel and wage a new coup during the transition; particularly if the findings of the national investigation committee implicate him in the atrocities committed on 3rd June.

Although the FFC has undoubtedly shown unified leadership in dealing with the TMC, its signature of the political declaration with TMC on 17th July without getting the consent of armed groups and other parties tainted the unity among its members. Such unity may be fragile during the transition period as the narrow political interests and political competition will prevail over national interest of putting Sudan on the democratic path. If the FFC fails to form a national coalition umbrella organization of its members to contest the general elections, the remnants of the regime of Bashir may regroup and rebrand themselves under a new political party that may win the general elections since they have resources, external support, political system and experience that are in short supply with the FFC. If the general elections bring the political Islamists to power again, Sudan will again be put on a trajectory of agony, repression and suffering.

The transitional government will hardly mobilize locally the necessary resources to meet the basic needs and expectations of the people of Sudan. The regime of Bashir left a ramshackle economy after its leaders squandered and looted the national resources as revealed by profuse evidence of unprecedented corruption during the 30 years of misrule by the political Islamists. The gold resource that is now the main foreign exchange earner is monopolized and smuggled by armed militias including RSF of Hemedti. The agriculture that used to be the mainstay of Sudanese economy and provided employment for the overwhelming majority of rural Sudan has been neglected to the level that it can barely sustain rural livelihoods. The limited proceeds from the oil sector and fees on the oil export of South Sudan will hardly pay the wage bill of civil servants. Yet, people have high expectations from their civilian transitional government and may be disappointed if their technocratic government fails to deliver the basic services and live up to their expectations.

The real safeguard to the survival of the implementation of the 5th July Agreement and political declaration is the unwavering determination of the people of Sudan to put an end to the 30 years of Islamic regime by establishing a civilian transitional government. Although there might be temptations for the military to forge coups, the Sudanese people will be vigilant to quell any military takeover.

Sudan has an opportunity to genuinely address the grievances of the peripheries and to embrace diversity as a virtue.

Another reason for optimism is that if the civilian technocratic transitional government is provided with necessary resources and conducive political environment, it may deliver not only the basic services; it will also lay a solid foundation for putting Sudan on the path of stability and sustainable and inclusive economic growth. As the IGAD and AU have mediated the power-sharing agreement, political declaration and constitutional declaration with support from the international community, these organizations will provide the necessary guarantees. Importantly, if the technocratic transitional government comes up with a reasonable plan for the recovery of Sudanese economy, the Gulf countries, some Islamic countries, the European Union, China, and Troika (US, UK and Norway) will be willing to support and finance such a plan.

Last but not least, Sudan has an opportunity to genuinely address the grievances of the peripheries and to embrace diversity as a virtue and to move away from the exclusive Arabo-Islamic identity that threatens its territorial integrity. Paradoxically, Hemedti who has been accused of committing atrocities in Darfur seems to be opportunistically championing the agenda of the periphery. In order to strengthen his powerbase that is increasingly been challenged by the dominant centre and northern elites, Hemedti is likely to forge a new alliance with the armed groups by supporting their demands in the power-sharing agreement.