A tweet landed a global brand in a clash of politics and cultural demands. 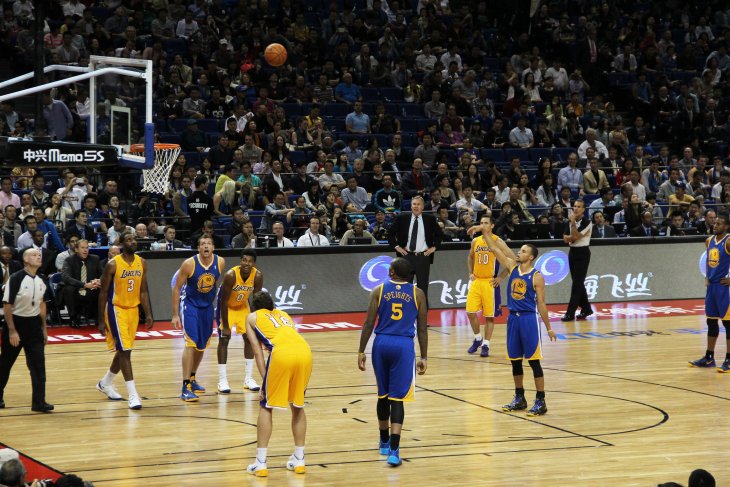 The Lakers play the Golden State Warriors in a 2013 NBA Global Games match in China. Photo: kpang21 CC via Flickr

It was a tough week for U.S. companies doing business in China. Tiffany canceled an ad campaign because the model had a hand over her right eye, prompting critics in China to complain it looked like she was supporting pro-democracy protesters in Hong Kong.

Blizzard Activision banned an esports player for one year for expressing support for Hong Kong — and also fired the announcers who interviewed the video game champ. Apple banned pro-democracy singers from selling on Hong Kong iTunes.

The National Basketball Association (NBA) got into the worst trouble of all. After Houston Rockets General Manager Daryl Morey tweeted — and quickly deleted — a message of support for Hong Kong, NBA Commissioner Adam Silver issued contradictory statements defending the NBA’s stance to Americans and apologizing to the Chinese.

The state-run China Central Television rejected the peace offering, saying Morey had no “right to freedom of expression” on the issue, and suspended their NBA broadcasts. Pundits and politicians left, right and center attacked the NBA.

What’s going on, exactly? It’s easy to condemn firms for meek apologies — and to criticize the NBA and others as willing tools of the Chinese regime, “submitting to authoritarianism” to make a buck. However, our research suggests even when companies want to support global democracy and human rights, they find it much harder than anticipated and trap themselves in unenviable choices.

Companies were supposed to spread human rights and democracy

For the past two decades, developed country governments, the United Nations and multilateral institutions have encouraged multinational businesses to play a bigger role in peace, human rights and development. They argued business is a key stakeholder in fragile countries and participation in governance and human rights is a ‘win-win’ way for firms to build social capital with minimal risk.

The United Nations and other global multinational organizations sought to institutionalize support for these principles, creating networks such as the U.N. Global Compact, Principles for Responsible Investment and the Voluntary Principles on Security and Human Rights to institutionalize the support. Activist shareholders joined the chorus, demanding companies not only make profits, but also act as socially responsible moral entities.

Many firms bought into this language, demonstrating a commitment to corporate social responsibility by doing good deeds in developing countries with poor governance and conflict risk. Hard-pressed policymakers in those countries welcomed the help in promoting peacebuilding, human rights and democracy.

Companies could potentially fill the gaps where governments could not, spreading human rights as they entered new markets. For example, by going into China, the NBA might not just entertain Chinese citizens, but also give them a glimpse of the benefits of democracy and civil liberties.

Our research has shown, time and again, how companies fail to live up to these lofty expectations. It’s not for lack of trying. Instead, companies find the problems governments want them to solve are incredibly hard — and companies themselves suffer the political fallout when they can’t get things right.

Firms often find the only choices they have left are bad ones. For example, the NBA can support freedom of expression — but then it will potentially breach its fiduciary duty to team owners by cutting itself out of the lucrative Chinese market. Alternatively, it can support the Chinese Communist Party’s efforts to control the narrative — but undercut everything the NBA brand claims to stand for.

When firms look for a “middle way” out of these problems, they often end up upsetting everyone. This was the case with Silver’s continued efforts to placate basketball players, fans, activists — and Beijing.

The problem of the ‘moral brand’

Analysts see it getting tougher still for companies that want to do business in both democracies and nondemocracies. Nearly all multinational companies have built their global brand around moral agency: They want consumers to believe the company does the right thing at every stage of its business and in every place it does business. Very different businesses such as Apple, Vans, Tiffany, Activision and the NBA don’t only sell products, but also an ideal of who the customers will become by enjoying their products.

All those companies have gotten into trouble over Hong Kong and China. More generally, companies find carefully crafted domestic identities clash against incompatible political and cultural demands from nondemocratic states and customers in foreign markets. Most firms were aware of the differences, but were caught off guard by how deeply these complex politics would affect their bottom line. Even businesses such as the NBA — with a unique product — are reluctant to offend a particular market. This fear keeps those businesses from making straightforward decisions guided by their stated corporate philosophies.

The bottom line? This clash of ideals and demands explains why companies can’t force social change upon recalcitrant regimes by themselves. Still, our research suggests firms can help solve even the most complex peace, human rights and democracy problems.

Companies are most likely to deliver benefits when the measures they take are concrete, focused on specific goals and build on existing corporate expertise. These measures are more likely to affect change when companies join in collective actions by the business community that complement international political campaigns.

The 1980s anti-apartheid movement in South Africa is a good example. The business community played a key — but subsidiary — role in ending apartheid. Businesses avoided direct criticism by joining a broader campaign, rather than by organizing their own activities.

Last week’s spotlight was on companies navigating the Hong Kong protests, but that’s not the only flash point for global business. Firms that try to do significant business in both democratic and nondemocratic markets are likely to see greater demands from their customers to be socially engaged, while investors push for ever more expansion into non-Western markets. Unless businesses act in parallel with governments that also support human rights and democracy, their vague corporate statements about supporting civil liberties and human rights will be exactly as inconsequential as they look at first glance.

Jason Miklian is a fellow at the Centre for Development and the Environment, University of Oslo and Senior Researcher, Peace Research Institute Oslo.

John E. Katsos, JD, is a business and peace researcher and lawyer based in the Middle East. Follow him on Twitter @jekatsos.

Benedicte Bull is a professor at the Centre for Development and the Environment, University of Oslo. Follow her on Twitter @BenedicteBull.