The Gulf States are looking for new allies in the Horn of Africa, in a battle for hegemony in the Middle East. With their deep pockets and big appetites these countries are using economic investments, new military bases, and strategic political alliances to change geopolitics on both sides of the Red Sea. 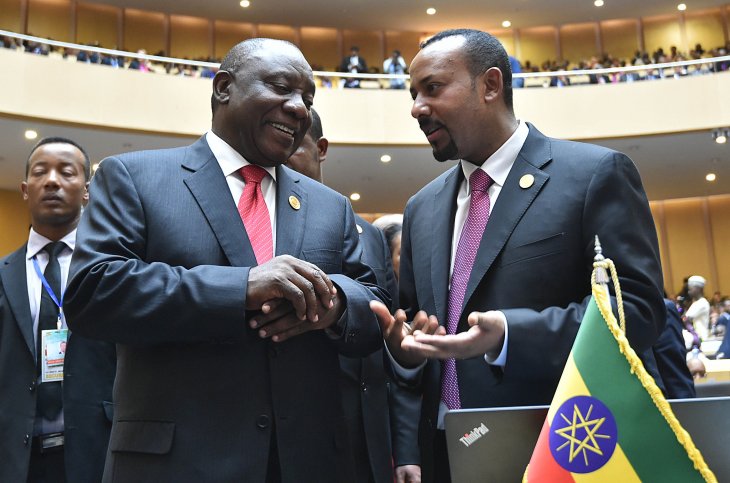 President Cyril Ramaphosa with Prime Minister of Ethiopia Abiy Ahmed during the opening session of the 32nd Ordinary Session of the Assembly of Heads of State and Government of the African Union, 2019. South African Government CC

This could mean new risks, which major actors haven’t seen coming. Getting all the countries around the Red Sea seated at one table in a dialogue about the way forward is needed. Nobel Peace Prize winner Abiy Ahmed has a unique opportunity to make it happen.

When Ahmed, Prime Minister of Ethiopia, accepts the Peace Prize December 10 at Oslo City hall, it is unlikely that Eritrea’s President Isaias Afewerki will be there. There is no doubt that Ahmed deserves the prize – he took the initiative and reached out an olive branch to his counterpart in a desire to end the conflict, frozen for the last almost 20 years.

But what is less known is the role of the United Arab Emirates, which helped facilitate the process. Saudi Arabia, a friend of the UAE, got the honor of hosting the signing ceremony for Eritrea and Ethiopia’s peace agreement.

Why? Both Gulf States are allies of Eritrea, whose strained relations with many stakeholders internationally are well known.

This illustrates a new trend in the Horn of Africa: the influence of the Gulf States, not only economically, but through political operations, military investments, and infrastructure. They are not traditional aid actors, despite their vast resources. They deal in money transfers and investments without strings attached. In return they expect political loyalty and access to resources like minerals, energy, harbors, arable land and other areas.

The starting point for this increasing involvement is primarily the geopolitical competition. The UAE and Saudi Arabia, supported by Egypt, are on one side, while Qatar and Iran, supported by Turkey, are on the other.

In addition, both groups see the Horn of Africa as an area with huge potential for economic growth. China sees it too and has gone full speed ahead with the Belt and Road initiative. The Gulf States don’t want to lose out.

Competition between these two camps in the Middle East mostly plays out in their own region, especially in the conflicts in Yemen, Libya, and Syria. The Muslim Brotherhood was one of the major players in the Arab Spring, supported by Qatar and its allies.

Pushback came from their competitors, the UAE and Saudi Arabia. Several countries tightened their grip, with more authoritarian regimes coming to power. Spring turned instead to winter, bringing war and conflict.

The Gulf States are being more aggressive than ever, while also trying to position themselves as mediators and negotiators.

Now this power struggle has made it to the Horn of Africa, across the Red Sea. The Gulf States have engaged for quite some time and nurtured their allies on the Horn: UAE and Saudi Arabia with Sudan (until president Bashir’s fall) and Eritrea; Qatar and Turkey deep in Somalia: UAE in Somaliland and Puntland, while Djibouti leans toward Saudi Arabia, although it’s open to overtures from Qatar.

Ethiopia has tried to strike a balance between the two sides. Sudan shifted from Iran to Saudi Arabia in 2015/16 when the economic crisis hit. In exchange for economic support one of their deliverables was providing thousands of soldiers to Saudi Arabia’s war in Yemen, many of them only teenagers. That is also why the country, together with the UAE, supported a counterrevolution in Sudan. It didn’t succeed.

The Gulf States are not only engaging with petrodollars, military bases, harbors and infrastructure investments to buy loyalty. They are also trying to prevent opponents from gaining a foothold in any corner of the region. In that sense they are being more aggressive than ever, while also trying to position themselves as mediators and negotiators.

In addition to the Ethiopia-Eritrea conflict, Saudi Arabia has had success with talks between Djibouti and Eritrea. Rather than going the more traditional route, and using lengthy negotiations to resolve fundamental conflicts, their approach is better described as transaction-based, not too dissimilar from a political market place. That said, the UAE and Saudi Arabia might be the only ones in a position to push Eritrea to follow through on the peace agreement with Ethiopia. TPLF’s position on the border is another important factor.

This is an intense power struggle characterized by deep pockets and large appetites.

There are also mounting fears in the African Union about the Gulf States’ activities, not only in the Horn, but in other areas of Africa as well. The Qatar-Gulf crisis in 2017 when Saudi-Arabia, the Emirates, Egypt and several other countries severed diplomatic relations with Qatar, divided the Gulf States, and accelerated their power struggle and respective expansion politics.

That expansion is now spreading over the whole content. But while most of that expansion is about competition over resources and economic influence, especially as it relates to China, the Horn of Africa is somewhat different. This is an intense power struggle characterized by deep pockets and large appetites. Their maneuvering is often based on short-term goals for strategic positioning. And the consequences can be significant.

Political leaders trying to stay in power might find useful allies in the wealthy Gulf States. Many observers are now concerned that the Gulf States’ involvement could lengthen or increase conflicts, rather than reducing them.

Why? The two competing camps in the Middle East see this as a zero-sum game. They push countries to choose a side, in some cases supporting opposition players and leading them to power, and at times even when local leadership does not want to participate in the game. That kind of influence is possible because of the power asymmetry between the Gulf States and the countries in the Horn of Africa. Such conditions do not spell political stability.

When compared to the Gulf States and Turkey, Western countries have not put up these types or volumes of aid or investments. OECD countries’ private sector are, for example, often hesitant to take that kind of risk with their investments. For individual Western donors it is not possible to give such large amounts of unconditional aid. The assistance comes with certain requirements – for good reason; they are held responsible by tax payers and national governments.

That makes Western aid and other traditional development contributions less attractive. Assistance from the Gulf is altogether different and doesn’t even have to be reported.

Asleep at the Wheel

The Horn of Africa and the Red Sea are in constant flux; the situation is highly dynamic. We saw this unfolding in Sudan, where local military allies of the UAE and Saudi Arabia were trying to keep their power and control and were given the green light to crush the protests. They didn’t succeed. The involvement of the Gulf was counterproductive and a new transitional government in Khartoum was formed. They may, however, still engage to retain the status quo, as they have done elsewhere. The question is whether they will continue to engage in retaining old allies, or whether Sudan could serve as a lesson, taking a different approach.

Someone, and in this case the Gulf, will fill the void soon unless Western and African actors become more pro-active.

Whatever the case may be, the international community, and especially the Western countries, have been asleep at the wheel. This is the new reality. If a strategy isn’t developed soon, the new foreign policies of the Gulf States could yield serious consequences. Although competition and rivalry might meet short-term political and commercial goals, they can also affect the long-term stability of a highly vulnerable regions. It could even hit the Gulf States themselves, just on the other side of the strait.

The UN has just appointed a Special Envoy to deal with the Horn of Africa, Parfait Onanga, expected also deal with some of the Red Sea-issues, while the UK has appointed a Special Envoy for the Red Sea and the Horn of Africa, Julian Reilly. That’s a start. The Americans, however, have had a hands-off policy in relation to these issues for too long. This has geopolitical implications. Someone, and in this case the Gulf, will fill the void soon unless Western and African actors become more pro-active.

A first step would be to form regional forums where Gulf States and countries in the Horn of Africa can discuss common solutions to several of the challenges they face in the region. Multilateral action is often the best solution to avoid countries only looking out for their own interests.

Nobel Peace Prize laureate Abiy Ahmed has more than enough challenges at home. Still, taking the initiative to discuss the formation of a regional forum for countries on both sides of the Red Sea would be an excellent first step following on the Peace Prize.

This piece originally appeared in Norwegian in Bistandsaktuelt. You can read it here.
Translation: Indigo Trigg-Hauger / PRIO

Mentioning the Red Sea Region without Israel, Jordan, and Palestine will not do justice to the Blog. Israel has a big say vis-a-vis its eternal security which has a big stake in the affairs of the Red Sea. Unless SA and UAE have a tacit understanding with Israel, Geopolitically speaking that is. The US has subcontracted the region to the Oil rich Gulf States, with the unfortunate family feud with Qatar. Otherwise the article is dead on vis-a-vis the Gulf ambition towards the Red Sea. We will wait and see how The Horn Region will dance to the new tune. The one nation that is close to Israel’s strategy, and doing it very quietly, is Eritrea. That is why they act with disdain when it comes to regional collaboration. The State of Eritrea prefers quite and behind closed door bi-lateral relations as it is safer to deny any involvement if things goes against their expectations. You can see how cautious they are with their deal with Abiy. They have their own underlining strategy only Isayas and his small circle knows.
Ethiopia’s achilles heel is, it is now officially landlocked, and will never have a big influence as it wishes towards the Red Sea, that the Dulles Doctrine is Dead, since Eritrea claimed the ultimate prize of the Red Sea coastline in 1991.
We are in for exciting time and I am not optimistic and I agree with the article that “Spring has turned to Winter”.