The Norwegian-registered vessel Ocean Viking, operated by Médecins Sans Frontières, has recently been at the centre of a debate that has become dominated by one assumption: that search-and-rescue (SAR) operations are encouraging people to attempt to cross the Mediterranean 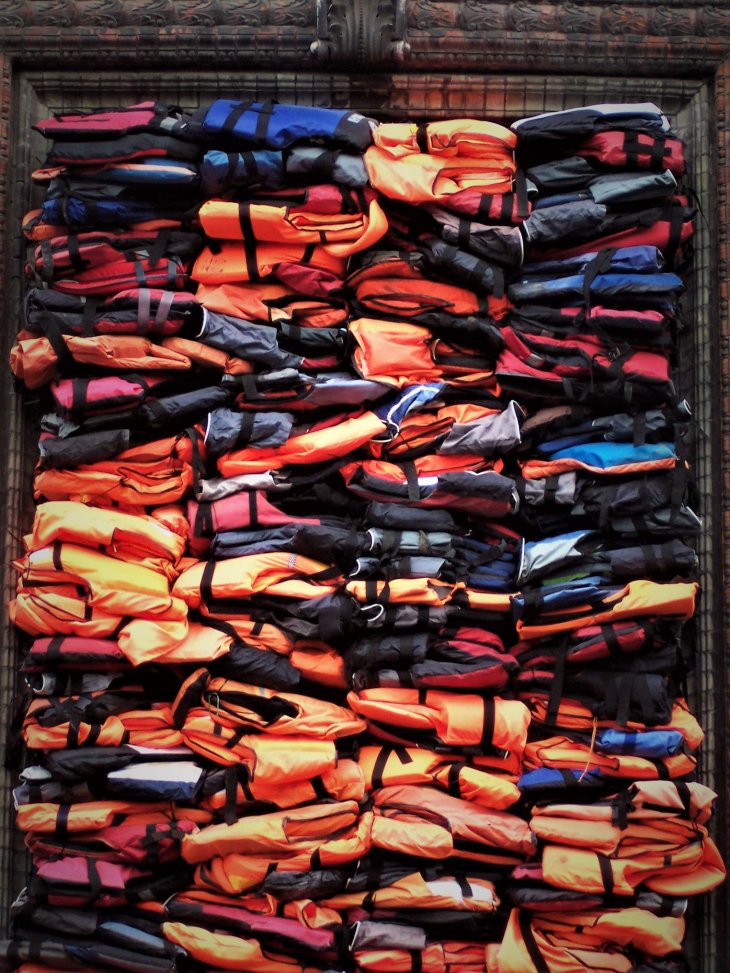 Ai Weiwei’s Soleil Levant – migrants’ lifejackets. This artwork in Copenhagen, by renowned Chinese artist and dissident Ai Weiwei, is made up of actual life jackets used by migrants crossing to the Greek island of Lesbos in search of safety or a better life in Europe. Photo: TeaMeister via Flickr.

The logic is problematic for several reasons, and I will try to address some of them: 1) the statistics suggest otherwise; 2) it ignores the wider picture – that a range of complex factors drive people to flee their homes, with some heading towards the Mediterranean; and 3) the theory is being used to legitimize non-rescue of boats in distress.

The logic has a name, the pull factor – in other words, that SAR operations contribute to “pull” more people to attempt the crossing. The power of this idea lies partly in how it provides a simple and apparently clear-cut explanation for a complex problem — a problem that we otherwise have a hard time understanding, and even harder time addressing. It is also powerful because it is difficult to refute: it is hard to know exactly what makes people decide to embark on this dangerous sea crossing, and there are probably as many reasons as there are refugees and other migrants.

In 2004, Erna Solberg, then Minister of Local Government and Regional Development, argued against a local initiative in Trondheim, which sought to provide food and accommodation to asylum seekers lacking refugee status. Solberg claimed that the initiative would “in practice mean unfettered immigration by people from the Horn of Africa”. Today the idea that any measure intended to ensure a minimum level of subsistence for refugees or other migrants will help “pull” more people in the same direction pervades European policy on migration, from Greece and France to Norway.

The number of refugees and other migrants who attempted to make the crossing had already begun to rise before the operation started, and even while Mare Nostrum was saving tens of thousands of lives at sea, the numbers continued to rise.

The pull factor and SAR operations

In particular, the legacy of Italy’s Operation Mare Nostrum has served to boost the pull-factor theory about SAR missions in the Mediterranean. Mare Nostrum was established in response to a major shipwreck off Lampedusa in October 2013, which was described by high-ranking EU politicians and the Italian president as a “shame” for Europe. Mare Nostrum was run by the Italian navy as a “military-humanitarian” operation. The number of refugees and other migrants who attempted to make the crossing had already begun to rise before the operation started, and even while Mare Nostrum was saving tens of thousands of lives at sea, the numbers continued to rise.

Critics quickly concluded that the increase was linked to the presence of the SAR operation, and that Mare Nostrum was directly and indirectly encouraging more people to make the crossing. This allegation, which was seen at the time as controversial, has nonetheless become almost conventional wisdom in today’s policy-making.

What do the numbers tell us?

There is in fact a duty, enshrined in the international law of the sea, to provide assistance to vessels in distress and take the rescued to a safe harbour.

Another, still ongoing, study conducted by Matteo Villa at ISPI in Milan, is examining the number of migrants leaving Libya in 2019 compared with the availability of SAR vessels on the actual dates the migrants’ boats left shore. The findings show that the likelihood of boats leaving Libya is not affected by the availability of SAR vessels, but rather by wind and weather conditions. Figures from the IOM and UNHCR show that so far this year, on average, 31 migrants leave shore on days when SAR vessels are operating, against 41 migrants on days with no SAR vessels.

Even while these figures sow doubt about the existence of any direct link, it is important to point out that the theory itself, assuming that the availability of x number of SAR vessels affects the number of people attempting the sea crossing, is built on a problematic premise. The thinking is based on a very narrow perspective, which views SAR vessels as a unique factor in a world where the availability of more or fewer SAR vessels is the sole factor influencing an apparently inexhaustible number of migrants ready to attempt the crossing. The wider picture, with its multiple factors that either hinder migration or make it possible or necessary for people to leave their homes, is too complex to understand and too difficult to do anything about. This line of thinking posits NGOs’ activities as the simple explanation for an otherwise incomprehensible situation, and thereby also the factor that needs to be addressed in order to resolve the situation.

Hindering the operations of SAR vessels will not save the lives of more migrants.

The main problem with this hypothesis however is not only that it appears to be unfounded and based on a narrow perspective, but that it is being used to legitimize both the closed ports and an active policy of not coming to the rescue of vessels in distress. There is in fact a duty, enshrined in the international law of the sea, to provide assistance to vessels in distress and take the rescued to a safe harbour.

Regardless of one’s political standing, it is no easy matter to argue against saving lives at sea. That is also why many of those advancing this argument. are trying to prove that SAR operations will “entice” more people to attempt the crossing, and thereby putting more migrants at greater risk. As such, the policy of non-rescue is presented as a policy that protects more people from drowning.

But hindering the operations of SAR vessels will not save the lives of more migrants, and it will also not address the complex causes of displacement and migration.