Seen in hindsight: was Norwegian democracy actually in peril for a few days in mid-March 2020?

This piece is part of our blog series Beyond the COVID Curve.
COVID-19 has quickly changed everything from our daily routines, to the policies of governments, to the fortunes of the global economy. How will it continue to shape society and the conditions for peace and conflict globally in the near future and long after we manage to get the virus under control? 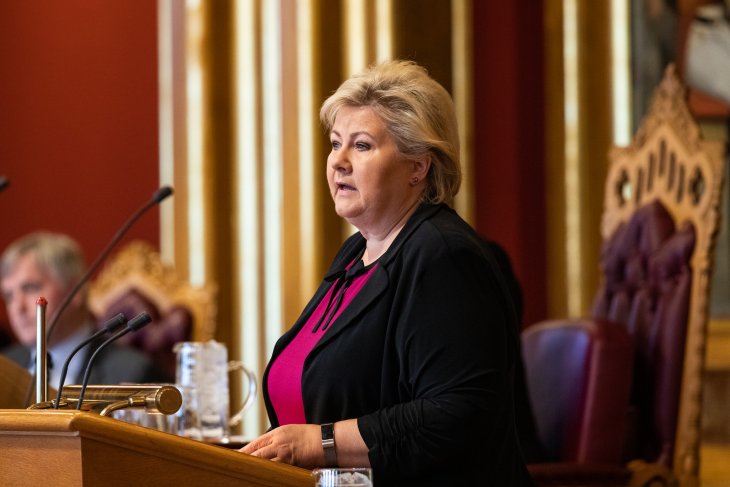 “This was not an attempted coup d’état, but an attempt to get everyday life to function.”

This is what Prime Minister Erna Solberg said last weekend, on 21 March, after a majority in the Storting (the Norwegian Parliament) had approved an amended version of the Enabling Act (also referred to as the Corona Act) proposed by the government in order to deal with the coronavirus crisis.

The amendments came after a very rapid consultation process, during which leading law professors argued that the original draft of the Act provided extremely wide powers to the government, upset the balance of power between the government and the Storting, and challenged democratic ground rules. Certain opposition parties and media outlets also expressed serious concerns, both about the process and the contents of the Act. The amendments imposed restrictions on the powers granted to the government, and the duration of the Act was fixed to last for only one month. A united Storting, including the government parties, backed the revised Act, and the government seems happy with the outcome. The short-lived “crisis” over the “Coronavirus Act” was called off.

Seen in hindsight, was Norwegian democracy actually in peril for a few days in mid-March 2020?

This undermining of rules and norms happens so gradually that it goes barely noticed (an analogy is that of the frog who doesn’t notice that the water is heating up until it gets boiled).

Norwegian democracy has been rock solid for several decades, and often appears in various rankings as among the strongest in the world. But even established democracies are not necessarily immune to erosion, as has become clear over recent decades. Relatively established democracies, such as those in Hungary, Brazil, Poland and India have experienced a drift towards authoritarianism, and even the very well-established democracy in the United States is under pressure.

Typically, the erosion of modern democracies is pushed forward by leaders who were themselves elected in free elections. Elected presidents or prime ministers challenge principles and institutions, such as media freedom, the legal system, and parliament, one after another, in “drip-drip fashion”, gradually concentrating power in their own hands. Often this undermining of rules and norms happens so gradually that it goes barely noticed (an analogy is that of the frog who doesn’t notice that the water is heating up until it gets boiled).

Even with the benefit of hindsight, it is difficult to identify the specific point at which a country tipped over into dictatorship. It is even more difficult for opposition politicians, the media and the general public – observing in real time – to call out the dismantling of a democracy, resulting in a lack of mass demonstrations in that democracy’s defence. When the alarm is finally triggered, it may be too late. Accordingly it is dangerous to give ground on apparently insignificant democratic principles, even in a rock-solid system such as Norway’s, and even when the leaders who started the process were never intending to execute a coup d’état.

informal democratic norms are deeply rooted within both the Norwegian population and members of political elites.

Although democracies may be vulnerable to even minor and apparently innocent changes in the law, we were never concerned about Erna Solberg executing a coup d’état and seizing power as a dictator. The formal institutions that secure Norwegian democracy are strong, but perhaps even more importantly, informal democratic norms are deeply rooted within both the Norwegian population and members of political elites.

Namely, democracies start to decay when political elites accept that democratic norms can be challenged or set aside for the elites’ own benefit. Democracies are not merely based on constitutions that specify the balance of powers between parliament, the executive and the judiciary; they are also based on informal norms and rules governing what is acceptable and unacceptable behaviour. It is of little help to have a clause protecting freedom of expression in the constitution, if politicians nonetheless tolerate the beating of journalists in practice. Formal rules are only as good as the informal norms regarding compliance. Similarly, passing legislation to deal with a crisis is not dangerous when combined with Norwegian politicians’ great respect for democratic ground rules.

Future political elites may have anti-democratic intentions, even though this is not true of the authorities today.

The amendment of the Enabling Act demonstrated the robustness of Norwegian democracy. The amendments took account of comments by various parties and from the consultation comments and related public debate (even though it went rather quickly this time!). The government and opposition complied with democratic ground rules, negotiated and finally arrived at a consensus. Norwegians should be proud of their political system (and politicians).

But – even though a coup d’état was always an unrealistic outcome – we, along with the law professors and certain opposition parties, were concerned with the specific proposals and their potential unintended long-term consequences. A genuine concern is the precedent the Act could have set for measures to shift power towards the government and away from the Storting, and how the Act could be used as a model by future governments (with more sinister intentions than fighting a virus) in circumstances that are difficult to predict.

Future political elites may have anti-democratic intentions, even though this is not true of the authorities today.

There is yet another aspect of the current situation that is particularly “interesting” for people researching democracy. Periods of crisis are dangerous for political systems as well. Both democracies and dictatorships succumb far more often in times of crisis (during economic crises, for example).

The coronavirus crisis is the mother of all crises

One important reason is that opportunist national leaders, throughout history, have used crises and natural disasters as windows of opportunity to tighten their grasp on power. Crisis laws are often part of this process. They are presented as a temporary and exceptional measure – power must be concentrated in the hands of the leader and the government to combat the crisis effectively – but often the law is still in place long after the crisis has abated. A study of 60 democracies shows that the introduction of crisis legislation is associated with a significantly increased chance of democratic collapse. An analysis of 180 countries also shows that regime changes engineered by leaders themselves, such as self-coups in democracies, occur far more often in times of crisis.

The coronavirus crisis is the mother of all crises: it combines a frightening external threat – in this case of a life-and-death nature – that requires extreme government interventions into people’s lives, with economic crisis that will bring widespread unemployment in its wake. Although democracy in Norway will not be threatened, the coronavirus crisis is already being used by national leaders in other countries and political systems to undermine civili liberties, cancel elections, concentrate decision-making power in the hands of leaders, and shift regimes in a more authoritarian direction.

In Israel, Benjamin Netanyahu has closed down the courts, among other things, on the pretext of the coronavirus crisis, after having lost an election and with a looming court case against him. In Hungary, which has long been moving towards greater authoritarianism, President Orban proposed on 21 March to extend the existing crisis-related powers, and the army has been assigned to guard 140 state-owned businesses. These government interventions are raising fears of further moves towards authoritarianism. History tells us that we can expect several more such examples ahead.

If democracies such as Norway appear ineffective, while countries such as Singapore and China are seen as finding effective, robust solutions to the coronavirus problem, many people might view authoritarian systems as more attractive.

At the same time, managing the impending catastrophe is also important for the future of democracy. There is a legitimate need for state intervention, and strong measures will be necessary to ensure not only the well-being of democratic citizens, but also the legitimacy of democratic systems. We do not want to observe a scenario where Norwegian politicians are incapable of acting to deal with the crisis and its health-related and economic challenges. It is also true that extraordinary measures can strengthen democracy in the longer term – so long as the design and dosage of these measures are appropriate, and they are used with the utmost caution. A functioning democracy is dependent on popular legitimacy, and in these times, that legitimacy is inextricably linked to how well the state deals with the coronavirus crisis.

If democracies such as Norway appear ineffective, while countries such as Singapore and China are seen as finding effective, robust solutions to the coronavirus problem, many people might view authoritarian systems as more attractive. What importance does democracy have, many people might think, if thousands are dying every single day and hundreds of thousands are losing their jobs? Accordingly, it is important, also for democracy, that the government implements powerful measures.

Now that the Enabling Act has been amended, we hope that we will be able to combat the coronavirus pandemic knowing that Norway did not give up on democratic principles, even in a time of crisis. Despite everything, we will have to continue living with these principles long after the coronavirus has left Norwegian soil.