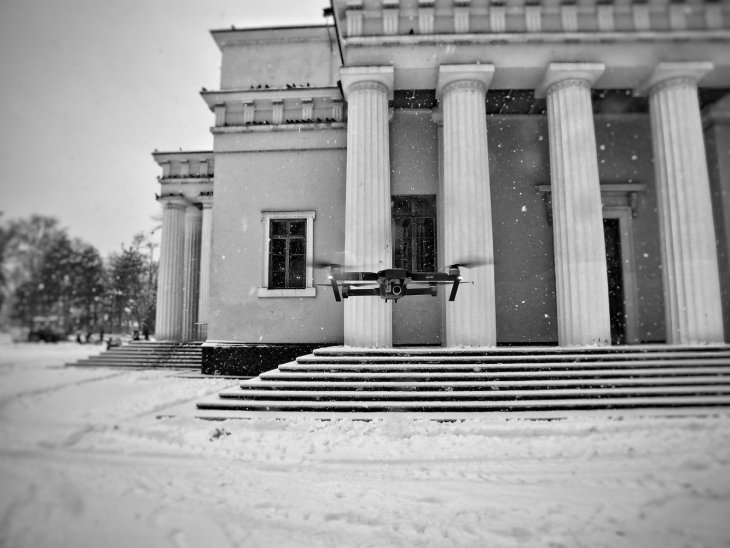 The fight against the COVID-19 pandemic has mobilized national and international resources of all types, from funding of medical research to financial rescue plans, and has led to widespread state of emergency declarations. While the approaches adopted all over the world have differed from one country to another, an underlying trend connecting many of the measures implemented during the last weeks has been the growing importance of technological solutions. Essential assets in time of crisis, emerging technologies such as drones, Artificial intelligence (AI), robots, perform specific tasks (geolocate people to impose lockdowns, for example) and generate data for specific purposes, for example to create patterns of dispersion of the contagion to anticipate future outbreaks.

The fast-growing deployment of drones during the current pandemic is an illustration of how exceptional events can act as technology development and employment accelerators.

This increase utilization of drones to execute a broad range of tasks is a natural outcome of the growing availability and sophistication of this technology. Previous use of these devices to address global health issues, such as the Ebola and Zika outbreaks, has generated knowledge and led to some best practices that are now facilitating drone usage. This has triggered widespread hype and optimism about its capacity to fight pandemics. Yet, the current trend opens up myriad questions that require further scrutiny. In this context, journalists and analysts have generated hype around drones, which have emerged as a tool with extensive applications for all kinds of actors, from law enforcement agents to first responders and humanitarian personnel. They are used to relieve the current and future stress on resources in the emergency services, to deliver emergency food and medicine to vulnerable people, to collect imagery and video to help monitor various situations, and to disinfect large urban areas. Drones are being equipped with speakers to convey direct messages about social distancing or lockdown measures. They can reach either people in urban areas or in more isolated locations such as rural areas, or that are otherwise more difficult to communicate with, for example homeless people in remote areas. Drones are also equipped with cameras to collect images that are subsequently released to shame people for their non-observance of lockdown rules.

The fast-growing deployment of drones during the current pandemic is an illustration of how exceptional events can act as technology development and employment accelerators. Technological development refers to the speeding of R&D processes that lead to new technologies, while the employment of existing technologies is multilayered and is manifested in different ways. In the case of drones, this means that drones can be repurposed (i.e. that they can perform new tasks), that new pilots can be recruited and trained to operate a larger number of drones, and that more tasks can be ascribed to drones already possessed by different actors. Importantly, in crisis scenarios, and especially under a declared state of emergency, the alleviation of regulatory requirements may also occur. In the case of drones, the rules for circulation in civilian airspace can be alleviated and their integration facilitated or even hastened by the respective regulatory authorities (the Federal Aviation Administration in the US, the European Aviation Safety Agency in the European Union, together with national regulatory authorities in the member states). The Italian Civil Aviation Authority (ENAC), for example, approved a time-limited authorization for local police to use drones to monitor the movements of citizens during the coronavirus pandemic. Hence, acceleration of processes surrounding technology development and employment may lead to new and/or extensive uses of a particular technology which pushes further the limit of public acceptance.

Furthermore, a related but fundamentally different phenomenon is the expansion of a system or technology beyond its original purposes – what is often defined as function creep. This phenomenon has been identified in the literatures on Science and Technology Studies and innovation studies and recent research has done conceptual work on the distinction function creep and function expansion.

In a forthcoming article in Law, Innovation and Technology, Bert-Jaap Koops argues that “what is distinctive of function creep (as opposed to simply function expansion or innovation) is that it denotes some qualitative change in a system’s function that causes concern not only because of the change itself, but also because the change is insufficiently acknowledged as being transformative and in need of discussion.”

Do some of the current drone usages exhibit function creep, or are we witnessing a mere function expansion? This issue is open for debate, and answering the question would require further monitoring of the near-future adaptation of drone-technology to the needs of a pandemic-like situation. In the current scenario, the most intriguing applications of drone technology have perhaps been the coupling of different thermal and sensorial technologies that allow the monitoring of the temperatures of population. Drones are therefore being used as multi-task platforms where different technologies can be employed to combine different sensorial tasks, from vision to touch, which in turn further challenges the relation between the human and the machine.

The widespread use of the state of emergency creates the conditions that could lead to the normalization of exceptionalism once the emergency is over.

Over the last year, we have seen that no matter the purpose (leisure, commercial, professional, humanitarian), the employment of drones raises privacy and data protection issues. These concerns are not just in terms of contemporary, real-time surveillance, but also – perhaps more importantly – because the use of drones generate massive amounts of new data that needs to be managed according to the specific legal requirements. Some of the countries and regions that are using drones as part of the pandemic response (EU countries or the state of the California, for example) have the world’s strictest data protection regulations, such as the General Data Protection Regulation in Europe, or the California Consumer Privacy Act. These regulations will certainly been infringed on during the pandemic under the states of emergency. Here we refer to gathering of video and imagery data, private temperature and other biometric databases, and geolocation data, all of which can be cross-examined as metadata. This opens a series of ethical and legal issues that our societies will need to address.

Additionally, the proliferation of drones in the civilian airspace will increase the likelihood of accidents and may also facilitate criminal activity. Accidents may happen due to failure of technology, through collisions in the airspace, or by breakdown in the delivery of cargo, for example. Criminal activity can happen through many forms, in particular by hacking of drones used by law enforcement or humanitarian actors, by using drones to deliver contraband amidst a drone-populated airspace, and by using drones to conduct some sort of attack.

This situation further complicates the already difficult employment of counter-drone technology (C-UAS). As highlighted in the recent comprehensive PRIO report Countering the Drone Threat, that some of us co-authored with Arthur Holland Michel, C-UAS technology is often not fully effective, and those wishing to use the technology face a range of hurdles with respect to legality, coordination, planning, and safety. Current legal frameworks are lagging behind technological developments, and therefore many of the available technological C-UAS solutions cannot be used in civilian settings due to legal restrictions. It can be expected that as drones populate the airspace, these challenges will grow.

All over the world, states are responding to the challenges of the COVID-19 pandemic by invoking the state of emergency – generally characterized by an expansion of the state power, allowing it to perform actions and adopt exceptional measures that it could not carry out in times of normal politics. States of emergency allow the adoption of extraordinary political, financial and administrative resources, as well as authorize “new” security practices. These resources and practices can be instrumentalized to advance political agendas, like we have seen in Hungary. They can also destabilize societies, in particular the ones already exposed to some form of conflict, such as Israel, where the controversy over the use of counter-terrorism tools for corona-related surveillance has led to a constitutional crisis.

The widespread use of the state of emergency creates the conditions that could lead to the normalization of exceptionalism once the emergency is over. This is particularly relevant considering that current security practices are being mediated through technology – from metadata analysis to geolocation tracking and facial recognition screening – in a context of growing presence of technology as a mediator in our lives. As a platform where some of these technological tools are coupled, drones are a big part of this debate.

Conclusion – rally around the tech?

While approaches differ from one country to another, we can observe a central convergence around the broad use of emerging technologies to tackle the health emergency. The extensive use and multiple applications of drones in the current pandemic have raised several challenges highlighted in this piece: technology acceleration with a faster integration of drones in the airspace, function creep which opens and normalizes new potentialities, societal concerns regarding privacy/data protection, security and safety issues, as well as the potential abuse of the state of emergency with the normalization of exceptionalism to pursue other objectives than the fight of the current crisis.

How will the public react to this increased usage of drones? Could it trigger a growing societal acceptance of this technology due the exceptional times we are in, in the logic of a “rally around the tech” effect? Or will it be understood as part of an increasingly invasive (ab)use of technology to monitor every step of our lives? These questions will be answered over the next months and years, as the general perception of emergency slowly vanishes and we observe the digital footprint it left in our societies.

Bruno Oliveira Martins is a senior researcher at the Peace Research Institute, where he coordinates the Security Research Group and leads the project “States of Emergency as Disruptive Pandemic Politics”

Chantal Lavallée is Assistant Professor of International Studies at Royal Military College Saint-Jean in Canada and a former Marie Skłodowska-Curie Fellow (2017-2019) at the Institute for European Studies of the Vrije Universiteit Brussel (VUB) with the project “The European Commission in the Drone Community: A New Cooperation Area in the Making”

Andrea Silkoset is coordinator of the Norwegian Centre for Humanitarian Studies and a researcher at the Peace Research Institute Oslo. She is co-author of the report Countering the Drone Threat: Implications of C-UAS Technology for Norway in an EU and NATO Context (with Bruno Oliveira Martins and Arthur Holland Michel)