People around the world are grappling to understand events in the United States at the moment regarding the current wave of protest and protest policing.  A few events readily come to mind in this comparison but the one that probably carries the greatest resonance would be the uprisings/disturbances/riots that followed the assassination of Martin Luther King Jr. (hereafter MLK).  Are these events similar though? 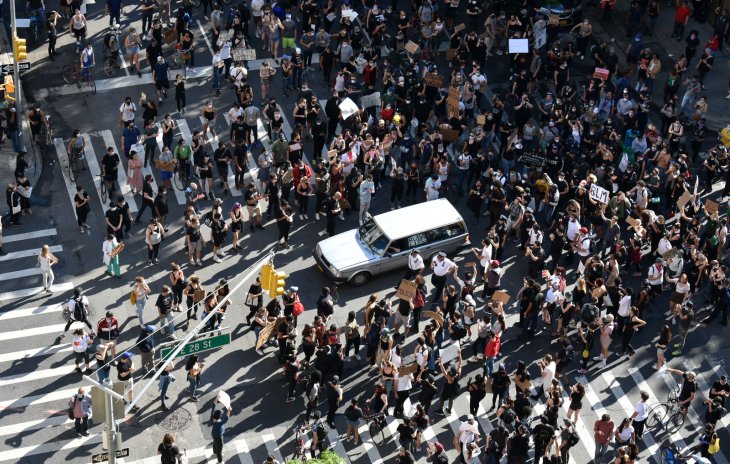 Following the assassination of MLK in May 1968, over 120 U.S. cities erupted in a wave of social unrest unprecedented even in the already turbulent 1960s America. At the surface, the causes of today’s protest and those over 50 years ago are unnervingly similar. While George Floyd was no MLK, his death at the hands of the police seems to highlight a long history of state-sponsored persecution, discrimination and violence directed against African Americans. It also reveals an equally long history of rebellion, resistance and protest about this treatment.

While scholarship on 2020 has yet to be undertaken, it seems clear that investigations will strongly be focused on how police act as a catalyst for violence.

The evaluation of this intersection between police violence and black protest has been limited. For example, the Kerner Commission, directed by President Lyndon Johnson to investigate the causes of the 1967 riots, argued that employment, segregation, migration, poverty, frustration, lack of political representation and police brutality were the prime motivators of unrest. Despite these conclusions however after the report was released, social scientists set out to test many of the commission’s findings – leaving out the role played by the police. Exemplifying this omission is the series of path-breaking studies by the sociologist Seymour Spilerman. Within this work it was revealed that employment, migration and poverty were better predictors of riots when viewed not in isolation but in combination with competition for scarce resources among groups. Police violence was not even considered.

In many ways, this orientation makes sense. The 1960s riots occurred at the tail end of a massive migration of African Americans escaping economic hardship and violence in the South. Between 1910 and 1970, more than six million African Americans moved from the South and into the North and West. Recently arrived migrants were willing to work for less than Northern whites and blacks. According to David Cunningham, along with new cheap labor, the striking down of segregation opened up new job opportunities for blacks that were historically off limits, putting them into competition with whites.

Similarly, the structural backdrop noted above in 1968 is not dissimilar from the latest social unrest in the US in 2020. Under the imposed lockdown to reduce the spread of COVID-19, unemployment has soared to over 14%. Black workers are disproportionately affected, suffering a 17% unemployment rate compared to 14% for whites. Increasing unemployment heightens competition for limited safe and reliable employment. This competition may explain the difference in outcome between other recent killings of black men and women and the killing of George Floyd. Perhaps the most similar death to George Floyd is that of Eric Garner. Garner, killed in New York City after a police officer placed his arm around his neck and wrestled him to the ground, sparked nationwide protests. However, protests related to Eric Garner’s death or Michael Brown’s death or Alton Sterling’s death did not match the extent and severity of today’s protests, which have occurred in over 75 cities.

In cities across the U.S., peaceful protest has given way to more confrontational tactics after police has responded with aggressive tactics.

While scholarship on 2020 has yet to be undertaken, it seems clear that investigations will strongly be focused on how police act as a catalyst for violence. But how should we understand this influence?  Police by their very nature are the domestic arm by which authorities repress to control dissent. States use repressive action against their citizens in order to regulate/limit challenges that threaten the regime. Research by political scientists Steven C. Poe and Nate Tate suggests that in democracies, dissent leads to repression less often and at lower levels than in non-democracies. This said, Christian Davenport finds that democracies do repress dissent but they are more likely to engage in restrictions rather than physical violence. The impact of this repression on dissent is a matter of contention itself. State coercion/force might adversely impact a group’s resources and opportunity to organize prompting it to decrease behavioral challenges or, as in the case of recent protests in the US, repression can exacerbate dissent by generating new grievances and further spurring groups to respond by increasing their call to challenge the state. In cities across the U.S., peaceful protest has given way to more confrontational tactics after police have responded with aggressive tactics.

Protesting the excessive use of force within black and brown communities, police responded with more force that inflamed tensions. Research by Alex S. Vitale suggests that police are more likely to use force against protesters when the subject of the protest is police violence. In addition, police use violence against protesters of color more often than against white demonstrators. Interactions between a repressive militarized police force and protesters responding to and demanding an end to police brutality has escalated violence on the streets.

Research by Alex S. Vitale suggests that police are more likely to use force against protesters when the subject of the protest is police violence.

The lessons from 1968 have never been properly internalized. Disturbances broke out in Los Angeles in 1992, Ferguson in 2014, and Baltimore in 2015, to name a few. The costs of these are staggering. In Los Angeles alone, 63 people died and more than 2,000 were injured. Then comes the material losses. These are only the immediate effects however. Economist William Collins and Robert Margo suggest that the 1960s riots reduced the growth rate of housing values, one of the primary means of wealth, a full decade later. The detrimental effects were most severe for homes owned by African Americans.

Violent protests also alter voting behavior. According to Omar Wasow, violent protests that involve looting, risk triggering a backlash among white voters. Whether current protests result in white voters supporting law and order candidates remains to be seen. Until underlying problems are addressed in a sustained manner and a fundamental rethinking of policing is undertaken, the disturbances of 2020 might just result in another report like those following the 1919 Chicago riot, the 1935 and 1943 riots in Harlem, the 1965 riot in Watts, and the 1967 riots.