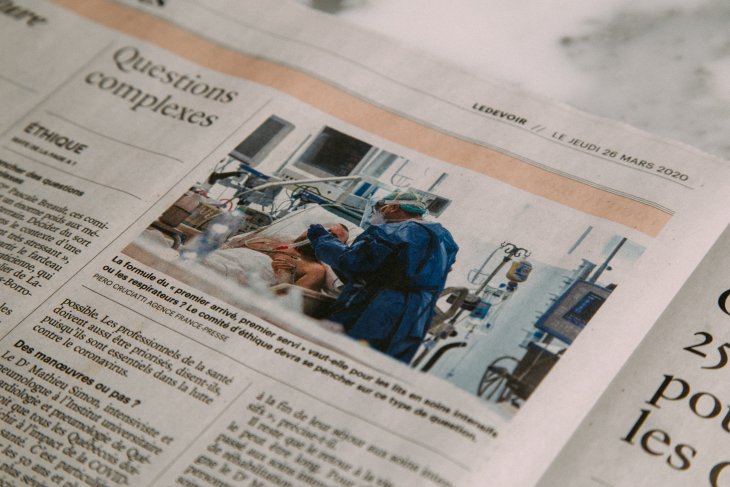 On April 1 the European External Action Service (EEA) released a report alleging China and Russia had carried out a coordinated disinformation campaign around the origin and the spread of COVID-19 to sway public opinion abroad and create divisions among EU members. The report claims that China and Russia are spreading targeted disinformation through their media channels and official statements. In a subsequent report released by the EEA China, Russia and Iran are accused of converging their narratives, collectively alluding that the virus is a Western bioweapon and spreading false information around public health efforts in the EU.

The global pandemic has amplified an ongoing debate about the role of disinformation in international politics. Some go as far as to claim that we are currently in the midst of a full-blown global information war. It is therefore worthwhile to take a sober look at the ways in which disinformation has been used both to control foreign and domestic audiences. Further, this blog post will briefly consider some of the collateral damages the widespread use of disinformation by states and state leaders has caused.

It is crucial to make a distinction here. A wide range of individuals peddle disinformation and conspiracy theories. However, state-supported use of information manipulation takes on a new dimension because it is more coordinated and frequently targeted towards a specific political goal. It is, therefore, using disinformation deliberately either to exploit social divisions abroad or to control public opinions at home.

The distribution of disinformation works through various channels. Statements by government officials often spread misleading information. Media networks like Russia Today or CCTV are active in many countries, command a significant viewership, and often serve as a mouthpiece for state leaders to mould the public discourse on a specific topic. False or misleading information is then further spread through social media channels which have not been able to stem the tide of fake news.

China has cleverly used this manipulation of information through various channels to obfuscate the origins of the virus. Chinese Foreign Ministry spokesman Zhao Lijian claimed on Twitter that the virus originated with US soldiers who have visited Wuhan for the world military games in late 2019. At the same time, the Chinese Communist Party (CCP) continuously insists on the successful curtailing of the spread of the virus through its strict lockdown measures.

With the US elections coming up in November this year it is easy to see why the government wants to distract from its own shortcomings.

This aggressive promotion of a narrative that is favourable for the CCP seems to be successful in many instances. The WHO has praised Chinese efforts to contain the virus and has mainly remained quiet regarding the possibility of media suppression at the beginning of the outbreak and continuous claims that the official numbers from China are likely doctored. Similarly, the EU has recently bent to Chinese pressure not to release a report that would condemn the CCPs effort to conduct a global campaign of disinformation.

Disinformation linked to Russia is also significant. State-controlled media outlets generally promote a narrative that minimises problems in the country while exaggerating the failures in response to the virus abroad. The regional branches of Russian state media are oftentimes more blatant in its approaches to disinformation. RT-Deutsch, the German branch of Russia Today, has repeatedly peddled misleading information about the severity of the virus and the lockdown measures of the German government.

The US president and cabinet members appear to work with a similar playbook. Donald Trump and Secretary of Defense Mike Pompeo have both promoted the idea that the coronavirus originated from the Wuhan Institute of Virology. Despite the lack of clear evidence for these claims, they were maintained for weeks. Only recently, Pompeo started to back away from this position.

Disinformation as a political instrument

Although instances of disinformation both concerning COVID-19 and other topics are widespread among states like Russia, China and the US, it is hard to discern their impact. Nonetheless, EU agencies have maintained that pro-Russian and Chinese disinformation has been repeatedly used to create subversive effects within Western countries.

While the threat of targeted disruption by foreign powers through disinformation might be overblown, disinformation still plays a vital role as a political tool.

Indeed, governments in China and Russia have had a long history of media manipulation to achieve foreign policy goals. Russia’s predecessor, the Soviet Union, routinely employed so-called active measures to create coercive effects among their adversaries. China has enshrined the use of media manipulation as a cost-effective tool for aggressive foreign policy within its infamous “Three Warfares”.

Insofar as targeted disinformation has been successful in creating or even enhancing distrust in public in the wake of COVID-19 is questionable. As for Germany, the governing CDU has significantly improved in polling numbers compared to the last election in 2017 despite significant internal and external efforts to discredit the government’s response to the outbreak.

To what degree precisely disinformation is able to influence foreign audiences is almost impossible to discern. Despite large amounts of data that is being collected on the prevalence of fake new and disinformation, thus far little evidence has been produced that could convincingly establish disinformation as a useful tool for targeted coercive foreign policy.

While the effectiveness of disinformation as a foreign policy tool remains unclear, there are some major incentives for state leaders to use these means domestically. Large scale lockdowns and economic recessions have made it increasingly important for the political leadership around the world to maintain stability and legitimise potentially unpopular actions. This is especially the case in authoritarian countries with limited media freedoms.

After a bungled response to the outbreak of the virus in Wuhan and an initial outcry within Chinese social media after the silencing of Li Wenliang, the CCP had a vested interest in creating a narrative that blamed the local authorities and foreign nationals for the spread of the virus and highlighted the successful and heroic response of the central government.

Similarly, attempts at maintaining stability in the face of the global pandemic using information manipulation are observable in Russia. On July 1 the country will vote on reforms that could significantly prolong Vladimir Putin’s presidency. Maintaining a positive narrative around the government’s response to the crisis is likely an attempt to guarantee favourable results.

The repeated efforts by Donald Trump to blame China, Europe or the WHO while downplaying apparent negligence in his initial response to outbreaks can be interpreted in a similar vein. With the US elections coming up in November this year it is easy to see why the government wants to distract from its own shortcomings.

There are real victims of this politicised use of disinformation and the manipulation of opinions and narratives. Anti-Asian racism has increased dramatically in the wake of the pandemic, a trend which is fuelled by repeated anti-Chinese narrative coming from US officials. The US government legitimised its withdrawal of funding from the WHO by blaming the organisation for allegedly kowtowing to the Chinese government and not warning the international community early enough about the potential dangers of the virus.

In China, efforts to blame foreigners, especially Africans, for the spread of the virus has led to mass evictions and denial of essential services to a significant number of African expatriates in the country. African leaders and diplomats have harshly criticised these expressions of xenophobia, leading to a frosty relationship with many of Chinas diplomatic and trade partners on the African continent.

While the threat of targeted disruption by foreign powers through disinformation might be overblown, disinformation still plays a vital role as a political tool. COVID-19 has put a spotlight on many instances where governments have attempted to steer the narrative around the pandemic both internally and externally. It remains important not only to highlight obvious cases of disinformation and propaganda but also not to forget the genuine damage governments can cause by using these tools.