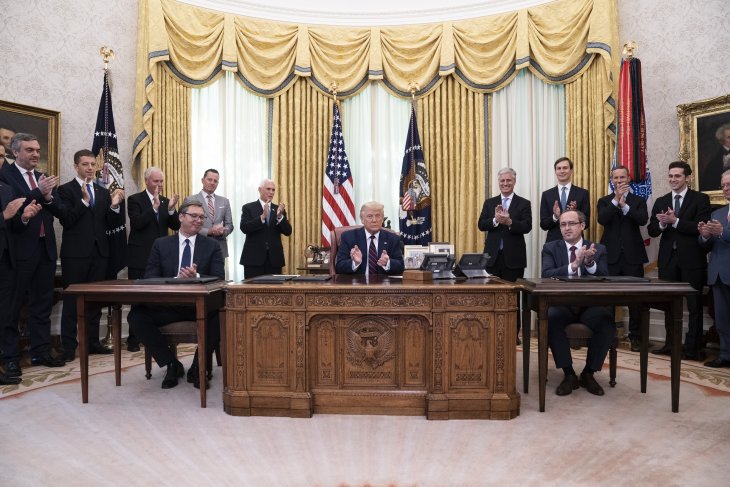 On September 4, Kosovo and Serbia signed a deal on ‘Economic Normalization’ in the White House. Not unlike Trump’s other foreign policy endeavors, the deal was ridiculed by pundits. It also received political backlash from the international community. The EU, which has facilitated the dialog between Belgrade and Pristina for the past nine years, was quick to warn the parties against parts of the deal. Trump has attained a new piece of paper to wave in front of his electorate as a ‘historic’ foreign policy achievement, but the question is: how much is the deal worth for improving relations between Kosovo and Serbia?

The dialog between Belgrade and Pristina has been facilitated by the EU since 2011. Several agreements have been reached, most notably the Brussels Agreement on ‘normalization of relations’ in 2013. However, the EU has failed at getting the two parties to implement the agreements. The implementation problem is often attributed to the ‘constructive ambiguity’ employed in the negotiations. The ambiguity refers to both the legal status and the content of the agreements, and it has enabled Belgrade and Pristina to produce and reproduce the agreements in differing and contradictory ways when away from the negotiation table in Brussels. The tensions between Belgrade and Pristina have only continued and they reached a peak in November of 2018, when Pristina imposed 100 percent tariffs on Serbian imports as a response to Belgrade’s derecognition campaign against Kosovo. Since then, the dialog has essentially stalled.

The EU has also lost credibility as a facilitator over the past decade. The carrot waved in front of Belgrade and Pristina at the start of the dialog – EU membership – is now far off due to the EU’s internal disagreements over enlargement. For Serbia, it is still possible to envision EU membership, but the slowdown of the EU’s enlargement process threatens to push Belgrade further towards the East and Russia. For Kosovo, expecting EU membership in the foreseeable future is unrealistic given the divide within the EU over Kosovo’s status. There are still five EU states that do not recognize Kosovo’s independence: Spain, Slovakia, Cyprus, Romania, and Greece. Kosovo also continues to be isolated from the rest of Europe through visa requirements that the EU has yet to liberalize, despite Kosovo meeting the conditions for liberalization.

Given the stalemate in the dialog, US involvement could have been a welcomed development. However, when the Trump administration got involved earlier this year, its heavy-handed approach towards Kosovo’s newly elected government put question marks around the administration’s reasons for getting involved. It seemed as though the administration was more interested in a foreign policy win for a reelection campaign than making real progress in the dialog. Richard Grenell, Trump’s Special Envoy for the Kosovo-Serbia dialog, put pressure on Kosovo’s government to remove tariffs on Serbian imports. In response, Kosovo’s government suggested a partial removal, dependent upon Serbia halting its derecognition campaign. Eager to get the parties to Washington, the administration went on to threaten Kosovo with the loss of US support if the tariffs were not completely removed. In fear of losing the support of their most powerful ally, Kosovo’s politicians crumbled and toppled the government through a no-confidence vote at the end of March.

When Trump’s Kosovo-Serbia deal saw the light of day last week, it proved that Trump was primarily concerned with the symbolic value of a deal rather than real progress in the relationship between the two parties. During the signing ceremony he declared that «There was a lot of fighting and now there’s a lot of love,” as if a complex conflict had been solved with the stroke of a pen. After the signing ceremony he was also quick to tweet how the deal was a step forward for peace in the Middle East, by portraying Kosovo as an Islamic and Arab country that had agreed to establish diplomatic relations with Israel. A factually absurd claim given that Kosovo is a secular country located in South-Eastern Europe. The deal also scored political points for Trump’s ‘friend’, Israeli PM Netanyahu, with Kosovo and Serbia pledging to designate Hezbollah in its entirety as a terrorist organization, and Serbia agreeing to move its embassy from Tel Aviv to Jerusalem in July of next year.

The disproportionality between Serbia’s and Kosovo’s gains also goes to question the intentions of the Trump administration. Serbian gains were made directly at the expense of jeopardizing Kosovo’s independence, an independence that the US was among the first to recognize. One of the most notable points in the deal was the pledge to share control over Gazivode/Ujmani Lake, a source of water and energy supply which lies predominantly within Kosovo’s borders. The deal also included a one-year moratorium on Kosovo seeking new membership into international organizations, and Pristina agreed to sign on to the ‘mini-Schengen zone’, which Serbia will gain from economically. Kosovo’s only substantial gain was recognition from Israel.

How sustainable is the deal?

The deal signed on Friday is a peculiar one, to say the least. Two slightly different versions have been signed by Kosovo’s PM Avdullah Hoti and Serbia’s President Aleksandar Vucic, technically making for deals signed between each party and the US. This puts the legality of the deal in question. Ahead of their meeting with the EU on Monday, Hoti and Vucic issued a joint statement, appearing to already downplay the binding nature of the deal.

Furthermore, the deal does not include a plan for implementation, and it is hard to imagine compliance on Belgrade’s part given the strong ties to Russia. The implementation of an agreement that entails concessions to Kosovo will be perceived by the Kremlin as Serbian betrayal and a win for the West. For Vucic, who has consolidated his power in Serbia by playing nice with both the East and the West, that is not a viable option. Belgrade appears to already be backpaddling from the deal, with media quoting a source close to Vucic saying that Serbia will not move its embassy to Jerusalem should Israel go through with the recognition of Kosovo. Serbia’s balancing act between the East and West could be witnessed just this past week where Serbia has gone from signing the deal, to joining Russian and Belarusian forces for a military exercise amid anti-Lukashenko protests.

In Kosovo, the deal is also unlikely to be implemented as the Hoti government has little public support. The government was formed following the no-confidence vote against the popular Kurti government in March and has faced accusations of breaching the constitution. Before the meeting in Washington, PM Hoti boldly claimed that mutual recognition would be on the table. Failing to deliver on that promise, as well as making concessions that threaten to hurt Kosovo’s independence, has put his government at risk. Should the Hoti government survive, it will still be difficult to get the 2/3 of votes in parliament which are needed to ratify the deal since the opposition makes up more than 1/3 of the seats.

The deal signed last Friday already seems to be falling apart. If the goal is to produce a sustainable deal between Kosovo and Serbia, then this is the wrong timing. What is needed to reach a comprehensive deal that will improve the relationship between Kosovo and Serbia is a government in Pristina with strong public support, and a Belgrade with a clear commitment towards the West and a willingness to discuss the elephant in the room: mutual recognition. There is also a need for a credible facilitator, but neither the current US administration nor the EU have proved to be that. The current character of the parties and the people involved make for little optimism. However, with a new US administration at the helm the situation could change for the better.

America could have done more for us Albanians. Let’s be honest, Russia is the enemy of America. Serbia is the son of Russia. Serbia and Russia are by heart and soul against America. Us Albanians on the other hand are the most pro American people on this part of Europe. Trump should have told Serbia that you have to fully recognise Kosovo and never lobby against its independence because that’s what Serbia is doing. As for us Albanians, well what can we do to make Serbia happy? According to them the only thing that makes them happy is was and will be us not existing. That’s why they raged war on us. As for Israel, I think they should have recognised us back in 2008. We would have build an embassy in Jerusalem right away.

[…] Balkans, he made his desire to win the Peace Prize clear. However, experts say the accord between Serbia and Kosovo didn’t actually do anything, and the “Abraham Accords” signed by Israel with the UAE and Bahrain normalized and formalized […]