The people of Bosnia and Herzegovina are governed by three presidents, 14 prime ministers, 180 ministers, and 700 members of parliament (who sit in 14 different parliaments). 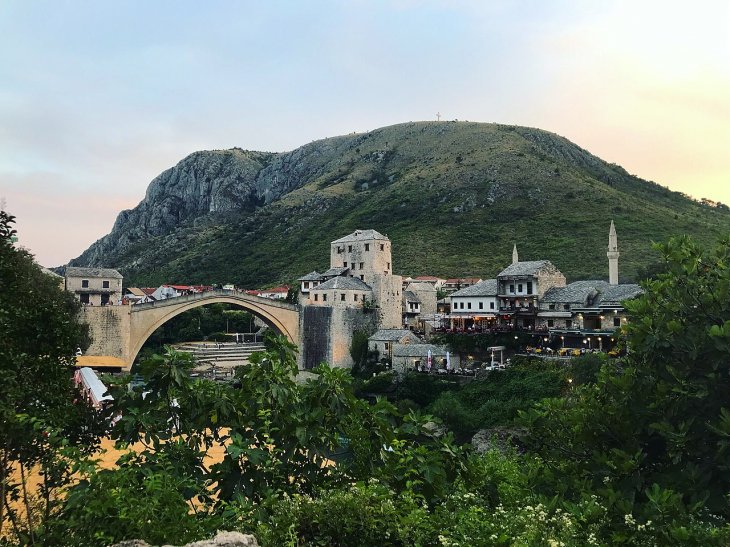 The beautiful and symbolic bridge in the capital Mostar. Wikimedia Commons.

A ping on my phone last fall told me that she was now a widow. The message was from my Bosnian friend in Sarajevo. Her husband had lost his struggle after a long illness. She sits alone in her apartment with her dog, her memories and responsibility for two children fast approaching adulthood.

They will not benefit from any dependents’ pension or war pension. In addition, due to the pandemic, the organization she worked for has lost its funding. They have had to close down, so now she  has also lost her income.

When I call her on Zoom to ask how she is doing, she sheds brave tears and wonders how she will manage. She has worked in an organization focused on peace and reconciliation since the Bosnian War, but no one will pay for this work any longer.

The war ended long ago. Now the priority is to combat the pandemic. Why should one do anything to support more efforts to promote peace and reconciliation in Bosnia and Herzegovina today? It is now 25 years since the signing of the Dayton Peace Accords.

Male decision-making with no women involved

At the end of November this year, a meeting was organized at the UN to mark this anniversary. Twenty-five years ago, the parties to the conflict met in Dayton, Ohio. They conferred there for several weeks and reached an agreement to end the fighting in Bosnia and Herzegovina, which had continued for nearly four years.

These mighty male decision-makers also laid plans for the reconstruction of a devastated society. No women were involved in these talks, even though conflict related sexual violence had been an integral part of the ethnic warfare.

The following month, on 14 December 1995, to much international media fanfare, the parties met again in Paris to sign the Dayton Accords. The signatories were the most prominent political leaders of the Serbs, Croats and Bosniaks, together with leaders from the United States, Russia, the United Kingdom, Germany and France.

A new state was to be built on the remains of a former Yugoslav republic. A quarter of a century later, the commemoration at the UN did not go quite as planned.

Commemoration ended in a quarrel

What was intended to be an informed dialogue about peace and development in Bosnia and Herzegovina, turned into a heated quarrel between Milorad Dodik, the Bosian Serb member of the country’s Presidency, and Valentin Inzko, who oversees the implementation of the Dayton Accords on behalf of the international community. Inzko is High Representative of the international community for Bosnia and Herzegovina.

He accused Dodik of disrupting the implementation of the Accords and of denying war crimes. In particular, Inzko criticized the erection of a memorial to the war criminal Radovan Karadžić in Republika Srpska, the mainly Serb entity within Bosnia and Herzegovina. In 2016, Karadžić was sentenced by the International Criminal Tribunal for the former Yugoslavia (ICTY) to 40 years’ imprisonment for genocide, crimes against humanity and war crimes.

Threatened to break up the country

Inzko was also very critical of Dodik’s failure to acknowledge the Srebrenica genocide. Dodik responded by calling Inzko a monster. He continued by claiming that the international community in Bosnia and Herzegovina was only interested in exacting revenge on the Bosnian Serbs and Bosnian Croats, and took the side of the Bosniaks (the Bosnian Muslims).

He went on to threaten, as he has done many times before, to seek to integrate Republika Srpska into the neighbouring country of Serbia, which would bring about the disintegration of the Bosnian state.

The episode was reported by the website balkaninsight.com in its news summary for 25 November. The article concluded by saying that the events on the international stage at the UN are familiar tactics from Bosnia and Herzegovina, and they bear witness to an enduring instability in what is often described as a ‘failed’ Bosnian state.

Everything is governed by ethnicity

The war that lasted from 1992 to 1995 resulted in a peace that established one of the world’s most complex national constitutions. Firstly, the small country is divided in two – a mainly Bosnian Serb entity (Republika Srpska) and a Federation of Bosnia and Herzegovina (mainly Bosniaks and Croats).

In addition, the country’s approximately three million inhabitants are governed by three presidents, 14 prime ministers, 180 ministers and 700 members of parliament, who sit in 14 different parliaments.

This structure is intended to hinder any one ethnic group from overriding the others. But at the same time, it has resulted in too much being determined by ethnic affiliation to the major population groups: Bosniaks, Serbs and Croats.

A person seeking political office must declare membership of one or other of these groups. Mixed or hyphenated identities are not accepted. Politicians must ‘self-define’ as either Bosniac, Serb or Croat. This has the additional effect of excluding members of the Roma and Jewish minorities from any formal political influence.

A unsuccessful attempt to promote fraternization

This situation exists just beyond the EU’s external border. The French president and others have expressed concern about where this could lead. Corruption is widespread and unemployment is among the highest in Europe.

Given the bloated apparatus of government, it is easy to imagine where people can find jobs, and there are few incentives to reform one of the world’s most complicated systems of government. The alternative to a political position could easily be a rapid move to unemployment. Those who might want to look at renegotiating the Dayton Accords see the writing on the wall.

In this situation, a new generation have grown up after the Accords were signed. They have been told different versions of the war. They have had different curricula at their respective schools, and often children from different ethnic groups have not attended the same school at the same time. They have been kept apart from each other.

Although there have been countless attempts to encourage fraternization, reconciliation and dialogue, politics based on ethnicity that caused the war, have also shaped the peace. The foundations that have been put in place to foster mutual mistrust are unshakeable.

Both forgotten and overruled

The Bosnian War was a trauma for the Balkans, Europe and the UN, and for belief in the idea that judicial proceedings can lead to reconciliation. This does not mean that a lasting peace in Bosnia and Herzegovina is impossible, but the country’s current situation is not sustainable.

Efforts to promote peace and reconciliation must not be overshadowed by efforts to combat the pandemic. The Dayton Accords must be renegotiated. Who should do this is unknown. Inertia characterized the international response to the war for many years, and the same applies to the cold peace that has taken root.

Paradoxically, many Bosnians feels themselves to be simultaneously forgotten by, and at the mercy of, external political forces. This is confusing and irreconcilable.

One thing is clear, however. My friend needs a job, and Bosnia and Herzegovina needs her work. Her children need to believe that they can stay in the country following their father’s death, and that they can have a future there.

The  quarrel and disagreementat the UN that marred the 25th anniversary of the Peace Accords does not warrant a better future for any of them. The fear that the cold peace could heat up into a war is ever present.