As part of PRIO’s contribution to the 10 year commemoration of 22 of July, the author challenges perceptions of justice after mass atrocity that equates justice with law and criminal justice with closure. 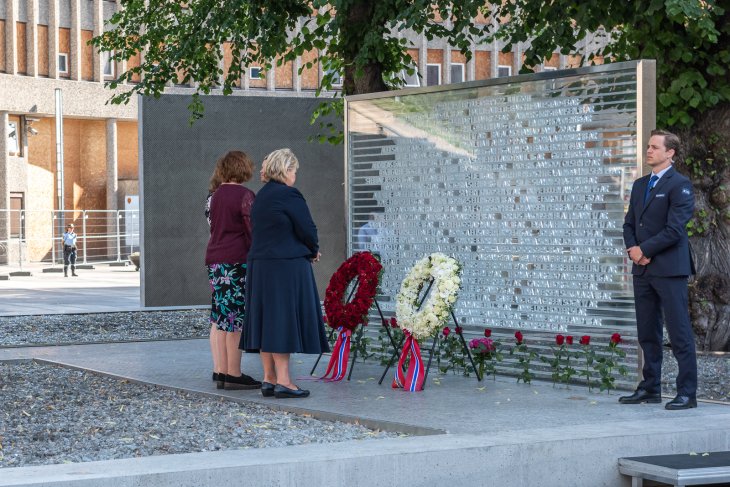 After mass violence, “the promised exercise of legal justice — of justice by trial and law — has become civilization’s most appropriate and most essential, most ultimately meaningful response to the violence that wounds it” the U.S literary critic Shoshana Felman argued in her book The Juridical Unconscious.

This holds true, too, after terrorism. While the men charged with 9/11 are infamously still awaiting trial at Guantanamo, and the British prosecution services have failed to secure convictions for the 7/7 suicide bombings in London, a Spanish court found 21 men guilty of the 2004 Madrid attacks in 2007. In what is set to be the largest French trial to date, the French prosecuting authorities have finally succeeded in getting the terrorists behind the 2015 Bataclan attacks on trial. The proceedings are expected to last until May 2022.

In Norway, Anders Behring Breivik was found guilty of the 2011 terror attacks in Oslo and Utøya a year after the bomb and shooting spree that killed 77 and wounded hundreds more. The comparatively speedy trial was early on assessed as successful not only in terms of the goals of criminal justice (retribution, prevention, upholding rule of law), but also for its contribution to ‘closure in society.’

As the ten-year mark for the terror attacks in Norway approached this summer, the public debate about the aftermath of terror revealed that this perception of closure is highly contested: What was understood and experienced as closure by (parts of) the public, was all but a(n important) milestone for many victims.

What was understood … as closure by … the public, was all but a … milestone for many victims.

Concerned about their  physical security and the continuous rightwing surge in public debate throughout the past decade, several survivors of the Utøya massacre impatiently called for the public and for politicians across the political spectrum to take a stand against the political mindset and ideas out of which Breivik drew inspiration and rationalization for the terror attacks. In apparent contrast to this frustration, Geir Lippestad, lead counsel for Anders Behring Breivik (ABB) during his trial in 2012, wrote a controversial op-ed contending that “The score was finally settled in court.”

In this blog post, I draw on my research on war crimes and conflict-related institutional responses to mass harm,  to reflect on the power of criminal justice – and the power of beliefs in criminal justice – to provide settlement after atrocity. I discuss the limits of criminal justice particularly in terms of collective responsibilities and dangerous political ideologies shared by a wider constituency, and its potential contribution to reconciliation pressures that increases after someone is found guilty in a court of law.

The Inherent Limitations of Criminal Justice

As Jørgen Watne Frydnes, manager at Utøya, pointedly remarks, as a nation, we are privileged in the sense that we have little experience with handling terrorism of this scale. Thus, questions of how a society can respond to the harms caused by political mass violence, rebuild social trust, and care for victims and survivors can (and should) be informed by the experiences of those with more violent histories. The first among these lessons, for all societies emerging from politically motivated mass violence, is that law, let alone criminal justice, is not enough.

… for all societies emerging from politically motivated mass violence, [the] law, let alone criminal justice, is not enough.

On fieldwork in Bosnia and Herzegovina in 2015, I met ‘M’ – a survivor of the 1992-95 wars in the former Yugoslavia. M lost several family members during the war and explained how he did not experience any sense relief or prospects for reconciliation after convictions in The Hague – not even after convictions that concerned crimes committed against his own family.

The fact that distant judges acknowledged the crimes in a court far away was meager consolation, or no consolation at all, in his everyday life. Those who supported and directly committed the attacks and executions went about with their everyday activities – and had done so for 20 years. As M said,

They walk around like they own the town streets and plazas, living as if the war is their story of suffering, when it was us who were robbed of everything (…)

We need to be recognized here, where we live, we need those who are responsible and those who accepted or contributed to our killing and torture, to give us that recognition and acknowledge their role.

Because in this situation, it is not possible to be reconciled – neither with the past nor for the future. There is no justice here.

With the limitations of criminal justice in mind, M explained, there is still hope for a life and an everyday existence that feel safe. But it is hard to feel safe in a community where the ideological violence is denied, relativized, or justified, where few or none critically reflects on the fact that violence, extremist politics, and xenophobia were allowed to emerge and were rationalized, encouraged, and legitimized in one’s own living room or backyard.

… hostile ideologies do not emerge in political, social and societal vacuums …

There are many differences between the post-conflict community that M lived in, and the Norwegian context after 22/7. But the desperate appeal for politicians to take responsibility for the public debate and for communities and individuals to reflect honestly and openly acknowledge that hostile ideologies do not emerge in political, social and societal vacuums, has its parallels in the Norwegian setting, too.

The limitations of criminal justice does not deny it’s actual contribution – but it begs the question of what it is reasonable to expect from criminal law.

Criminal justice is expected to provide some form of catharsis, which helps both victims and society to end a painful chapter and move on …

After the Second World War, Felman (2002: 107) explains, “[w]e needed trials (…) to bring a conscious closure to the trauma of the war, to separate ourselves from the atrocities and to restrict, to demarcate and draw a boundary around, a suffering that seemed both unending and unbearable. Law is a discipline of limits and of consciousness. We needed limits to be able both to close the case and to enclose it in the past.”

Law distances atrocity, contains it — indeed, makes it seem manageable — by leaving it in, and judging it as, the past. Criminal justice is expected to provide some form of catharsis, which helps both victims and society to end a painful chapter and move on, healed.

Yet, by investing this type of aspiration in criminal justice, we forget that  it is a response focused on individual guilt, and that this individualization (necessary as it may be) inevitably “is at odds with the collective character of atrocity.”

In the Norwegian context, the claim that the trial finally settled the score, strikes a chord with those who isolate Breivik’s terror as the acts of a lone wolf whose political manifesto must be read as a mad man’s illusions, and not as arguments with any relevant or sizeable political constituency. 22 July becomes partly insanity, partly natural disaster.

Yet, in Norway and abroad, the ideological ideas underpinning the 22 of July attacks have been defended, supported, rationalized, and – terrifyingly – acted upon. In the run-up to the general election in September 2021, Labor party youths and local politicians for the Labor party were violently attacked in several communities in Norway – by attackers who stated that Breivik should have done a better job.

… criminal justice … does not – and cannot – address collective responsibility

While thorough, victim-oriented criminal justice processes can become important milestones in healing and grieving processes, for many like M, referred to above, criminal justice is not enough. It does not – and cannot – address collective responsibility. That is a responsibility entire communities share to prevent the political ideologies from claiming future victims and scare politically engaged youth and adults from participating in public debates.

Conceptions of Justice and Reconciliation Pressures

Increasingly, scholars take ‘issue with how transitional justice processes are incrementally framed in legal discourse.’ As we respond to terror and political violence, and their aftermath, it is important to not by default allow legal lingo to assert experience, nor the definitions or meaning or content of justice and healing.

‘Justice,’ for one, is a concept often equated with judicial justice, and in particular, criminal justice. If we explicitly open up for justice to be something outside of criminal law, or even beyond law as such, our understanding of what institutional and societal responses to terrorism, mass violence, and loss could look like may radically change.

The dominant (and limited) understanding of justice – conceived in judicial and criminal law terms – may not only produce disappointment with the perceived promises of law. Importantly, its portrayal as a mechanism that provide closure, may also produce what I call reconciliation pressure.

That is, an expectation from society, that it is now time to move on. But while individual criminal responsibility is settled in court, a court does not end suffering, it does not automatically relegate pain or trauma to the past, nor is the finding of guilt the equivalent of an expiration date for the ideological foundation that terrorists such as ABB act upon.

… a court does not end suffering, it does not automatically relegate pain or trauma to the past…

After mass atrocities, after brutal evil and utter cruelty, all cannot be reconciled. As Amèry puts it in At the minds limit (1980: 72), he ‘recognized that a forgiving and forgetting induced by social pressure is immoral.’ He believed it was anti-moral of society to expect and push for the forgiveness of the Holocaust.

Amèry forcefully opposed what he described as the biological healing that time brought with it, because what he had seen and experienced should not be allowed to be alleviated or even get a fragment of acceptance – not through forgiveness, not through reconciliation, nor through time.

His reflections serve as a poignant reminder to take seriously the societal and political pressure for reconciliation that only increases with time, also in the Norwegian context. As criminal justice has become a preferred institutional response to terrorism, the recognition that follows a conviction in court, and the articulation, communication and symbolic condemnation of violence carry merit. Yet, it also produces a veil of seeming closure – individualizing guilt and by that, limiting the collective’s need to reflect on their possible contributions to a worldview and ideology that made terrorism possible.

While no measures can undo violence, nor replace or compensate lives lost, a society’s willingness to honestly reflect on how terrorists could grow out of its midst, is a decent place to continue the process that started – as opposed to ended – with the criminal trial and judgment of Breivik.

It may not – nor should it be expected to – result in healing, closure, or reconciliation – but such recognition can also be a valuable component of this thing we refer to as ‘justice’ after mass violence and harm.

Anette Bringedal Houge is a Postdoctoral researcher at the Institute of Health and Society at the Faculty of Medicine, University of Oslo. She participates in the UiO/PRIO project LAW22JULY: RIPPLES: Rights, Institutions, Procedures, Participation, Litigation: Embedding Security