July 22, 2011, at 15.25, a bomb placed inside a white van exploded next to the H-bloc (‘Høyblokka’) where the prime minister’s office was located. Eight people were killed in the blast: most were government employees, and some were passing by. More than 200 people were injured. Additionally, the explosion caused enormous material damage. Later that day, 69 people, most of them children and youth, were executed at Utøya. Many more were severely wounded. 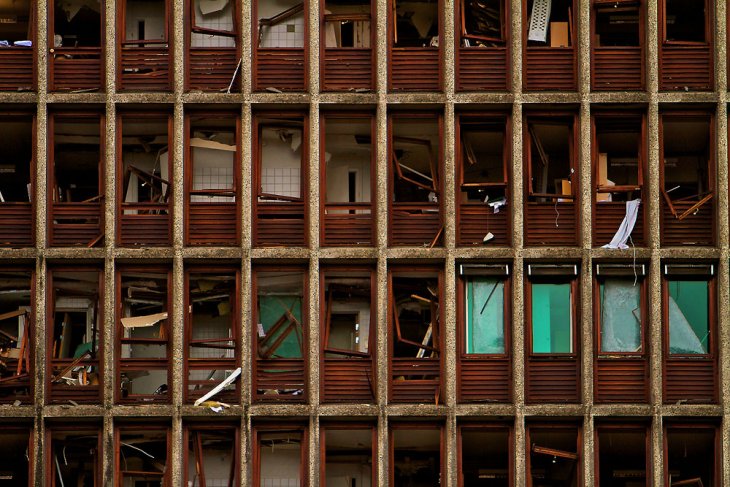 In the decade following this attack, Norway has struggled to come to grips with the political implications of the attack: 22 July was not a natural disaster.

The dominant framing of the violence as an ‘attack against us all’ to some extent obscured that the attack represented a targeted assassination of the members of the Labor Party’s Youth wing, AUF. By 2021, through difficult, tenuous, and delayed conversations, political actors across the political spectrum and the public have slowly moved towards a reckoning of 22 July as an act of political terrorism.

However, this leaves us with the question of how we should think about the bombing of the government quarters, which inescapably represents an attack against democracy and the rule of law.

What happened there, how has the nation and the state handled the reconstruction process – and what should the new quarters become?

Here we make the argument that since 2011, security has become not only the undisputable key rationale for how the reconstruction of the Norwegian government complex should play out: security has become the singular logic underpinning and driving this reconstruction process. This narrow and exclusionary focus has considerable costs, which are insufficiently recognized in contemporary conversations about the impact of the 22 July attack on Norwegian society and democracy.

The path towards securitization

During the ten years that have passed since the bombing attack, the reconstruction process has been the target of massive and continuous criticism from many different actors. Architects have suggested that the new government quarters “may be outdated before the first shovel ” and that the government should consider pulling the emergency brake because it is not too late “to avoid spending “40 billion on the world’s worst government buildings“. Urban planners, artists and historians protested intensely against the demolition of the Y-Block. However, one type of argument has trumped all forms of criticism, namely the security-argument.

In 2012, a fact-finding commission (the Gjørv Commission) delivered its findings with respect to three key questions:

The Commission stated that the attack could have been avoided, among other through the permanent closing of the streets Grubbegata and Akersgata for traffic, the integration of bollards and so forth. Had preparedness plans developed after 9/11 2001 been properly implemented, it would have been enough to thwart the attack. The Commission`s statements marked the beginning of the securitization of the reconstruction process.

… fundamental questions concerning the role of values such as democracy and openness in the reconstruction process have been converted into national, urban, and human security issues …

In the immediate aftermath of the attack, the H-bloc was scheduled for demolition. Eventually the S bloc, R4 and controversially, the Y-bloc were removed to make room for a new government complex.  In parallel with the demolitions, over time, fundamental questions concerning the role of values such as democracy and openness in the reconstruction process have been converted into national, urban, and human security issues.

The argument of security was central to the decisions to rebuild the government complex – and to relocate and centralize all ministries (except one) and the prime minister’s office in the city center of Oslo. Security was also the key argument for creating an outer perimeter of 75 meters (a security zone) around planned buildings. The intention behind the perimeter is to prevent vehicle-borne threats – like what played out 22 July 2011 – from getting access to the buildings.

However, the decision to rebuild the government complex in a dense city center and the implementation of an extensive security zone will have consequences that goes far beyond protecting the bureaucrats working in the ministries. Inside the security zone, 340 private businesses with 5500 employees are located. Additionally, the area surrounding the government complex is envisioned as a public space.

The security zone will consist of multiple layers of security measures such as surveillance cameras, bollards, control stations, security guards and probably artificial intelligence such as car sign recognition technology. The implementation of this type of regime requires those working in and near the government complex and bypasses to acquiesce to forms of continuous and preemptive surveillance that could be highly problematic in terms of privacy rights and civil liberties. Ordinary citizens, protesters, media houses, courts and two churches will also be affected by these surveillance measures.

While the measures are intended to make government employees safe, they will in practice affect everyone using and traversing the cityscape surrounding the complex.

The absence of a public debate

As of 2021, the reconstruction process has largely been converted into a construction, cost, and security-management project.

It is always difficult to argue against better security, especially after a devastating bomb attack against key democratic institutions. Who wants less security?

Despite the intrusive nature of these measures – both financially and in terms of surveillance –  there has been very little public debate on how security should be weighed against other central values such as free commerce, privacy, openness, and democracy. Even when the cost estimates for the new government quarters increased from NOK 16.3 billion in 2014 to up to NOK 36.5 billion in 2020 primarily due to security, the imperative of security – and considerations of what constitutes ‘acceptable’ levels of security – have continued to be portrayed by the government as something that is not open for public debate but should be left to the security experts.

It is always difficult to argue against better security, especially after a devastating bomb attack against key democratic institutions. Who wants less security?  Nevertheless, it is important that the consequences of political decisions concerning security – including the types of troublesome tradeoffs involved – are debated in the public. Historically, Norwegians have been skeptical against counterterrorism measures but 22 July shifted popular perceptions of security measures from something negative to a necessity. This suggests that the security regime currently being planned and implemented would not have been accepted a decade or two ago – and that the planning of such a regime would have been surrounded by a vociferous public debate.

An open and broad-based dialogue on risks, threats and security measures is perhaps the most important security measure to safeguard Norwegian democracy. Thus, it should be possible to have public discussions on a plethora of themes such as whether the planned security zone in downtown Oslo resembles an attempt to prepare for a historical category of terrorist attacks rather than a forward-looking measure; whether the choice of building materials with large glass surfaces is the right thing for what is deemed to be a vulnerable terrorist target, or whether the centralization of all ministries within the security zone is the best option – or whether this might engender a risk transfer to other buildings or public spaces.

… the government quarters [ … ] is also in itself a memorial

Finally, the government quarters – in its current state as a construction site and in its future incarnation as a fortress of glass and steel – is also in itself a memorial.

When the government complex is complete, will it be seen as a worthy memorial for visitors and a safer place for those who work there – or a testament to the mistaken prioritization of outdated notions of security, at the expense of democracy and openness?

There has been little conversation on whether the proposed security measures can co-exist with and facilitate access to a permanent memorial. The temporary national memorial from 2018 – replacing twin monument to Memory Wound commemorating the Utøya massacre which was cancelled in 2017 – is placed at Johan Nygaardsvold’s plass in front of the H-bloc. The memorial consists of a wall with the names and ages of the victims. The wall is placed on a deck of broken glass, symbolizing the broken glass resulting from the attack.

Remarkably, as of 2021, there are no concrete plans for a permanent memorial at the Government quarters, nor are there any public conversations about what such a memorial should look like and what functions it should serve, and in the context of an evolving security regime, what functions it could serve.