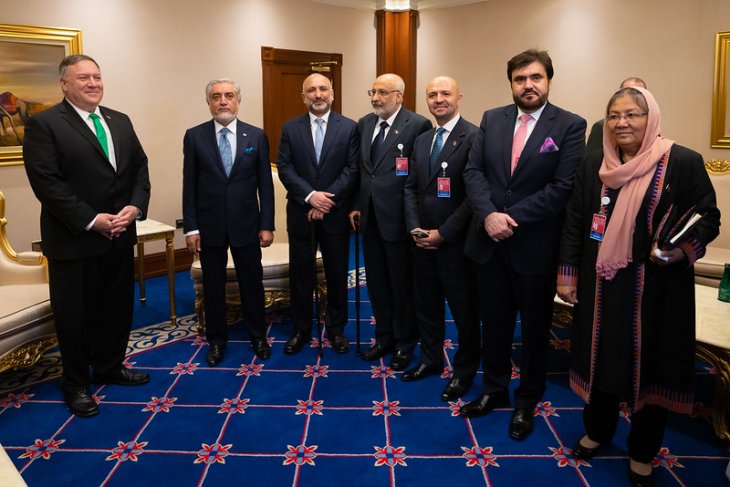 One year ago, on February 29, 2020, the Doha Agreement was signed between the United States and the Taliban. This agreement outlines a process for a gradual withdrawal of foreign troops in Afghanistan, Taliban’s commitment to preventing the use of Afghan soil against the US and its allies security, and the initiation of intra-Afghan negotiations on modalities for comprehensive ceasefire and agreement on the political roadmap. Once both sides complied with the release of prisoners as mandated in the Doha Agreement, the first round of intra-Afghan dialogue between the Government of Afghanistan and the Taliban took place in September last year that produced rules and procedures for negotiations.

On 23 February 2021, the second round of intra-Afghan dialogues began, but parties face obstacles to get the negotiations off the ground as they have yet to agree to an agenda. Regardless of how these peace talks end, however, our new article demonstrates the need to explicitly recognize that women’s rights are on the table. Moreover, only a successfully implemented comprehensive peace agreement is likely to substantially improve their situation in a country which has come to signify the politicization of women’s rights.

War is destructive and women suffer much during and after war. In this respect, the situation in Afghanistan is particularly imperative. The Afghan Ministry of Women’s Affairs recently acknowledged an increase in violence against women in the past year. Violence against women did not abate during the last rounds of negotiations. In recent research, the destructive nature of war on women has been discussed as additionally furthering social transformation or women’s empowerment due to social ruptures and increased mobilization of women for a positive change.

Hence, in a large number of peace processes, data shows, women become mobilized and ready for change. For pressure by women’s groups to be translated into actual post-war improvements in women’s rights, however, there is a need for substantial reforms and institutionalization. Our research identifies three conditions for such reforms: opportunity, willingness, and international influence. All these three conditions, we argue, exist only when a war terminates through negotiation and implementation of a comprehensive peace agreement. In this scenario, women’s movements joining forces with other civil society actors can constitute important partners during the implementation processes as displayed in Liberia, Northern Ireland, Nepal, and Colombia. Moreover, our research underlines the importance of fully recognizing this power dynamic between local actors and stakeholders.

The significance of third parties

This effect on women’s rights is separate from that of the UN Security Council Resolutions on Women, Peace and Security (WPS), a normative framework that also has an independent and robust effect on women’s rights in our study. Because our study shows the significance of WPS norms on women’s political rights development in societies emerging out of violent armed conflicts, it is imperative to overcome the growing resistance in implementing UNSC resolution 1325.

Most importantly, our study provides ample and concrete empirical evidence on the imperative of influential third parties like the new Biden administration and the United Nations Security Council to consistently support women’s inclusion in peace processes. For example, an explicit statement by the Biden administration that it will support women’s inclusion in peace processes around the world and not be satisfied with simply protecting earlier progress on women’s rights in Afghanistan could be key. Likewise, as penholder on Afghanistan, Norway could play a central role, which is critical if it is to fulfill its fundamental aim in the area of women’s rights and gender equality “to increase the opportunities available to women and girls, promote their right to self-determination, and further their empowerment.”

For the UN, but also for international organizations, such as the European Union and the African Union, who seek to promote peace that benefits both men and women in countries coming out of armed conflict, our study has implications for designing intervention with long-term gender equality objectives. Once a peace agreement is in place, our study shows that they are critical for influencing and supporting the government in handling implementation-related challenges, providing resources, and addressing demands for improvements in women’s political rights. Because women’s political rights can improve only after successful peace implementation, international organizations should integrate a gender equality perspective in the broader implementation processes instead of promoting “gender” as a single issue which often faces resistance from institutional and cultural perspectives.

The need for inclusive peace for women in Afghanistan and beyond

If conflict termination through an implemented peace agreement is the key driver behind the promotion of women’s political rights in post-termination periods, then women – of varying backgrounds – need to be included in negotiations to articulate areas of reform that are pertinent to their empowerment. Our study here empathetically underlines that we need to move toward women having a say in the core negotiation and implementation processes; a standpoint taken by the UN Secretary-General. The broader reform processes set in place are more important for improving women’s political rights than the specific provisions on women’s rights in an accord, as our study shows. These insights carry two important policy implications. First, it is crucial to design implementation processes that explicitly consider both women’s and men’s situations and rights. Second, it means that women’s inclusion during the implementation process is needed to safeguard progress. The current peace implementation process in Colombia clearly underlines this argument.

Finally, while internationally coordinated resistance to women’s rights is growing in strength, simultaneously, it is central to recognize that women’s mobilization and gender equality have seen substantial developments over the last century. In the Sustainable Development Goal 5, gender equality has been defined as a common global concern that is ever-present in the termination of war. This is apparent at the talks on peace in Afghanistan. Fawzia Koofi, one of the Government delegates and the Deputy Speaker in Parliament, stated in September that, “We are fighting for a country where everyone will have the right to cast their vote regardless of their gender, religion, sect, etc. Women’s rights and issues have to be included everywhere, they cannot be segregated”. Our study strongly supports the urgency of Afghan women’s calls.