On 7 April, prime minister Erna Solberg presented the government’s plan for reopening society. The plan provides predictability and clarity about prioritization, including the prioritization of children and young people. This is welcome, but the plan also reveals the problematic aspects of Norway’s handling of the coronavirus crisis. 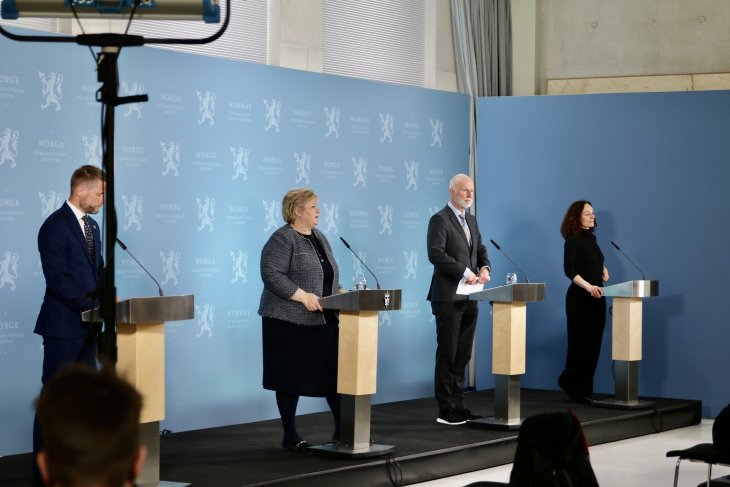 The government’s apparent starting point is that restrictive measures must be kept in place until transmission of the virus within society is virtually eradicated. We are particularly concerned about the underlying idea that society should be treated like a patient. This idea is manifested in the three criteria for reopening: transmission and infection rates; capacity in the health system; and vaccination rates. As a result, reopening is based on an overly narrow set of considerations and the decisions are being taken by the wrong public authorities.

Norway’s director general of health, Bjørn Guldvog, said on 5 April that he hoped to start the first phase of reopening in May. “With today’s situation regarding infections and the slightly constrained rates of vaccination we have now, it would be very difficult to open now. But the further we get into May, the more people will have been vaccinated,” was his reasoning for why we cannot start now.

The assistant director general of health, Espen Rostrup Nakstad said the same day that opening cannot start until “we no longer have ongoing outbreaks of infection where we do not know the route of transmission”, and “there we are talking about well under 200 infections daily in the country as a whole”. The following day, the director general of the Norwegian Institute of Public Health, Camilla Stoltenberg, said that the R-number should remain below 1 for several weeks, preferably several months, before Norway can reopen. Clearly, such criteria form the basis of the government’s plan.

The government’s plan is flexible, as trends in rates of infection and sickness will govern when society can be reopened. The plan treats society as one would treat a patient with a bacterial infection, with reopening being a question of whether the infection has been eliminated, so that one can stop administering antibiotics.

Society is a complex interaction between individuals who have legitimate and important interests, needs and – not least in a democracy – the right to give their opinion.

But society is not a patient, and “treating” a pandemic is not a purely medical matter. On the contrary, society is a complex interaction between individuals who have legitimate and important interests, needs and – not least in a democracy – the right to give their opinion. Just as important as the medical logic, is the political, economic and legal logic expressed in Section 1-5 of the Communicable Diseases Control Act (the “Act”), which states that coercive measures may not be used where, given nature of the case and other circumstances, they would constitute a disproportionate intervention. The Act also states that when implementing measures to control infection, emphasis must be placed on voluntary partipation by the person or persons to whom the measure applies. Although the Act does not say so expressly, this must also apply to the retention of measures to control infection.

Accordingly, the relevant issue is how long is it reasonable to keep society shut down. Section 1-5 of the Act is not exhaustive. It must be supplemented by the rules of Norway’s Constitution and the European Convention on Human Rights (ECHR), which protects fundamental rights such as the right to education, the right to respect for family and private life, the right to liberty of movement, and the right to freedom of assembly and association, and which also establishes rules and criteria for imposing restrictions on these rights.

The question of reopening society must be based on a broad set of interests – much broader than those on which weight is placed by the health authorities. Nor is it the case that the health authorities should have the decisive word about when and how society should be reopened. Initially, this question is for Norway’s political organs, its government and parliament. As a last resort, it is for the courts to determine how long it is lawful to keep society shut down.

The burden of living with the measures increases as time passes. This increasing burden also implies that the requirements imposed for justifying each individual measure become ever higher. The children’s ombudsman, Inga Bejer Engh, explained this clearly in the NRK programme Debatten, broadcast on 6 April: “Our knowledge about the serious consequences of the measures for children and young people has become more and more concerning over the past year. The balance between the advantages and disadvantages of these strict measures is becoming weighted more and more towards the disadvantages. Maintaining these strict measures for ‘weeks’ is unacceptable.” The law does not allow one to impose strict measures “for safety’s sake”, or on the basis of poorly justified better-safe-than-sorry evaluations that lack any specific professional support for the conclusion that the advantages of a measure outweigh the disadvantages. One must also attach weight to the general public’s steadfast observance of the measures, and justify why recommendations, reasonable hygiene measures, and testing, isolation and contact tracing are not sufficient.

Is the justification sufficient?

The justification of strict infection-control measures with claims that the health system is in acute danger of being overwhelmed, or that large numbers of people are in danger of dying or becoming seriously ill, will scare most people into an obedient state of acceptance. But the measures must also be capable of being justified with verifiable numbers and facts. The paradox is that Norway has not in fact been in such a situation during the pandemic – we have been far from the situation that the National Preparedness and Response Plan for Pandemic Influenza, published in 2014, considered we should be equipped to manage. And it is not sufficient to refer to the authorities’ measures in order to explain the low numbers of people who have become ill or died of Covid-19 in Norway, and the limited strain on the health system. After more than a year, the experiences we have gained from many countries show that the causative factors are complex. This information should provide grounds for humility with regard to introducing and keeping in place invasive measures that affect people and society.

A sell-by date for lockdown

There is good reason to ask whether the legal basis for keeping society shut down is in the process of expiring. In that case, it is surprising that key representatives of the health authorities cannot take account of this, but instead base their thinking one-sidedly on medical evaluations and worst-case scenarios. Infection statistics cannot trump an actual society.