The decision of the Norwegian Nobel committee to award the 2021 Nobel Peace Prize to Dmitry Muratov (together with courageous Philippine journalist Maria Ressa) announced last Friday astonished, angered or elated everybody in Russia who has even a slight interest in politics or minimal exposure to media. 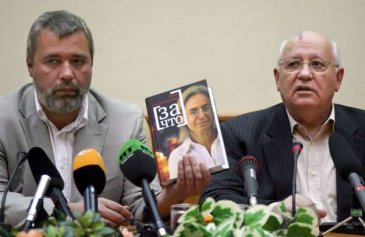 Muratov himself was astounded (and even discarded the first call from Norway as fake) and acknowledged that the award goes to the whole team of Novaya gazeta and in particular to the six journalists murdered in the line of duty: Igor Domnikov (2000), Yuri Shchekochikhin (2003), Anna Politkovskaya (2006), Anastasiya Baburova (2009), Stanislav Markelov (2009), and Natalya Estemirova (2009). Muratov founded Novaya gazeta in 1993 and has since remained its editor staying steadfastly on the course of upholding liberal values and human rights.

US President Joe Biden congratulated Ressa and Muratov pointing out that defending their media outlets against forces that seek their silence “they have faced constant threats, harassment and intimidation, legal action, and even, in the case of Muratov, the death of his colleagues”. Dmitri Peskov, press-secretary to President Vladimir Putin, also issued a few words of congratulation mentioning Muratov’s bravery and commitment to his ideals. The barely hidden irritation with this award has shown itself in the official expansion of the notorious list of “foreign agents”, to which nine activists, including journalists working for Radio Liberty and BBC, and three organizations, including the investigation group Bellingcat, are added. One particular target of state-enforced discreditation this time is the media outlet Caucasian Knot, which covers human security issues in the Caucasus and works together with Novaya gazeta on investigating gross human rights violations in Chechnya.

Repressive measures against independent media have been massively expanded in Russia this year, and many outlets branded as “foreign agents” (like VTimes) had to stop their work, while other (like the investigative team Proekt-Media) were declared “undesirable”. Russian Federal Security Service (FSB) has recently complied a long list of security-related topics, including just about everything related to the space program, on which any gathering of unclassified data would result in blacklisting as “foreign agent”. A large group of Russian media organizations, including Novaya gazeta, has issued an open appeal for revising and discarding the legislation on the status of “foreign agent”, which gathered more than 165,000 signatures, but hasn’t made any difference in the harshness of suppression of voices deemed dangerous for the stability of ruling regime. Independent investigations of corruption are persecuted with particular vengeance, and the recent publication of Pandora Papers, in which hidden offshore assets of many Russian officials are exposed, has triggered a new surge of repressions.

Struggle against corruption in Russia has a fearless champion in Alexei Navalny, who was thrown in jail immediately upon his return to Russia from Germany (where he had recovered from the poisoning with the nerve toxin Novichok) and now awaits a new trial against his “extremist” network. His many supporters are convinced that he deserves the Nobel Peace Prize and that the Norwegian committee should have gathered the same resolve as in 1975, when Andrei Sakharov was granted the honor, or in 1983, when Lech Walesa became the laureate. Muratov himself said that he would have voted the prize to Navalny. Even among Russian liberal opposition, Navalny has more than a few foes, but Putin is obsessed with the idea of threat coming from this young, charismatic and unshakably optimistic politician and forbids his courtiers to mention his name. Were the prize awarded to Navalny (as it happened, on the day when Putin celebrated 69th birthday), the Kremlin would have resorted to extreme measures to exact revenge on Norway, the West, and every manifestation of dissent inside Russia. Choosing Muratov, the committee has focused international attention on the severe suppression of free media in Russia, but has also provided Novaya gazeta an indirect protection from punishment for further intrepid and professional work of its journalists.

Suppression of independent media in Russia will continue to escalate, Navalny’s life remains in grave danger, the despotic rule in Chechnya is not going to soften, so some may argue that the Nobel Peace Prize has not made any difference whatsoever.

Yet, the impact is more than just making Dmitry Muratov a major figure on Russian political arena and an international celebrity. It will help Novaya gazeta to gain new energy in reinventing itself and transforming from a traditional newspaper into a far-reaching media platform and a powerful influencer in social networks. It could then play a key role in uniting Russian opposition and shaping an agenda of peaceful change that would challenge and prevail over Putin’s autocratic stagnation. His deeply corrupt regime depends critically upon the lies produced by cyclopean propaganda machine, and a voice of truth amplified by the unique recognition can spell its inevitable implosion.

Full text of this article can be found in Eurasia Daily Monitor.