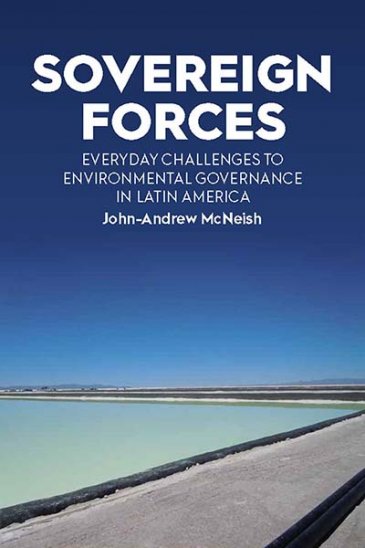 The first book, a monograph authored by McNeish and entitled Sovereign Forces: Everyday Challenges to Environmental Governance in Latin America, looks at diverse claims to sovereignty over natural resources in the Latin American context. It considers how sovereign claims made from below – by indigenous and peasant peoples – are a critical part of struggles over power, territory, and belonging connected to natural resources. Latin American states are a product of these struggles.

The second book, entitled Our Extractive Age: Expressions of Violence and edited together with Judith Shapiro at American University, examines the intimate interconnection between natural resource extraction and violence.

In mid-November, Green Curses project member Dr. Kendra Dupuy had the chance to sit down with Professor McNeish to discuss an important topic raised in Sovereign Forces: the connections between resource sovereignty and environmental governance.

Question: You point to a tension between local communities and states in resource sovereignty claims. Could you say more here about these relations?

One of the things I’m pushing for in the book is recognition that there is an archaeology of relations that’s being created through state formation, and that this archaeology needs to be reckoned with. Rather than just looking at the present, and how people or the state think or are organized in the now, we have to also look back at how we got get here in the first place: the history of social and economic and political relations. There is an original sin as a result of the formation of settler states in Latin America. The violence of state formation is significant in terms of the determination of inequalities, which are very material in form, such as economic relations and the division of land.

There has been a move towards more participatory forms of environmental governance as a result of the rights agenda that started to have impact on governmental institutions and governance actions from the late 1980s and early 1990s onwards in Latin America. Latin America quite early on recognized indigenous peoples and international conventions on their rights, which required governments to take actions to update and reform existing laws and regulations, meaning they needed to be more participatory. These populations had a right to consultation and informed consent. Additionally, civil society in general in Latin America has been very good at pushing states to be more responsive and change their laws and regulations such that it becomes more generally participatory. As a result, there has been a shift over time towards more dialogue between state and community actors. There has also been a shift to different forms of participation and dialogue and consent in environmental governance, such as prior consent, though the degree to which this is applied varies with the proportion of indigenous peoples in each country. Participatory mechanisms have expanded out from indigenous peoples to other types of participation and dialogue mechanisms and multi-stakeholder forums for local populations. This includes mechanisms such as popular referenda, which has been institutionalized in several Latin American contexts including Colombian and Guatemalan law. Forms of dialogue like roundtables or national dialogues are also institutionalized in national law for the mining sector in Guatemala. Two additional influencing factors in the 1990s has been the World Bank’s poverty reduction strategies through participatory means, as well as NGOs and donor agencies that worked with participatory research methods. All of these mechanisms are considered in these two books.

Question: How do you think environmental governance institutions could better incorporate an adaptive management approach in practice?

Adaptive governance means flexible governance forms that can be reworked over time in response to rising challenges and changing circumstances. This approach picks up on the concerns of political ecology in an applied manner, which emphasizes recognizing power relations and how those relations come up against physical boundaries. This approach has been adopted in researching things like mine site reclamation and broadening out environmental impact studies to take account of social, political, and economic realties. In terms of power, how to get the powerful to give up power is a key issue. If Latin American governments are honest in their desire for more peaceful and more effective and efficient forms of environmental governance, they have to recognize that things have to change and acknowledge their own violent histories as settler societies. If states and businesses want to make more money, they would be better off operating in a relatively peaceful environment. It’s not efficient business or government to have high and increasing levels of violence surrounding all types of development. By taking this seriously, they would recognize the concerns of local communities. Local communities and civil society are seeking more dialogue and negotiation about the sharing of benefits, how land is used, how resources are exploited, and so on. There need to be meaningful participation opportunities and engaging more with communities, and in forms that acknowledge the injustices of the past.

Question: Do you see resource sovereignty claims playing out in the global green energy shift?

There is likely to be a rising level of conflict and violence surrounding renewable energy projects. These projects still have environmental and social impacts, and they don’t rethink how land is used and privatized and removed from local communities, or how land is transformed. In the green shift, we are already seeing a rise in the exploitation of all forms of natural resources, including fossil fuels. The green shift will happen over time and more, not fewer resources, will be required in the phase of transition. For renewables, it’s not only about where you build the project, but it is all the resources that go into making those technologies and how they transport them. This is a massive, planetary undertaking, wherein we are extracting resources from everywhere, and financing is coming from multiple places, and it connects to the legal and the illegal. At the same time, as rules and law change there is likely to be more participatory governance, both by states and companies, to lower levels of violence and contestation and to find a space to move projects forward. The question remains, and the question contemplated in Sovereign Forces, is how to guarantee that the results of this participatory governance is substantive in its delivery of environmental justice and a just energy transition.