Data on the concentration of Russian troops was solid; the diplomatic offensive executed by Moscow was deliberately disagreeable; yet, many experts (myself including) refused to accept the proposition on the coming war as “inevitable”.

Denials streaming from the Kremlin were never convincing, but President Vladimir Putin’s reputation as a shrewd pragmatist still clashed with the forecasts that he could commit a blunder of such monumental proportions.

In the matter of five days, if not already in day one of the full-blown hostilities, it has become clear that the scale of obstacles and damage goes far beyond the unduly optimistic risk-calculus in Moscow. 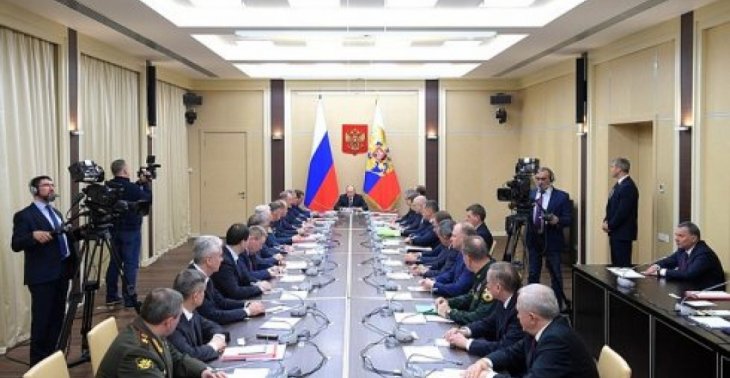 Every student of Clausewitz (who has a place of prominence in Russian strategic culture) knows that wars rarely go according to plans; this one, however, never had a chance to register a success.

Its basic assumptions on own strength and enemy’s weaknesses are too deeply flawed, and Putin’s underlying proposition that Ukraine is not a real state, but just an “artificial construct” that would collapse under direct pressure, is inevitably proven wrong.

His courtiers were afraid to say a word of disagreement, but the top brass should have known better than to kowtow to the Commander-in-Chief. Defense Minister Sergei Shoigu is the only person in the Kremlin court with own reputation and support base, and he saw plenty of man-made disasters in his previous job as minister for emergencies. General Valery Gerasimov, the chief of the General Staff, gained fame for his theorizing on “hybrid wars”, but he knew that the Russian army has only limited experience in and capacity for fighting a large-scale conventional war. Both, however, opted to report readiness for conquering Ukraine, and now have to answer for the setbacks.

If Putin’s track record in power projection experiments tells us anything about this extraordinary crisis, it is that he is set to double the stakes and blame the West for the severe consequences. The latter is partly true, even if the main cause of the derailment of Russian war plans is the fierce resistance of Ukrainian army as well as civilian population. Putin has clearly miscalculated the strength of NATO unity and the US leadership, expecting only modest sanctions and plentiful lamentations. Now he has to respond not only to the debilitating distortion of Russian financial system, but also to such punishing measures as the possible closure of the Turkish Straits to the Russian Navy. The response quite probably would involve curtailing or even complete stop to the supplies of Russian natural gas to Europe, but this is hardly going to undermine the NATO resolve.

… nothing resembling a “patriotic mobilization” can be orchestrated

Putin’s stakes in this unwinnable and unnecessary war cannot be higher, and he needs to demonstrate decisive success in the shortest possible time, before the heroic Ukrainian resistance and expanding Western engagement with it undercut the far from solid domestic support for the aggression. The Kremlin has taken the ability to suppress all anti-war protests for granted, and repressions can indeed be intensified, but nothing resembling a “patriotic mobilization” can be orchestrated.

This may turn out to be the most serious of miscalculations, and the only way to negate it available for the war cabal in Moscow is to deliver something resembling a victory, first of all in Kyiv and Kharkiv. Massive use of airpower is necessary for breaking the defenses in these major urban centers, and this upping of brutality is certain to bring more outrage in and punishing measures from the West.

Pushed in the corner, Putin may resort to desperate manoeuvres and opt for brandishing his much-advertised nuclear instruments, first of all non-strategic weapons. A strike remains in the domain of unthinkable, but deploying nuclear warheads to Crimea and moving them on board of combat ships are steps that could be executed already in the next week. Western politicians and Russia’s neighbours to the South and East need to take measure of the risks that until the outbreak of the first major war in Europe in 75 years appeared too high to contemplate.

The most immediate task is clear: to help Ukraine to defend its sovereignty and territorial integrity. The Ukrainian stand for the right cause, and every day that the defiant yellow-blue flag keeps flying over Kyiv brings their victory closer. Putin’s regime is unlikely to survive the humiliating defeat, and this sets up the next, and perhaps even more difficult task: to ensure that this breakdown would not signify a catastrophe for Russia and an unmitigated disaster for the world.

To tell the truth, I haven’t seen such a constructive and informative article for a long time. I can say that this theme is very sensible and we will not be aware of all facts in full measure. I can say that every war will never bring something good because it is destructive. Unfortunately, you are absolutely right that deploying nuclear warheads to Crimea and moving them on board of combat ships is quite realistic and anyone is not immune from this. The fact that it is really difficult to anticipate the next step and subsequent actions of the Russian government is indisputable. I think that the key task is to help protect people’s lives and avoid a great deal of deaths because all people in Ukraine simply want to live in peace and not be afraid of the lives of their loved ones. I really hope that it will end as soon as possible.

At the end of 1990s Putin became the leader of Russia by staging his first KGB style military operation – bombing Moscow apartment buildings to gain popularity and re-start the war in Chechnya. Putin killed his own innocent civilians, hundreds of Russians in order to boost his popularity and gather more war support. The US, EU and NATO should have seen his true face then, but decided to ignore Putin’s Chechnya war crimes and welcomed Putin to red carpet meetings and Bush even declared his trust in Putin. This further emboldened Putin who had suppressed all democratic processes internally in Russia and has successfully become a dictator and tyrant.
Putin’s first test run to settle his political goals with military adventures and military operations was in Georgia in 2008. In August 2008 Putin attacked Georgia’s Samachablo and Abkhazian regions and successfully annexed territories of a sovereign country. What did the US and EU do? Obama administration decided to do reset policy with Russia – greatest mistake of President Obama and Angela Merkel, who kept closest relations with Putin and did not want to upset Putin. Russia was not even hit with bare minimum of sanctions for conquering Georgia’s two regions.
This further encouraged Putin to find more military solutions to his political issues and goals. As Georgia’s President Mikheil Saakashvili said “Ukraine, Crimea will be the next!” the EU leaders laughed at him. In 2014 the new reality sets in – Putin did order and conquered Crimea and Eastern Ukrainian regions. At that time the Obama administration and Angela Merkel received first reality check from Putin, but they made the second greatest mistake with Putin: They set bare minimum of sanctions, did not punish Putin for violating the international laws and let him get away again!
This has turned Putin into a strong dictator backed by US dollars and EU Euros for the Russian energy exports (oil & gas), with more money going $$$ in his pockets as the crude oil prices went up, Putin was able to order more military adventures to settle his political objectives. In Syria Putin had committed number of atrocities against civilians and used chemical weapons. What consequences did he face? Absolutely nothing, verbal condemnation by the international community.
And now we are in 2022. Post WW2, this is the third time (after Georgia in 2008, Ukraine 2014) Putin had ordered massive invasion and the war of conquest of a sovereign country. Suddenly the world woke up to new reality. However, the reality was established during the 1990s when Putin planned and executed the Moscow apartment bombings, the US/EU/NATO decided to ignore the warning signs and tried to welcome Putin into the international community.
What is happening now in Ukraine should be the wake up call to the entire world. The post World War 2 international system & the world order has been shattered to pieces and international law had been completely ignored without any consequences by Putin again and again.
What Ukraine needs is the world to come to terms with reality: Putin has to be defeated and the establishment/elite power structure of the Kremlin has to change. Before this happens, the Ukrainian military MUST receive all necessary lethal defensive and offensive weapons as well.
The Ukrainians need to have anti-air capability to shoot down incoming missiles and airplanes from much higher altitudes, so the S-300/S-400 systems will be much welcome, however this is not enough. The Ukrainian army needs those MIG29s to enforce its own No Fly Zone, since the western powers are too scared to face Putin over even a limited No Fly Zone over humanitarian corridor. So lets give this power to the Ukrainians?
What the Ukrainian side needs is Patriot missile systems as well and anti-artillery systems: radars, locators and smart artillery systems from the US.
The above-mentioned weapons systems would have an immediate impact on the ground and will change the formula on the ground by giving Ukrainians much needed upper hand to control the air and protect the civilians from the #1 major killers: incoming artillery shells and missiles.