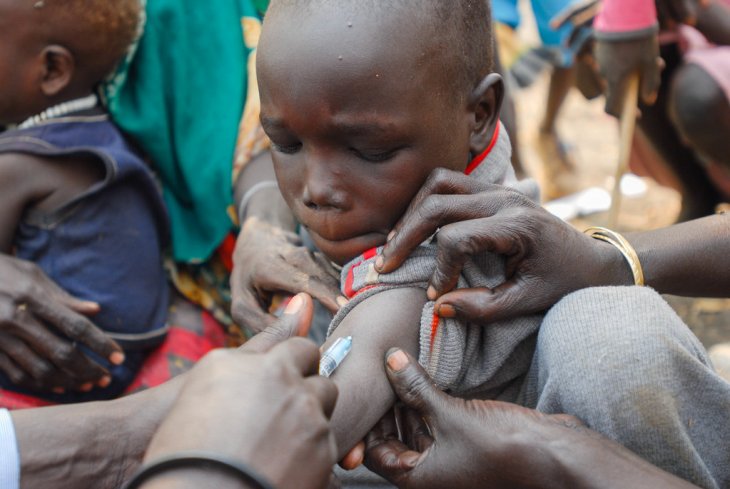 As more coronavirus vaccines begin to reach the developing world, global health authorities are pointing out the need for other vaccines as well. UNICEF recently launched a record $9.4 billion emergency appeal to help more than 327 million people — including 177 million children — affected by humanitarian crises and covid-19.

This funding appeal — and UNICEF’s goal of vaccinating 62.1 million children against measles this year — comes at a time when escalating conflicts affect millions of children and their communities. In December, for example, Pakistani Taliban gunmen killed a police officer guarding a polio vaccination team in northwest Pakistan.

How does conflict affect vaccination rates? Our recent research on African countries south of the Sahara suggests that conflict can have both positive and negative effects on vaccination.

Vaccines are critical in the world’s poorest countries, and negative health impacts in conflict-affected areas further reinforce what scholars call the “conflict-poverty trap.” In Africa, in particular, armed conflicts contribute to “development in reverse” by intensifying poverty and hindering economic development. In 2020, almost one-third of African children were living within 30 miles of violent conflict. This scenario typically leaves many children with poor access to health care and is likely to boost malnourishment and mortality rates.

How we did our research

Our study looks at the effect of armed conflict on immunization rates for children between 1 and 5 years old in 15 African countries south of the Sahara.

We examined a sample of 213,341 children for whom the Demographic and Health Surveys recorded information on immunization and linked this with information on the time and location of conflict events using the Uppsala Conflict Data Program (UCDP).

We utilized the fact that age-appropriate childhood vaccinations, according to WHO recommendations, should take place in a child’s first year of life. We compared children aged 1 to 5 with varying degrees of (local) conflict exposure in their first year of life within the same countries and communities.

Our approach compares siblings born before and after conflict in the same area, avoiding the biases associated with other methods, such as simply comparing children in conflict-affected areas with children in non-affected areas. That particular methodology may lead to biased results because conflict zones aren’t necessarily comparable — they are fundamentally different across many characteristics like poverty, remoteness, health care availability, demographics and conflict history, all of which may affect immunization rates irrespective of conflict.

First, conflicts often divert government resources toward the war effort, rather than health care. Here’s an example: In conflict-affected South Sudan, allocations to the security and public administration sectors amounted to nearly two-thirds of the 2017-2018 national budget. Only 5 percent of the budget went to social sectors, including health, education and humanitarian affairs.

And fourth, war-affected populations often flee to seek safety elsewhere. Displacement can, however, have an ambiguous effect. While displaced populations often have severely limited access to basic medical services, some people find shelter in refugee or internally displaced persons (IDP) camps, which may make it more feasible for health personnel to reach large numbers of eligible children for vaccination.

Under some conditions, armed conflict might even lead to higher vaccination rates

Under some conditions, armed conflict might even lead to higher vaccination rates. Areas that have seen conflict and humanitarian deterioration might attract health aid and health interventions — including immunization campaigns that can help boost vaccine uptake.

How does conflict affect demand for vaccines?

Exposure to armed conflict may also affect local demand for immunization. To the extent that conflict reduces household income or expectations about future income, demand for health services overall may decline.

Second, armed conflict may exacerbate mistrust in government or international institutions, and — by association — the public health system and mass immunization campaigns. During the 2018-2019 Ebola outbreak in Eastern Congo, locals attacked vaccination centers and health workers because of frustrations about the failure of domestic and international leaders to protect them against armed groups. And armed groups themselves may perceive the vaccination campaign as a political trick to trap them.

Intergroup fighting often raises the salience of religious and cultural identities and associated resistance against “Western” medicine. In Pakistan, the CIA set up a fake hepatitis vaccination campaign in 2011 to gather intelligence in the search for Osama bin Laden. This strategy generated widespread suspicion toward vaccination programs.

Conflict has a complicated effect on immunization

In short, we found no simple relationship between armed conflict and vaccinations.

Minor conflicts (those with fewer than 1,000 battle-deaths in a year) are associated with higher rates of children completing the recommended immunizations. In these conflict scenarios, emergency responses by government or nongovernmental health providers may improve vaccine rates, especially when targeted toward concentrated, displaced populations.

Are there ways to vaccinate during conflict?

The more intense the conflict, the more complicated vaccination programs become. Our research suggests that vaccination efforts may be more successful when donors focus on budget support for struggling governments, to keep vital health services up and running. This type of support can also provide safe corridors and safe zones for health personnel to reach unvaccinated children.