The supply of weapons and other military equipment has been one of two main responses by Western States to the invasion of Ukraine (the other being economic sanctions).

Compared to direct deployment of military forces, arms supplies are often seen as relatively uncomplicated and low cost means to assist a friendly or allied state.

Nevertheless, as this blog post argues, arms supplies involve complex tradeoffs between perceived risks and benefits. There are several interlinked reasons why supporters of Ukraine may decide to restrict supplies of arms that Ukraine wants to use in its fight against Russia. 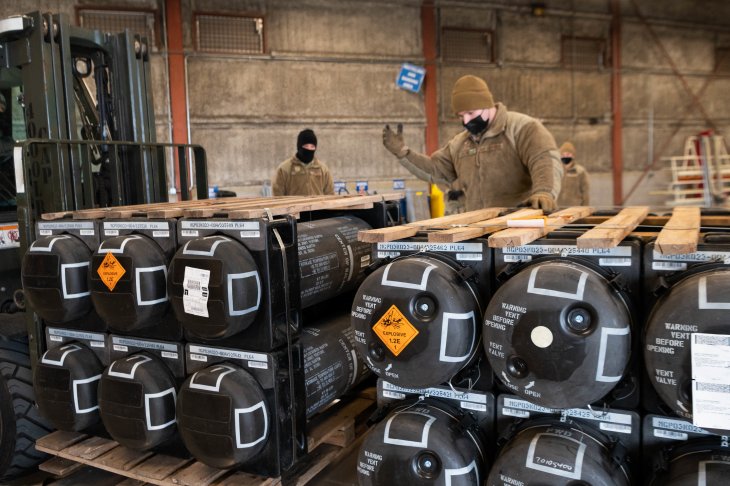 Significant quantities of arms have been supplied to Ukraine. For example, on 6 March, one week after the start of the war, it was reported that the US and its allies had announced the transfer of over 17 000 anti-tank weapons to Ukraine. In addition, there have been and transfers of thousands of anti-aircraft weapons and a variety of other equipment. Ukraine isn’t dependent upon external supplies, it produces its own arms and has captured considerable quantities from Russian forces. Nevertheless, we do have enough evidence to suggest that external arms supplies have been used in its war against the Russian invasion.

… this blog post summarizes the interlinked dilemmas for Ukraine and the states supplying it with weapons.

Whenever arms are supplied, all parties involved have different motivations and perceptions. Ukraine’s view of its interests as a recipient may sometimes diverge from what suppliers perceive their interests to be. Russia will react to arms being supplied to Ukraine, and in ways that are difficult for Ukraine and its suppliers to predict.

Once arms have been supplied, it is difficult for a supplier to ensure they will be used for the originally intended purpose. The remainder of this blog post summarizes the interlinked dilemmas for Ukraine and the states supplying it with weapons.

During the Cold War the United States and Soviet Union were both well aware that direct warfare between them would risk an escalation to catastrophic conventional or nuclear war. They and their allies established the unwritten rules of the Cold War which entailed that they fought via proxies and clandestine operations rather than overtly against each other’s armed forces.

Where the USA or the Soviet Union deployed combat troops, the other would limit its involvement to supplying arms, training and other forms of military or economic assistance. That limitation avoided crossing the threshold to escalation that might result in a nuclear war.

To adapt Carl Sagan’s illustration, confrontation between nuclear armed powers resembles sworn enemies holding fistfuls of matches in a room which is waist deep in gasoline, and avoiding direct warfare helped to ensure that neither lit one of the matches.

I argue that these unwritten rules remain to this day (and could also be seen in operation concerning anti-Assad forces in Syria) and supplying Ukraine with arms do not cross the escalation threshold, just as they did not during the Cold War when the Soviet Union supplied arms to North Vietnam, or the USA supplied the Mujaheddin in Afghanistan.

The desire to avoid escalation with a nuclear armed adversary underpins the current refusal of NATO states to implement a ‘no fly’ zone over Ukraine. To do so would very likely involve shooting down Russian aircraft and attacking Russian anti-aircraft systems, something which would likely cross the escalation threshold.

However, the inherent problem with unwritten rules is that there is no guarantee that the other party will adhere to them, and even if they all want to, no one knows exactly where the escalation threshold lies. This makes for a potentially volatile situation.

… no one knows exactly where the escalation
threshold lies. This makes for a
potentially volatile situation.

For example, on 13 March the Russian deputy Foreign Minister stated that Russia would henceforth treat arms shipments to Ukraine from NATO countries as “legitimate targets” for military action. The NATO Secretary General had previously warned Russia against attacking supply lines in NATO members, and in any case, the Russian statement had not specified that it might attack shipments located outside Ukraine.

As of 15 March, arms supplies outside Ukraine have not been attacked, though Russia did launch missiles against a training facility in Western Ukraine. It would appear that, for now, the Russian statement was just bluster and Russia is not going to attack arms shipments when they are located in NATO members, something which would clearly cross the escalation threshold.

However, this calculation could change, especially if Ukraine is able to inflict unsustainable losses against Russian forces.

It appears that there are concerns within NATO that certain arms supplies could cross the escalation threshold. It is notable that NATO member states have not supplied Ukraine with long-range missiles that could be used to attack targets within Russia. Instead, all the supplies that have been announced involve infantry equipment that would be best used on battlefields within Ukraine.

More specifically, the recent back and forth over the transfer of fighter aircraft from Poland shows that some parties in the US and most likely other NATO members were concerned that under some circumstances such a transfer could cross an escalation threshold, such as when fighter aircraft flew from a NATO base and into an area over Ukraine contested by Russian aircraft.

… the escalation threshold is low enough that it could be crossed in some circumstances by the
supply of weapons to Ukraine.

These examples suggest that the escalation threshold is low enough that it could be crossed in some circumstances by the supply of weapons to Ukraine.

However, when no one knows exactly where the threshold lies there is potential for a miscalculation in which suppliers believe that they haven’t crossed the threshold, but the Russian leadership perceives a deliberate act of war.

Perhaps more importantly, the Russian leadership could also change their perceptions of where the threshold lies. To return to Carl Sagan’s analogy the sworn enemies holding matches while waist deep in gasoline are in a dark room and wearing sunglasses.

We can expect that states supplying Ukraine with arms will be wary not to supply too powerful weapons that could be used to threaten targets deep inside Russia, and in the future it is possible that some governments may take Russian threats  seriously if it asserts that other arms supplies may cross the escalation threshold.

Hitherto, there has been remarkable unity among NATO members and their partners when coordinating assistance for Ukraine. But that unity should not be taken for granted over the long term.

Ukraine’s supporters could also limit supplies of arms if they believe that there is a risk of proliferation. Such concerns are most apparent concerning the small arms and light weapons that have already been supplied in great numbers.

Proliferation risks are not specific to Ukraine, and there is a general problem that during and after wars a proportion of the weapons used may be hidden for later use, or sold onto those who want them more.

A quarter of a century after the end of the wars in the former Yugoslavia, arms trafficking from those regions remains an important source of weapons for European terrorist and organized crime groups. Even before the 2022 invasion, European observers were concerned about the quantities of illicit military weapons being discovered by Ukrainian authorities.

In addition to concerns about trafficking, Ukraine’s supporters may also worry about the prospect of Russia obtaining military technology that it may be able to copy or adapt.

As mentioned above, Ukraine has received from the US and its allies large quantities of anti-aircraft missiles. In Syria, such weapons were not supplied by the US to anti-Assad fighters due to concerns that the missiles could be obtained by terrorist groups that might use them against civilian airliners.

In the future it is possible that Ukraine’s supporters may become less willing to supply certain weapons if they perceive that there are proliferation risks. Such perceptions could by affected by the existence of trafficking cases, of Russia having obtained sensitive technology, or the future degradation command and control within the Ukrainian armed forces.

In such a circumstance, supplies could be limited to specific units or geographical areas, or may not be sent at all. Proliferation concerns are likely to increase if peace becomes a more realistic prospect. Wars tend to suck in weapons, whereas once the fighting stops others may have a greater need for arms.

Despite the large amount of support provided so far, in the long-term Ukraine may not be able to rely upon its supporters to provide it with all the munitions that it needs.

There may well be financial and strategic limits to what they are willing to provide. Over time those limits may change. In addition to concerns about escalation and proliferation outlined above, and especially if the war lasts for years, donors may not be able to keep up the level of support that they provided during the war’s first few weeks.

Once existing stocks are used up, providing Ukraine with newly produced munitions will be more expensive. Perhaps more importantly, suppliers face a difficult tradeoff if they fear that providing arms to Ukraine will reduce weapons available to their own forces in the event of a wider conflict with Russia or elsewhere.

… weapons
shipments may serve to prolong the war without giving Ukraine the means to win.

During the first few weeks of the war Ukraine has some independence from foreign backers. It has its own stocks of weapons acquired before 2022, and it can produce weapons itself. However, prolonged fighting may well mean that stocks are used up and its industries may be damaged by Russian attacks.  It is possible that Ukraine’s dependence upon foreign suppliers may grow over time.

However, neither the Ukrainian leadership, nor perhaps its foreign backers, know exactly how much support will be forthcoming over the long run. If the war lasts for many more months or years one risk for Ukraine is that external supplies may not be sustained at a high enough tempo. If so weapons shipments may serve to prolong the war without giving Ukraine the means to win.

What is happening in Ukraine today these events had been happening for the past 20+ years, when Putin came into power by bombing his own people – civilian apartments and committing atrocities against the Chechen people. The response from the US, EU and NATO had been just complete silence and welcoming Putin to the summits and holding red carpet meetings for him. This further emboldened Putin who attacked Georgia in 2008 and conquered Abkhazia and Samachablo. What did the Western powers do? Absolutely nothing! Reset by the Obama Administration and warm handshakes by Merkel, total ignorance of the international laws and Putin’s war crimes against the Georgian people. What happened afterwards? Putin invaded Crimea and Eastern Ukraine. What did the Western powers do? Bare minimum of symbolic sanctions that continued to feed Putin’s war machine. Then Syria, use of chemical weapons, more atrocities… . What did the Western powers do? Absolutely nothing!
So we are here as a result of Putin’s false perception that he could chew more than he could bite and the 20+ year ignorance from the EU, US and the NATO. Today there is strong response and sanctions that will take the Russian economy back to the 1990s indicators, however it is too late and too little. Ukraine needs the Patriot missiles, S-400s, S-300s, missiles to shoot down airplanes and incoming rockets at much higher altitudes than Stingers could reach, Ukraine needs much more firepower and the ability to control and close its own skies. Lets help Zelensky establish the No Fly Zone! The Biden administration looked weak, but slowly they are starting to wake up and see the true face of evil – Vladimir Putin who is trying to restore the new Russian empire…