‘Russians go home!’ (Ruszkik haza!), one of the many slogans of the 1956 revolution against the Soviet occupation, is a familiar term for every Hungarian.

66 years later, the same sentence was chanted by crowds gathered in front of the Russian Embassy in Hungary to oppose President Putin’s decision to invade Ukraine. The 1956 Hungarian revolution did not succeed, in large part due to the West’s inaction, and Ukraine’s faith is changing hour by hour. 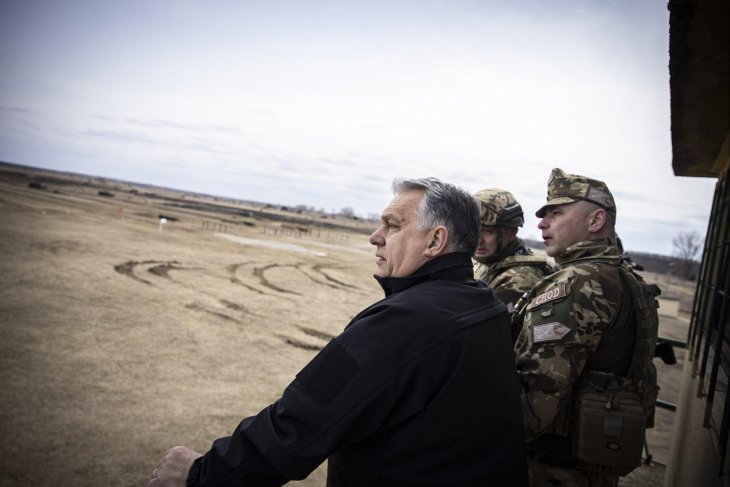 Hungary shares a 133 km long border with Ukraine, substantially smaller than the Polish-Ukrainian or the Romanian-Ukrainian border, and approximately 150,000 ethnic Hungarians are living in the Zakarpattya (Transcarpathia) region.

Recent relations between Hungary and Ukraine have not been without problems: The two countries have repeatedly clashed over what Hungary says are curbs on the rights of ethnic Hungarians to use their native tongue in Ukraine, a complaint originating from a 2017 law restricting the use of minority languages in Ukrainian schools. The Hungarian government responded by pushing back on closer relations between Ukraine and NATO.

In 1989, Viktor Orbán made his name by demanding that the Soviet troops leave Hungary, and by 2022 Orbán has developed a reputation as Putin’s closest ally in the EU

When it comes to Russia, time is a tricky phenomenon: In 1989, Viktor Orbán made his name by demanding that the Soviet troops leave Hungary, and by 2022 Orbán has developed a reputation as Putin’s closest ally in the EU. The list of Hungarian-Russian economic and political ties has substantially deepened in the past 12 years. In 2021, the Hungarian Foreign Minister Péter Szijjártó received the Order of Friendship award from Sergei Lavrov in Moscow; Hungary is dependent on Russian gas; Budapest has been amongst the first to purchase the Russian covid-19 vaccine, Sputnik V; and there is a long-delayed nuclear power plant investment in the making.

Building on years of closer and closer cooperation, on 1 February, Orbán conducted a ‘peace mission’ and met with Putin to reiterate that sanctions against Russia are ineffective and crucially that there is a ‘Hungarian way’ of doing politics: be a NATO and EU member, but still have excellent relations with Russia. The current conflict in Ukraine is the real test of the Hungarian way.

Make no mistake, Hungary condemned Russia’s invasion of Ukraine and laid down Hungary’s position towards the conflict: ‘We have to stay out of this war.’ And what this ‘staying out’ means is summarized well by the government’s official website, which opens with a picture of Prime Minister Orbán and his colleagues from the military and defense industry (only men, of course) accompanied by the following sentences: ‘Hungarian people’s safety is the most important’ and ‘we provide safety for people coming from Ukraine’.

Ensuring the safety of Hungarians comes in different, primarily non-military forms: Hungary has offered to host talks between Ukrainian and Russian leaders. The government announced that it is not going to send any weapons or troops to Ukraine. It will support the joint EU and NATO standpoints  and sanctions regarding the conflict, and it will strengthen security around the Hungarian-Ukrainian border for two reasons: to prevent the infiltration of armed elements, and to provide humanitarian assistance for Ukrainian refugees[1] who in Hungary will come to a ‘friendly place’, a substantially different approach from the 2015 refugee crisis when Afghan and Syrian families tried to cross the border.

The border protection and the humanitarian assistance to the Ukrainians are to be ensured by the so-called Operation Eastern Shield 2022. There were reports that, in the early days of the conflict, the Hungarian military moved some of its troops to the eastern border region, and  a few days later the Hungarian Defense Forces asked people not to share information about these troops’ numbers and whereabouts. Most recently, on 28 February, while the government agreed to activate the so-called European Peace Facility, empowering the EU to deliver weapons to Ukraine, it decided not to allow deliveries of EU weapons destined for Ukraine to transit Hungarian territory because such deliveries might be targets of military actions.

Events in Ukraine are inseparable from the upcoming April election in Hungary. Opposition leader Péter Márki-Zay criticized the government and argued that if he were to become the PM, he would support Ukraine’s bid to join NATO, and that if the military alliance allows it, Hungary would send weapons and soldiers to Ukraine, although he added that ‘such an issue is not on the table yet’. The opposition leader’s words provided important political munition for the government, allowing it to portray Orbán as the peace-seeker and Márki-Zay as the war proponent.

Which narrative the Hungarian voters will get behind, and whether the ‘Hungarian way’ can be maintained in times of war, remain to be seen.

Is this Ukrainian genocide?