Vladimir Putin’s speech on 24 February was not only a formal announcement of his invasion of Ukraine, but also a defence of this use of force under international law.

The fact that Russia is relying on international law is no surprise – Russia has always done so. The question is whether its arguments have any merit. 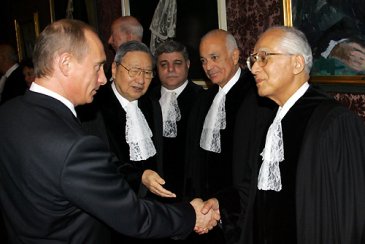 Article 2(4) of the UN Charter prohibits the use of military force against another state. The International Court of Justice in the Hague has also established the principle that aiding a rebel group in a foreign country is prohibited.

These prohibitions had already been violated by Russia through its annexation of Crimea and its supply of military assistance to rebels in Luhansk and Donetsk. In relation to its invasion of Ukraine, Russia has made several claims under international law.

Putin argues that NATO has broken its promise not to expand eastwards. But no binding promise was ever made. In any case, the decisive contribution of international law in this debate is that a state’s right of self-determination also includes Ukraine’s right to choose its own alliances.

Nor can Russia invoke the right of self-defence pursuant to Article 51 of the UN Charter as a defence against NATO expansion. No such right to preventive self-defence is recognized in international law.

Further, Russia claims that a genocide is being committed against Russians in eastern Ukraine. But genocide requires an intention to partially or completely eradicate an ethnic group, and this is obviously not the case.

Moreover, even if a genocide had taken place, Russia would have no right under international law to conduct a so-called humanitarian intervention. Such interventions must be approved by the UN Security Council (“responsibility to protect”).

Putin can also not use an invitation from the two breakaway republics to justify the invasion. A right to secede could only be relevant for these two regions in the event of extreme human-rights abuses by Ukraine, which is something we have not seen.

No merit in any of Russia’s justifications

Putin used much of his speech to accuse the West of similar violations of international law. This included the military interventions by the United States and others in Kosovo, Iraq, Libya and Syria, which were illegal or of dubious legality under international law.

Previous violations of international law are not defences for a new violation: one crime does not excuse the next.

Finally, Putin has claimed that Ukraine cannot be considered an independent state. Yet, in addition to the fact that Ukraine fulfils all the criteria for statehood, Russia itself in the legally binding Budapest Memorandum of 1994 undertook “to respect the independence and sovereignty and the existing borders of Ukraine”.

Accordingly, there is no merit in any of Russia’s justifications.

What consequences are relevant for violating these fundamental rules of international law?

The UN Security Council can resolve to do anything from condemning Russia’s crime of aggression to adopting various forms of economic and military sanctions.

However, Russia used its veto right against a Security Council resolution “deploring” Russia’s “aggression” against Ukraine and demanding that Russia “immediately cease its use of force against Ukraine”.

Ukraine can file proceedings against Russia at the International Court of Justice (ICJ). As Russia has not accepted the ICJ’s general jurisdiction though, the ICJ has authority to rule only when it is provided by special conventions.

For example, Ukraine has two pending cases against Russia concerning violations of the Terrorism Financing Convention and the Convention on the Elimination of Racial Discrimination, in relation to Russia’s conduct in Crimea and eastern Ukraine. This type of authority was used last Sunday when Ukraine filed proceedings against Russia at the ICJ for violation of the Genocide Convention, arguing that Russia has abused the definition of genocide to justify its aggression against Ukraine.

The International Criminal Court (ICC) has jurisdiction to prosecute leaders responsible for crimes of aggression. But this jurisdiction only applies to the ICC’s member states, which do not include Russia.

The ICC has warned, however, that it is investigating whether war crimes have been committed in Ukraine, since Ukraine gave the ICC permission to carry out this investigation in 2015. The European Court of Human Rights (ECtHR) deals with violations of human rights, and the court is already handling several cases between Russia and Ukraine concerning eastern Ukraine and Crimea.

In addition, there are 2,000 complaints against Russia before the court in relation to the situation in Ukraine. Russia has now been suspended from the Council of Europe, although there is a concern that Russia will now withdraw itself from the ECtHR’s jurisdiction.

International law also establishes rules about how individual states should behave towards states that have violated the ban on using military force. First, states have an obligation not to recognize the occupied areas. In addition, states have a right to impose sanctions and provide military support, including cyber operations, in accordance with the rules on collective self-defence.

Consistency in the defence of international law

In addition, individuals from Russia can be prosecuted in national courts for war crimes on the basis of the principle of universal jurisdiction. In certain countries, such as Germany and the Netherlands (but not Norway, surprisingly), individuals can also be found guilty of the international crime of aggression.

States have no power under international law to prevent militarily Russia’s invasion, since Russia has the ability to veto UN Security Council resolutions. However, Russia has sought to justify its actions under international law, and must answer both directly to other states and in international courts and organizations, both globally and in Europe. No state is enthusiastic about such negative exposure, not even a dictatorship. In addition, international law allows individual countries to implement sanctions and sets forth principles for what these can entail.

Many countries in the Middle East, Africa and Asia are sceptical about the West’s hypocrisy

It is important to be clear that Russia is the aggressor. At the same time, Russia can exploit the West’s dubious use of military force in several parts of the world to undermine its condemnation under international law. Many countries in the Middle East, Africa and Asia are sceptical about the West’s hypocrisy, even though they support Ukraine. This shows why it is important for Norway and other countries to be consistent in their defence of international law.

1. NATO countries were already arming Ukraine in violation of Minsk. That alone is a violation of law, and there is certainly a legal case to be made that this was a viable threat to Russian security, justifying Russian intervention in the absense of a UN resolution (Art 51). You can dispute that, but it isnt clear on its face that it wasnt a legitimate security threat. Have to dig into details (weapon systems, placement etc, recorded incriminating radio transmissions, etc)
2. Ukraine was shelling Donbas on a an almost daily basis–with NATO weaponry.
3. After 8 years, LDPR recognized as independent republics by Russia and those republics have joined RF forces in encircling Ukrainian army in east. The argument is that this is a defensive police action on the part of victim republics with the aid of a neighbor ally to repel Ukrainian forces.

So not at all clearcut that Art 51 doesnt apply. Putin is a lawyer, Russia long prepared its legal case prior to this action.