The predictable and yet shockingly brutal Russian invasion into Ukraine on 24 February 2022 has in the course of three weeks sent many tremors across the world system.

Given the heavy dependency of the al-Assad regime on Russian military support, this counter-intuitive calm is, most probably, set to break. 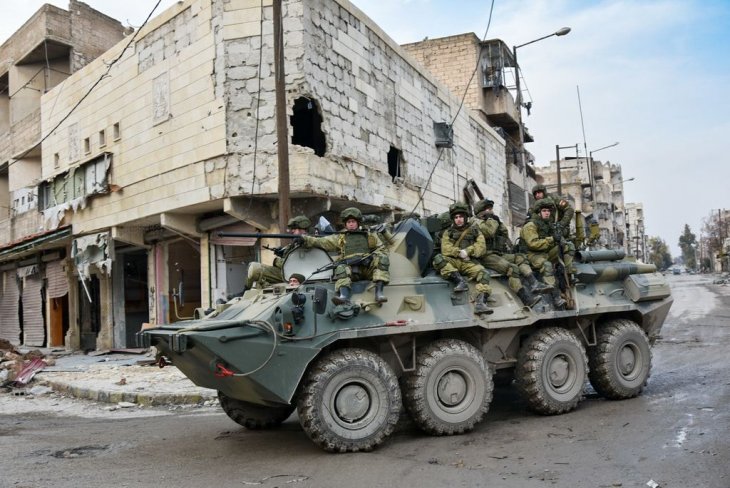 Russia launched its military intervention in Syria in September 2015 for multiple reasons, but one of them definitely was to distract international and domestic attentions from the deadlocked hostilities in Donbass, which had failed to cut from Ukraine a large enough chunk of territory to answer to President Vladimir Putin’s far-fetched proposition on “Novorossiya”. The deployment of a limited grouping of Russian forces to the complex overseas conflict was a risky gamble, but it has achieved some of its goals, so Putin had reasons to declare it a victory, in fact, a number of times.

Presently, Putin aims at a much greater victory in Ukraine, but the inherent weaknesses in the Russian military might, that were not really exposed through the Syrian campaign, have become starkly exposed. The inability of the Russian General Staff to execute a sequence of massive air strikes is particularly surprising, and the Syria-style combat missions performed by a pair of aircraft targeting (often very approximately) a stationary (and not necessarily military) object are quite ineffectual.

… the capacity for sustaining [Russian] combat activities in Syria is inevitably shrinking.

As the Russian armed forces are struggling to achieve a modicum of success in several stalled offensive operations from Kyiv in the North to Kharkiv in the East, and Mykolaiv in the South, the capacity for sustaining combat activities in Syria is inevitably shrinking. Local combatants in Syria are becoming increasingly aware of this decline in deliveries of crucial supplies for the al-Assad army by sea, particularly as Turkey invoked Article 19 of the Montreux Convention and closed the Straits for the Russian Navy.

The two years-old ceasefire arrangement for the Idlib province negotiated by Putin and President Recep Tayyip Erdogan is still holding, but various armed groupings are preparing to test Russia’s readiness to reinforce and protect its patrols. Declaring support for Ukraine is a cost-free tactic for the anti-Assad opposition to challenge Russian heavy-handed influence in Syria, but some kinetic engagements might not be far away.

Turkey has so far charted a very cautious course in the stormy Black Sea theatre and mediated a meeting between Russian and Ukrainian foreign ministers in Antalya last Thursday, which was predictably fruitless. Yet, as NATO expands support for Ukraine, Turkey’s space for maneuvering narrows and it may soon find itself added to the newly-revised Russian list of “hostile states”, which includes all European and several Asian nations, but none from the Middle East.

Turkey has supplied Ukraine with Bayraktar TB2 combat drones since 2019 and although it has not provided other military aid, the impact of the drones on Russia’s military campaign is heavy as the Russian army cannot – rather inexplicably – find a way to defend itself against these strikes.

The military setbacks make the drone issue a major political irritant for Russia, and tensions with Turkey might rise further as the Black Sea fleet, which was passive in the initial phase of the war, steps up its combat operations. NATO might have to deploy naval platforms for protecting Romania and Bulgaria, and Turkey wouldn’t then be able to distance itself from the fray.

Erdogan may choose to respond asymmetrically – in Syria.

Facing sanctions and threats from Russia, Erdogan may choose to respond asymmetrically – in Syria. Putin’s instruction to Defense Minister Sergei Shoigu to deliver and deploy “volunteers” from Syria to the Donbass war zone may be just a propaganda trick, but in reality the cohesion and morale of the al-Assad army (never close to satisfactory) can plunge with the curtailing of Russia supplies.

Turkey might seek to take advantage of the weakened position of the regime and Erdogan might be prone to abusing the disarray to shift domestic attention, away from the unfolding economic crisis and gain a new advantage in the looming elections in 2023.

Another regional actor seeking to minimize risks and explore opportunities emerging from the war-distorted great power relations is Israel. Prime Minister Naftali Bennet broke the Sabbath for talks with Putin in Moscow on March 5, and keeps the channels of communication open with all parties to the wide confrontation. One fruit of these efforts is the preservation of the “deconfliction” mechanism with Russia in Syria, as Israel continues airstrikes on the targets it deems militarily significant, like in the Damascus area on March 7.

Rapprochement with Turkey is a positive development, but the main worry for Israel certainly is the possibility of a new international agreement on the Iranian nuclear program, promoted by the Biden administration but effectively blocked by Moscow.

Syria is exhausted by war, which in mid-March passes the eleven years mark, but as nothing resembling a post-war reconstruction has started, the engines that could drive a new escalation of hostilities keep working, while world attention is now focused sharply on the Ukraine War.

Russian top brass is set to re-evaluate the sustainability of and rationale for the costly exercise in power projection to Syria.

Russia has made itself a major force in assuring the survival and dominance of the brutal al-Assad regime, but it has never established a solid Syrian support base for its intervention. Moscow’s international profile is now severely compromised, and its military might is badly damaged by the ill-planned and resource-consuming war. In the matter of a few weeks rather than months, Russian top brass is set to re-evaluate the sustainability of and rationale for the costly exercise in power projection to Syria.

The as yet hidden but fast-developing shifts in the complex interplay of local, regional and global agendas in Syria reflect deeper changes in the nature of transactional alliances in the Middle East. The al-Assad government cast its vote against the UN General Assembly resolution condemning Russian aggression, but it will hardly convince Moscow to keep propping it up. Some Middle Eastern actors might regret the decline of Russia’s profile and engagement, but many stand to benefit from the incapacitation of this renown conflict manipulator.

The US, EU and NATO made grave mistakes when they let Putin conquer and start war in Georgia in 2008 and declare independence of the two Georgian regions in Abkhazia and Samachablo. What did the US, EU and NATO do? Absolutely nothing! Merkel and Obama expressed concerns and closed the case. Therefore, Georgia’s 2008 invasion was Putin’s test run for bigger wars and military adventures. 100% Obama’s and Merkel’s fault! The US, EU and NATO leadership completely failed. Then what did Putin do? In 2014 Russia attacked and took over Crimea at first and then Eastern Ukraine, where the Russian forces directly and indirectly engaged in warfare against the Ukrainian state. What did the US, EU and NATO do? Absolutely nothing! They forced (Germany & France) Poroshenko to accept horrible Minsk treaties and the EU/US did hit Russia with the bare minimum of sanctions that did not amount to anything… This further motivated Putin to solve his political goals of restoring the Russian Empire through military means and bloodshed. Therefore, now we have this global disaster! That’s why Putin did dare to start another war of conquest of the free Ukraine to enslave its people and change their future, their destiny & limit their freedoms and turn Ukraine into the Russian subservient state. Now we have this bloodshed, war crimes and terror… Whose fault is it? It is Putin’s fault as much as it is the US, EU and NATO leadership’s fault who kept ignoring the international bully and turned blind eye on the atrocities committed in Georgia and Ukraine for the past 15 years! US, EU & NATO need to impose the No Fly Zone immediately! At least above the humanitarian corridors so that Putin won’t be able to continue killing the civilians and children.