Putin’s place at the long table in the Kremlin is more insecure than ever, and even though he will cling to power, it is not inevitable that he will succeed. 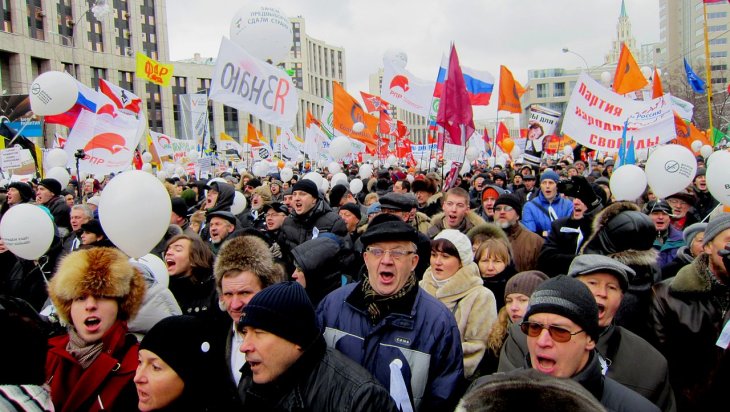 Fears that the so-called colour revolutions will spread to Russia have dogged Putin’s time in power.

Colour revolutions in two of Russia’s neighbours, Georgia and Ukraine, forced autocratic leaders out of power and an attempted colour revolution in Belarus came close to overthrowing Lukashenko after the country’s 2020 elections.

So far, the large-scale protests that followed Putin’s questionable re-election to the presidency in 2011–2012 are the closest that Russia has come to such a revolution. But could the war trigger a new popular movement capable of overturning the regime? Research into protest movements and regime change can provide us with some pointers.

… could the war trigger a new popular movement capable of overturning the regime?

It is unusual for a dictator to be deposed by a popular uprising, and few people are expecting a revolution in Russia.

At the same time, revolutions are by their very nature unexpected, especially in regimes as oppressive as Putin’s. Because of the brutal punishment meted out to the opposition, the vast majority of people will voice support for the regime, regardless of their actual views. Viewed from the outside, such regimes seem stable – right up to the moment when they’re suddenly not.

The Arab Spring was triggered when Mohamed Bouazizi, a Tunisian fruit and vegetable seller, set himself on fire in frustration over widespread corruption. This started a series of protests that culminated in regime changes in four countries. In other words: once someone declares their opposition, major consequences can follow.

No doubt Putin is acutely aware of this dynamic, and currently his regime is arresting even small groups of protesters in order to prevent protests from growing. Even so, we can identify several factors that may be blazing a trail for large-scale protests.

The more people that participate in protests, the more likely they are to succeed. Attracting large numbers of protesters depends on people knowing where and when protests will take place and being confident that many others will join them. While it is very risky to protest in a small group, large crowds provide a sense of safety. This sense of safety means that large protests can experience enormous growth. In Russia, there are signs of continual growth in the numbers of protesters.

Three coordinated protests have taken place so far, on 24 February, 27 February and 6 March. The size of these protests probably increased on each of these dates. When the invasion started in full on 24 February, at least 2,000 people were arrested. Ten days later, on 6 March, 5,000 demonstraters were imprisoned in over 70 Russian cities.

Activists use digital means to mobilize supporters, with the messaging app Telegram being particularly popular. Although the Russian regime controls the country’s traditional media with an iron grip, more and more information is getting past the digital censors.

Download and usage statistics for opposition news bureaux, the VPN services used to avoid censorship, and encrypted messaging apps suggest that the Russian population is increasingly able to access information from external sources. Research shows that protest movements can grow and spread via such platforms.

Opinion surveys in Moscow suggest that attitudes to the regime are undergoing change. These surveys are not representative of the country as a whole, but they do not need to be: popular mobilization in cities such as Moscow, St. Petersburg and Novosibirsk could be enough to get the ball rolling.

Autocratic leaders also make active use of social media in order to retain their grip on power. Putin’s ability to control the narrative may determine the extent to which the protests continue to grow. The regime does not necessarily need to convince the population of its own version of history, so long as it is able to derail the debate and generate enough uncertainty about the true course of events.

The urban middle class and an economy in crisis

Another important factor is the kinds of people who participate in protests. Some groups have greater influence than others. For example, a strike by munitions workers will have more impact than a demonstration by academics. At the same time, mobilization must be broad in order to be successful. The broader the spectrum of the social groups involved – trade unions, students, religious organizations and so on – the greater the chance of the protests undermining the loyalty of those who support the regime.

Perhaps the coming economic crisis will persuade the middle class to turn its back on Putin’s regime.

Historically, the middle class has been an important force in protest movements and democratization processes. The middle class exercises significant economic power and is frequently the source of demands for political institutions to be egalitarian and transparent. Previously, the Russian middle class has not been strongly represented in protests in Russia.

One explanation is that many middle-class Russians are either bureaucrats or employed elsewhere in the public sector. Accordingly, their interests may tend to lie in showing loyalty to the regime. But the economic sanctions and the costs of Russia’s war are going to have a severe impact on the middle class. Perhaps the coming economic crisis will persuade the middle class to turn its back on Putin’s regime.

In recent years, Russia has become more autocratic, with more power being concentrated in Putin’s own hands. Political scientists call this a personalist style of government. People with personal ties to Putin occupy the most powerful positions, both in politics and in the security services. Putin ensures these ties remain strong by giving large financial rewards for loyalty. Putin loyalists know that their affluent lifestyles depend on Putin remaining in power. But precisely because the regime is based on financial corruption, sanctions and economic decline can be particularly problematic for this type of regime.

One goal of the current sanctions is to reduce Putin’s access to the resources he needs to buy his supporters’ loyalty. However, Russia’s vast oil and gas revenues are softening the sanctions’ effect. These revenues are used not only to fund the war in Ukraine, but also to bribe oligarchs, ministers and military leaders in Russia. Research tells us that revenues from fossil fuels make autocratic regimes more oppressive and more stable.

So far, the regime has cracked down hard on demonstrators. And personalist leaders like Putin have no scruples about ordering bloodbaths if they are seen to be necessary. At the same time, violent attacks on peaceful demonstrators are risky because they are experienced as an illegitimate use of power and can turn otherwise loyal supporters, including those assigned to carry out the orders, against the regime. There is a greater probability under personalist regimes than under other styles of government that security forces will switch sides when encountering large protests, and Putin’s regime will fall if the security apparatus ceases to provide united support. Putin is not helped by the fact that so far the invasion appears to have been a mistake, and the war will be enormously costly for Russia.

Putin’s place at the long table in the Kremlin is more insecure than ever, and even though he will cling to power, it is not inevitable that he will succeed.

and even though he will cling to power, it is not inevitable that he will succeed

Putin will fall when the big men, we see in the security goon squads decide they identify with the protestors and stop arresting them. There are things that could be done to get the goons to switch sides such as going after their social support networks and exposing them, while also making public appeals to their sense of self preservation. Something similar happened in South Africa during apartheid.