In the weeks since Russia’s brutal invasion of Ukraine significant proportions of Ukraine’s population has gone on the move, the majority of whom are internally displaced.

By 29th March 2022, 4 million people had fled Ukraine across borders to neighbouring countries: Poland (2 million in 3 weeks), Slovakia, Hungary, Romania and Moldova (some reportedly to Russia). 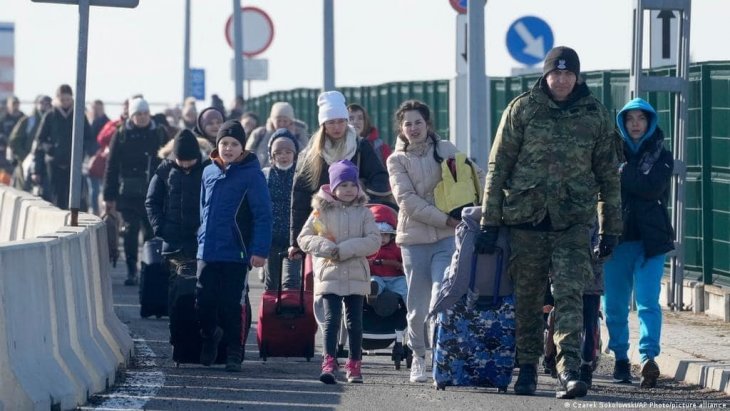 Ukrainian refugees from 2022, crossing into Poland. Photo: mvs.gov.ua via Wikimedia Commons / CC BY 4.0

In this blog post, we aim to contribute to the ongoing comparative reflections on the European Union’s response to sudden and large-scale arrivals of people across its borders, in 2015 and now.

Does it make sense to compare 2015 to today?

Against the backdrop of Russia’s war in Ukraine, some point to Europe’s double-standards, while others underscore Europe’s particular responsibilities ‘at home’. Affirmations of racism abound, backed by African students’ experiences of racist behaviour while escaping Ukraine, but also by the repeated pushback operations in the Mediterranean, and at Poland’s border with Belarus.

The war in Ukraine has produced an extremely compressed mass-displacement in 5-weeks so far. Seven years ago, more than a million refugees and other migrants arrived in southern Europe and moved north during the summer and autumn of 2015. Yet, this is an ongoing crisis.

The temporal dimensions challenge comparison. The war in Ukraine is unfolding with shocking speed. This time frame lies in contrast to the limbo that tens of thousands of refugees and other migrants are stuck in for years in camps in Greece, Italy or France. There, due to failing migration management, closely related to the failure of global protection in protracted displacement (see also here, here and here), people wait.

Beyond internal displacement, neighbouring countries are the main receivers of refugees. People who fled Syria went to Jordan, Lebanon and Turkey, before heading to Europe. People who are leaving Ukraine go to EU countries: Poland, Slovakia, Hungary, Romania, and non-EU member, Moldova. Proximity to conflict affects neighbouring countries: shelling can sometimes be heard across borders. Evidence suggests that Ukraine’s neighbours, to an extent, feel “next in line” to be attacked, shaping how the conflict is seen, and arguably also how refugees are welcomed.

People escape bombing in Ukraine, as Syrians escaped a decade earlier. By 2015, some were moving on from a relatively safer neighbouring country, where the situation had by then become strained. The experiences of refugees from Syria and Ukraine reveal two different dimensions of protection: immediate (out of harm’s way, often in the first neighboring country) and beyond (either in the first country of reception, or in countries further away, through resettlement programs, or with individuals opting to move on).

In 2022, insecurity and a humanitarian crisis rampage inside Ukraine. Crossing land borders occurs by car, train or on foot. Those escaping are traumatized by war. However, despite long queues, chaos and cold weather, the border itself is not the site of a humanitarian crisis because, in stark contrast to those who arrived in 2015, border crossing is both overseen and facilitated by border guards.

In 2015, people sought to reach Europe by sea: from Turkey to Greek islands, or from Libya to Italy. The lack of legal routes into Europe for those without visas, e.g. asylum seekers, turned the border itself into a site of humanitarian crisis. Their border crossing was and remains actively prevented by reinforced surveillance. Nonetheless, crossings continue: in 2021, some 1838 migrants died or went missing in the Mediterranean. The border between Belarus and Poland is another site where failed policies have turned into an extended crisis. In both instances, migrants at an EU border – no matter how they have arrived there – have a right to dignified treatment and to seek asylum.

Refuge in Europe – open for some, closed for the rest?

Questions about unequal treatment at the EU’s borders and the apparent underlying racism that causes it have repeatedly been raised. Recent examples include Ukrainians lodged in hotels in Calais, as opposed to others mainly from countries in Africa or the Middle East living in tents nearby. How can we compare the experience of a Sudanese man chased back and forth at the Poland-Belarus border, who was aided by volunteers, but was unable to apply for asylum, with that of Ukrainians who receive temporary protection upon arrival in European countries?

The question of refuge in Europe in other words, unveils dilemmas about where protection is granted, and for whom. These questions link to the rights and material benefits associated with international protection, which differ radically depending on where someone seeks asylum. While it is easy to identify examples confirming Europe’s ‘double-standards’, we argue that this is not enough. Rather, we need to face the dilemmas that failing systems of global protection keep producing.

Refugees and other migrants

A debate about whether Europe faced a “migrant” or “refugee” crisis followed, disregarding the fact that all refugees are also migrants, and all migrants have the right to dignified treatment. And at the border, all have the right to apply for asylum.

The distinction drawn between refugees and migrants is prone to dangerous misuse. Furthermore, blindly adopting state’s categories to describe and understand the real world, is problematic and inaccurate. To exemplify: should a Syrian person arriving in Europe to study be considered a refugee or a student migrant? Would a Ukrainian on a work permit in Poland before this war, who is now unable to return be referred to as a refugee or a migrant worker?

What can we learn?

The fact that more than 4 million people have been able to flee Ukraine (largely) across EU borders, in a few weeks, shows that much is possible. So, what can we learn?

What will happen next remains unclear, but there is always a risk that crisis mobilization mode fades; both for tired volunteers across Poland and in other neighbouring countries, and among EU states, which have yet to receive significant numbers of refugees.

But when this happens, how will neighbouring countries cope? The EU is offering support funds for countries aiding refugees, but long-term details remain to be specified. The current response to refugees in Europe should be considered an opportunity to address questions of protection for people globally, as it demonstrates what necessity and urgency can enable.