Predictions of a decisive offensive in Donbass and speculations about peace talks have gained new intensity in both Russian propaganda and Western commentary last week – and neither makes much sense.

Artillery and air strikes on the solid Ukrainian defense lines in several key directions on the battle for Donbass have escalated, but Russian battalions, exhausted by two months of unexpectedly hard fighting (and two moths of winter camping prior to invasion) are unable to gain any ground. 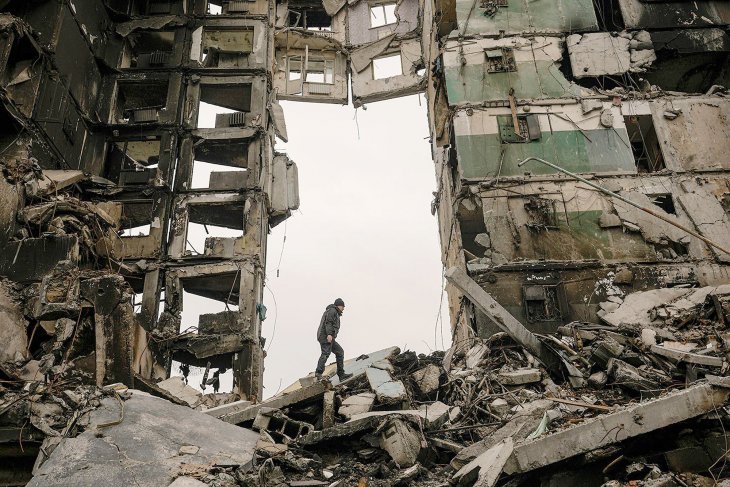 The visit to Moscow and Kyiv scheduled by UN Secretary General Antonio Guterres for this week (after both countries celebrated Orthodox Easter) is well-intended but most probably fruitless, as President Volodymyr Zelensky can only confirm his readiness to meet with President Vladimir Putin and the latter will blame Ukraine for sabotaging negotiations and reiterate the message given to Charles Michel, President of the European Council (RIA-Novosti, April 22).

The fact that negotiations continue through daily virtual talks was confirmed in Moscow, even if the positive spin was reduced by Foreign Minister Sergei Lavrov, who asserted that Russia wouldn’t tolerate and “ultimatums” from Ukraine (Izvestiya, April 22).

Zelensky had indeed previously stated that talks would be broken if Russia continued to murder the defenders of besieged Mariupol (RBC.ru, April 16). Putin responded by giving a direct order to Defense Minister Sergei Shoigu not to storm and merely to blockade the last bastion of armed resistance at the Azovstal steel plant (Kommersant, April 21).

The televised meeting provided Russian experts and bloggers with rare opportunity to comment on the small size of the table, which Putin was clutching with oddly rigid right hand, and on Shoigu’s public appearance after a long absence (Svoboda.org, April 22). The main point, however, was the substance of Putin’s seemingly sensible order, which might indicate doubts in the Kremlin about the propaganda-induced resolve in the inscrutable society for scoring a victory at any price (Nezavisimaya gazeta, April 21).

The futility of negotiations

The futility of negotiations is determined not by the complexity of issues related to security guarantees but by the firm Ukrainian demand for withdrawal of all Russian troops to the positions held prior to February 24, when the over-predicted war was started by Putin’s order (Meduza.io, April 22).

This plain proposition denies Russia any territorial gains, including the defiant Mariupol, and erases the land corridor to Crimes, which Moscow tries to consolidate by installing a puppet government in the partly occupied Kherson region (Grani.ru, April 21). Putin has never announced the intention for building such corridor, but the plan was spelled out by General Rustam Minnekayev, acting commander of the Central military district (Interfax, April 22).

The problem with this far-reaching strategic plan is not that it contradicts the more cautious discourse preferred by most of the top brass, but that it clashes with the situation on the ground, where Russian troops have retreated from Mykolaiv (NovayaGazeta.eu, April 20). Ukraine can not win the war by merely defending against Russian attacks, but the increased supply of heavy arms from US, as well as from the UK, the Netherlands and other European states, makes it possible to launch counter-offensive operations, aimed specifically on Kherson (Nezavisimoe voennoe obozrenie, April 21).

Moscow is irked and alarmed by these expanded deliveries not only because Ukraine becomes firmly anchored to the West, as the visit to Kyiv of US State Secretary Antoni Blinken and Defense Secretary Lloyd Austin has demonstrated (RIA-Novosti, April 25).

It is also upset because the Russian military-industrial complex targeted specifically by sanctions is increasingly unable to produce key weapon systems necessary for compensating the heavy losses (Svoboda.org, April 23).

Putin tried to cover this shortcoming by boasting about the first test launch of the Sarmat inter-continental missile, which he announced was ready for deployment back in May 2018 (Kommersant, April 22). Sarmat may become operational in another four years, but what matters now is the complete disorganization of Russian aircraft-building industry, which cannot obtain crucial technological components due to breakdown of supply chains (Riddle.io, April 18).

Problems with arms production may have a direct impact on the sustainability of combat operations, but they are merely a manifestation of deeper problems with Russia’s economy, which in Putin’s opinion, has withstand the “blitzkrieg” of Western sanctions (TheBell.io, April 23).

In fact, the sanctions were never supposed to deliver an instant disaster, but their impact is growing daily and no emergency funding from the federal budget can compensate for the inevitable shutdown of many production facilities (Nezavisimaya gazeta, April 20). The belief in the Kremlin that financial reserves (even if halved by Western measures) and the continuing inflow of petro-revenues ensure resilience of key industries betrays the ignorance about how modern economies function (Rosbalt, April 22).

The departure from Russia of most Western investors and brands affects not only the service sector but also the performance of crucial oil and gas infrastructure, and greatly amplifies the impact of sanctions, so there may be no particular need for Western policy-planners to design further tightening of this regime (Forbes.ru, April 22).

For the first two months of the war-caused calamity, unemployment has remained hidden by delayed layouts and temporary salary payments, but this summer millions of workers will find themselves redundant (The Insider, April 23).

Old Soviet methods of “command economy” cannot deliver any impetus to the Russian economy, which has grown profoundly dependent upon cooperative ties with Western partners, but Putin’s court has scant grasp of these complexities and prefers to believe that a little extra supply of money and plentiful supply of propaganda would keep the populace content (Meduza.io, April 20).

This mismanagement is as damaging for the struggling Russian economy as the persistent demands to deliver a convincing victory are for the execution of the military campaign.

The two initial blunders of Putin’s judgement – that the Ukrainian state would break down under the military assault and that the West would enforce only symbolic sanctions – keep Russia moving on the parallel tracks of unwinnable war and economic degradation.

The envisaged sequence of successes – first the complete occupation of Donbass, then the enforcement of ceasefire, and then the loosening of the sanctions regime – stumbles already on the military deadlock, but misconstrues badly both the Ukrainian defiance and Western resolve to deny the rogue Russia a victory. Every missile strike on Kyiv or Odesa adds to the momentum in turning the course of war toward Russia’s inglorious defeat.

I’m really appreciating your contributions on the Ukraine war. Keep them coming!