Women are an “integral part of her country and its resistance.” This was the message that Kateryna Cherepakha, President of the organization La Strada-Ukraine, communicated to the world when speaking before the UN Security Council in April.

Her speech also highlighted increased vulnerability of women and girls to the threat of kidnapping, torture and killing. We now know that the threats to women in Ukraine also include being targets of sexual violence. 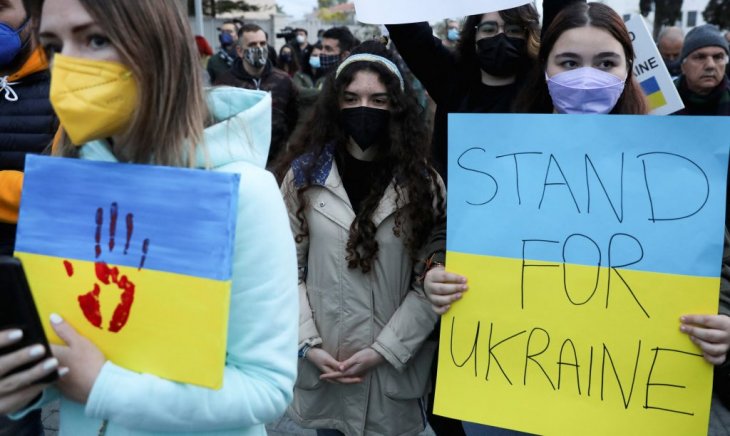 This text is available in Ukrainian here.

Yet, Cherepakha warned against viewing Ukrainian women as mere victims of the Russian military aggression. Focusing on women primarily as victims disguises their agency and contributions in the ongoing war. Fortifying stereotypical assumptions of women as victims only can reinforce ideas about the need for a protective culture in which women’s agency and power are belittled.

Despite both women’s agency and victimization in Ukraine, women have not been visible in the peace talks.

In a recent survey in Ukraine, we asked a series of questions that let us speak to the role of women in the war. The findings from this survey allow us to draw three main conclusions:

Below, we elaborate on these conclusions and what they might entail.

Armed conflicts tend to target men and women in somewhat different ways due to variations in the distributions of labor, gender roles, and stereotypical assumptions and constructions.

In Ukraine, stories of sexual violence have been documented by human rights organizations and mentioned in the media. Although sexual violence can affect men, women, and children, news reports from Ukraine have so far highlighted that women are primarily targeted.

93% have heard of rape or sexual assault by the Russian or pro-Russian force […] these figures are astonishingly high.

Survey evidence indicates that the vast majority of Ukrainians, about 93%, have heard of rape or sexual assault by the Russian or pro-Russian forces. The awareness of such cases seems to be about equal among women and men.

Moreover, 20% say that they personally know someone who has been raped or sexually assaulted by the Russian or pro-Russian troops since the invasion started on 24 February 2022.

Given that scholars of wartime sexual violence warn that the taboos and shame surrounding sexual violence often give strong concerns about underreporting, these figures are astonishingly high.

Research has increasingly shown that despite dominant images of male warriors and peaceful women civilians, women have played central roles in directly aiding military struggle throughout history and in many conflicts across the world. However, they have often done so in less visible support functions, something which could limit their ability to get recognition for their services to society post-war.

Since the war in Eastern Ukraine broke out in 2014, women’s direct engagement in the military operations and the armed forces has steadily increased and laws have been revised to address discrimination.

A previous survey in Ukraine, conducted in March 2022, established widespread intentions among Ukrainians to engage in the resistance against the invading forces. Although men, compared to women, appeared to be more willing to engage in military combat against the Russian forces, such willingness was also high among women.

In the first two weeks of April, a new round of the survey still finds that many women intend to engage in humanitarian assistance, support functions, and combat roles.

Specifically, 65% of Ukrainian women reported intentions (by replying “extremely likely,” “moderately likely,” or “somewhat likely”) to help the Ukrainian victims of war in terms of caring for injured civilians and soldiers.

In turn, 69% of women intend to help the resistance by providing non-military support to the Ukrainian forces, such as delivering food, information, or ammunition.

Finally, the survey shows that many intend to join the Ukrainian forces in some type of combat role, either in fortified defense positions and/or in open battles. 71% of men respond that they intend to join in combat roles. A substantial proportion of the women, 27%, also intend to do so.

The images of female bravery and female suffering during the ongoing war are contrasted by the images of often all-male teams on both sides in the series of peace negotiations undertaken between Ukraine and Russia from February 28 and onward. Ukraine’s negotiations therefore follow the pattern of most peace processes where women are mostly absent.

This occurs despite the fact that women’s inclusion in peace efforts has been a key international norm of Women, Peace and Security since 2000. Negotiations could set the future for all in Ukraine, including for women’s rights and security.

Women’s absence in this arena does not have support in the Ukrainian population. When asked whether they think the Ukrainian delegation to peace talks should include women representatives, the most common position among the Ukrainian population is to be in favor, 43%. Many are also undecided, and only 13% are against including women in the talks. Women are particularly supportive of women’s inclusion in the peace negotiations: 47% of the women are in favor, compared to 40% of the men.

Many arguments can be made for why women should be included on rights-based, moral and strategic grounds. Although we do not know what rationale Ukrainian respondents use to explain their position on this question, the resistance to including women in peace talks seems quite limited.

In asking the Ukrainian population about the role of women in the war, we have been able to document how women are integral to the resistance, as Kateryna Cherepakha has emphasized. An important next step should be to recognize women’s contributions at the political level in peace talks.

The current blog post is based on data that were collected as part of a larger project that interviewed Ukrainians over two survey waves (i.e., panel surveys). The first survey wave was conducted between 9 and 12 March 2022 and the second between 3 and 11 April 2022. Both waves were administered online in Ukrainian and Russian by a local survey agency: Info Sapiens. The survey agency aimed to generate a representative sample of the Ukrainian population between 18 and 55 years old, in settlements with a minimum of 50,000 residents. However, some of the Ukrainians who were beyond Ukraine’s borders, or in areas of intense military combat, were not reached by the survey agency. A total of 1,081 people were interviewed in the first survey wave, and 811 were reinterviewed in the second wave.

This blog post is based on the second survey wave (some analyses of the first wave are presented in the PRIO blog post: Henrikas Bartusevicius,(PRIO), Honorata Mazepus & Florian van Leeuwen ‘Will Terror Deter or Motivate Ukrainian Resistance? Survey Evidence from Besieged Ukraine’, PRIO Blog, 26 March 2022). This survey is likely the first to capture i.a. a population’s perspectives on women’s security and inclusion during an ongoing war. The statistics presented above were generated using sampling weights to represent population patterns.

The analysis and opinions in this summary and the blog should only be attributed to the authors. We thank Honorata Mazepus and Henrikas Bartusevičius for helpful comments.